For automakers, this was a tough market before the Pandemic: decades of stagnation in unit sales, carved up by more competitors, with industry revenue growth by jacking up prices. Then came the Pandemic.

The average age of passenger cars and trucks on the road in the US – light “vehicles in operation” or VIO – rose to another record of 11.9 years in 2020, according to IHS Markit. But this doesn’t yet include the effects of the Pandemic on the auto industry. We’ll get to that in a moment: 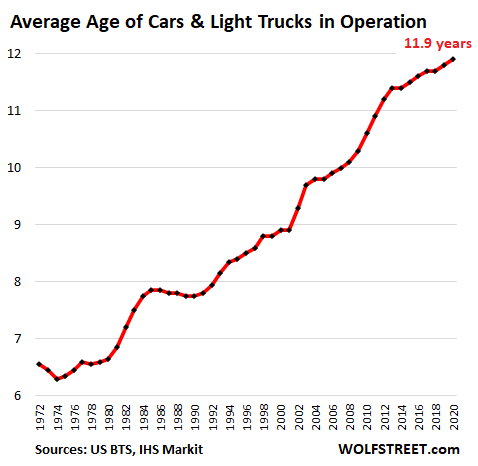 The rising average age of VIO is a mix of factors. One factor is that vehicles are lasting longer, and consumers feel less urge to replace them. Finicky, astute, and demanding customers relentlessly pressure automakers to out-do each other in order to survive and thrive in an ultra-competitive market that has been a zero-sum wild-ride, with slow ups and furious downs, and ultimately with no growth in unit sales for over two decades.

The impact of 2020 New vehicle sales.

Retail sales were still down in June compared to June last year, but were up from the dismal levels in April and May. I expect them to tick up further off those lows during the remainder of the year but remain significantly below where they’d been last year in the second half.

So I estimate that for the year overall, total new vehicle sales will be down 20%, give or take a couple of percentage points (red column). This is less than the drop during the Financial Crisis — which may turn out to be wishful thinking. By the green line, you see where this is going – namely back to the sales levels of the 1970s. And for automakers, this chart is a nightmare: 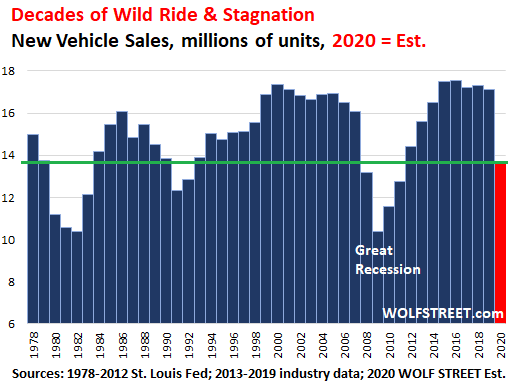 A big reason why there has been no growth over two decades is the increasing age of vehicles in operation.

From 1985 to 2020, the average age of VIO has risen by four years, from 7.8 years to 11.9 years. Back in 1985, as I was cutting my teeth in the car business, there was a lot of hand-wringing over the rising age of vehicles, and folks thought that the trend would have to reverse soon because Americans would get tired driving these old clunkers, and they would soon swarm dealerships to trade them in, and everyone would sell more and make more and be happy. And for a few years this happened, though very modestly. But in the 1990s, the trend turned around with a vengeance, with the average age going from record to record.

And sales in 2020 will be back where they’d been in the 1970s, and that this long-term stagnant market is being carved up by more automakers: The major new entrants since 1985 include Hyundai and Kia, both of which have eaten up a lot of share from other automakers, Mitsubishi as a franchised brand (though Chrysler had sold rebadged Mitsubishis for years), and Tesla. It’s hard to imagine a tougher industry.

Average age of vehicles in operation makes a huge difference in terms of how many new vehicles the industry can sell into this market, even if the size of the national fleet grows. And the fleet has grown. Americans operate more vehicles than ever. There are now 253 million cars, SUVs, vans, and pickups in operation in the US, according to the Bureau of Transportation Statistics. This does not include motorcycles, medium-duty and heavy trucks, and buses: 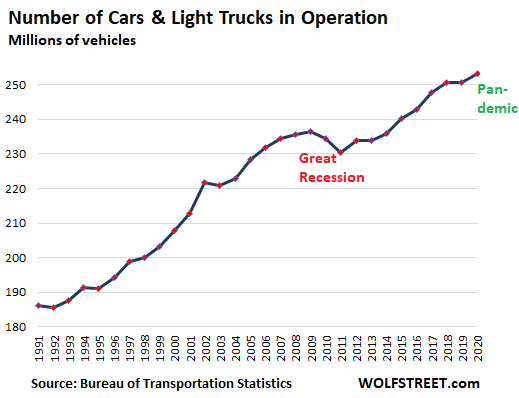 But note how the fleet-size dropped in the two years around the Great Recession, as new vehicle sales collapsed, and people drove what they had, drove less, or lost their cars and stopped driving.

During the Pandemic, at least in 2020, new vehicle sales have also plunged, and this is slowing the inflow of vehicles into the national fleet. And this has an impact next year and in future years on the average age of vehicles in operation: That inflow of new vehicles has drastically slowed, and the vehicles that are in operation are going to get driven longer before they’re scrapped. And that raises the average age.

Total miles driven in the US has a lot to do with commutes. If a lot of people are working, there are more commuting miles being driven. During an unemployment crisis, such as during the Great Recession or currently, fewer miles are driven – and vehicles last longer when they’re driven less, which further puts downward pressure on new-vehicle sales.

The chart below shows total miles driven per year, based on estimates from the Federal Highway Administration. It does not yet include the impact of the Pandemic – we’ll get to that in a moment: 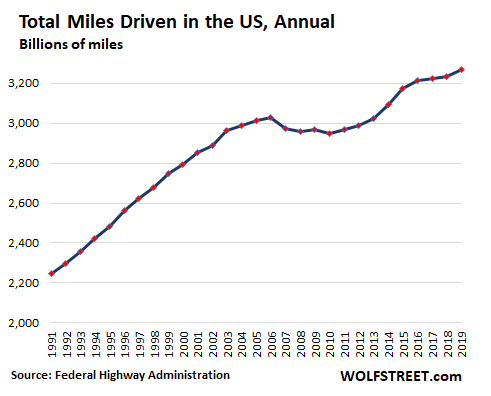 The pandemic, the lockdowns, and the unemployment crisis had a large impact on miles driven: In April they were down 40% compared to April last year. In May, the latest data available from the FHWA, they bounced off these lows, but were still down 25% year-over-year: 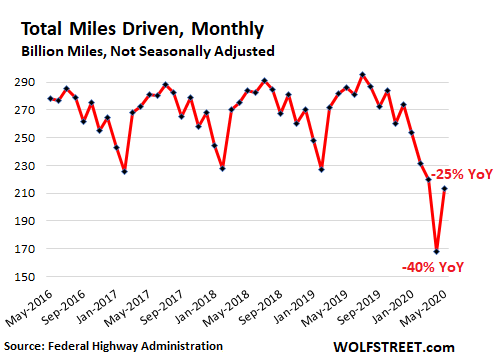 In May, there were 30 million people claiming state or federal unemployment insurance – and this was still the case in July. So, in terms of commuting, there won’t be much of a recovery in June and July. But people are driving to go on vacation, instead of flying – another one of those big shifts due to the Pandemic – and this will counterbalance to some extent the lost commuting miles driven over the summer.

For automakers, this was a very tough market before the Pandemic, with structural stagnation in unit sales, carved up by more competitors, where the only revenue increases come from jacking up prices. And they have done this exceedingly well.

269 comments for “Average Age of Cars & Trucks on the Road Sets Record, Will Jump During Pandemic as New-Vehicle Sales Plunge to 1970s Level”