The UK government this weekend delivered a hammer blow to Spain’s already battered tourism industry. On Saturday night — just two weeks after the government had dropped its two-week quarantine for travelers arriving or returning from a bevvy of European countries, including Spain — it backtracked once again: from midnight that night, it announced that all travelers arriving from Spain, where Covid cases are once again spiking, will face a 14-day quarantine.

On Tuesday morning, the UK changed policy once again. Travelers arriving from high-risk countries such as Spain will be tested for Covid eight days after they land. If they test negative, they will be able to come out of isolation two days later. If they test positive, they will have to remain in quarantine for the whole two weeks.

The quarantine rules are a nightmare for the approximately 1.8 million British holidaymakers either currently in Spain or about to go. Those already in the country now have to go through the rigmarole of informing their employers — assuming they still have one — that they will not be able to come back to work for between 10 to 14 additional days. They will also have to cancel any social engagements they had planned for the post-vacation period.

British tourists accounted for just over one in five of the 83 million visitors to Spain in 2019. Now, many of the tourists who were planning to come this summer will be staying at home or going elsewhere. Aside from reinstating the quarantine for arrivals from Spain, the UK government has also advised citizens to avoid all non-essential travel, not just to mainland Spain but also to its island archipelagos, which is likely to trigger a fresh tsunami of cancellations. The UK’s largest tour operator, TUI, has already axed all holidays to mainland Spain for the next two weeks.

That’s bad news, not just for Spain but for the whole of Europe. The sharp resurgence of Covid cases in Spain deals a heavy blow to any lingering hopes that the spread of the virus might be contained until at least Autumn, allowing tourism-dependent countries like Spain, Italy, France and Greece, to at least salvage something from the Summer tourist season. The UK has warned that it stands ready to apply similar “handbrake restrictions” to other countries in order to stop the spread of coronavirus.

It’s not just the UK that is reducing its exposure to Spain. Both France and Germany have advised their citizens not to travel to Spain’s northeastern region of Catalonia, which has witnessed one of the worst outbreaks. Norway has reimposed a 10-day quarantine requirement for people arriving from Spain. Belgium has announced a ban on all non-essential travel to the cities of Huesca and Lleida, as well as recommending a 14-day quarantine for travellers from Aragon, Catalonia, Extremadura, La Rioja and the Basque Country.

Taken together, these quarantine measures could end up costing Spain’s tourism industry an additional €8.7 billion in lost revenue, says industry group Exceltur. That’s on top of the tens of billions of euros that have already been lost due to the zero activity registered during the months of complete lockdown. Even in June, when the borders finally reopened, overnight stays in hotels were down 70% compared to the same month last year.

“Stay in the city and do not venture outdoors unless strictly necessary.” That was the recommendation issued ten days ago by the Catalan regional government to the residents of Barcelona and many of its surrounding suburbs.

Predictably, many did the exact opposite. Well-heeled residents hurriedly packed their bags and scattered to their second homes up and down the coast, with the result that many small coastal towns are now heaving.

Barcelona itself, already devoid of tourists, is like a ghost town, as the photo of the Sant Pere barrio, taken on Sunday afternoon, attests: 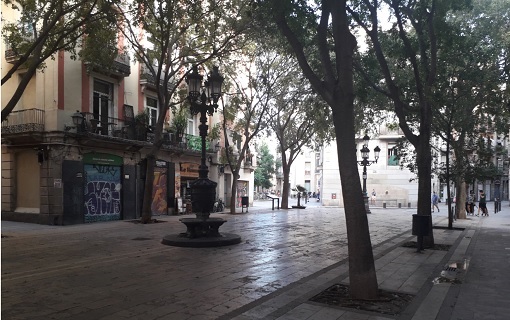 And here’s a beach shack on Bogatell beach in Barcelona at 12:30 on a Thursday, which would be busy on a normal summery day: 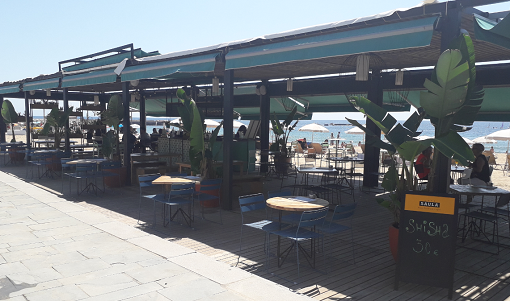 Similar scenes can be seen across myriad tourist destinations, from Mallorca to Tenerife, to Benidorm and Alicante, which would normally be swarming with international tourists at this time of the year. In many of these places, local residents have the beaches, bars and restaurants almost completely to themselves. Spanish — or in some places, Catalan, Valencian or Mallorquin — is once again the dominant language.

Many local companies that depend entirely on tourists for their income effectively have no business right now. It’s the reason why most hotels still haven’t reopened. Some never will. Many businesses that have a more balanced mix of customers (both locals and tourists) are hanging on in there. The question is whether or not they’re earning enough money to be able to take their workers off the government’s job retention program, which is scheduled to end in September, as well as have any hope of ever servicing the additional debt they’ve taken on to weather the storm.

For Spain’s economy as a whole, the loss in business just from this year could end up reaching as high as €83 billion. Tourism is as important to Spain as the automotive industry is to Germany, or the financial services industry to the UK. In 2019, it provided roughly 15% of Spain’s GDP and accounted for 13.5% of all jobs. It also played a huge part in Spain’s partial recovery from its housing crisis (2009-2013), creating more new jobs — albeit invariably of the low paid, short-term variety — than any other sector.

Roughly half of those jobs are now on pause. Others have simply disappeared. Even with the government’s job retention program, more than a million jobs were lost in the second quarter.

Now, the overriding fear is that the borders will soon slam shut again. And the lockdowns will recommence. Although the French and Spanish governments deny they are considering closing the border, new cases of coronavirus continue to surge across Spain, from the northernmost reaches of Catalonia, Aragon, Navarre and the Basque Country to the southern regions of Alicante, Extramadura and Castilla La Mancha.

The main vector of contagion appears to be teenagers and young adults, doing what young people have always done during the long, hot Spanish summer: spend their days meeting up with friends, going to the beach or swimming pool and having oodles of fun. When the sun goes down, the action moves to late-night bars, nightclubs or quiet street corners, where youngsters while away the hours sharing all kinds of smokes, vapes, and alcoholic drinks. And in some cases, the virus.

In recent days, Catalonia and other regions have tried to stem the tide by closing late-night bars, nightclubs, cinemas, cultural centers and casinos. But it’s probably too little, too late.

Since Friday, Spain’s Department of Health has registered over 6,000 fresh cases. After a months-long downward trend, cities such as Barcelona, Zaragoza and Madrid are seeing a fresh surge in new infections, prompting the government to warn that a second wave could soon be imminent. The reality is that the last wave never really ended. While the politicians were planning for a second wave in October or November, Covid seems to have just stuck around.

“The fresh spikes are taking a terrible toll.” laments Carlos Garrido, president of the Spanish Confederation of Travel Agencies (CEAV). “In the end, it’s all about confidence, fear, and the economic crisis. And what the fresh outbreaks do is aggravate that situation.” By Nick Corbishley, for WOLF STREET.

51 comments for “A Midsummer Nightmare for Tourism: UK, Other Countries Impose Quarantine Requirements on Returnees from Spain as Virus Cases Surge”