The market has come to totally depend on the “Giant 5.” A scary out-of-whack weight on the way down.

The “Giant 5” – Apple, Microsoft, Amazon, Alphabet, and Facebook – had another good day on Friday, with their combined market capitalization rising by 0.6% to another new high of $6.64 trillion, continuing a spike that started on March 16 and now measures 62.2%. In dollar terms, five stocks gained $2.54 trillion in less than four months.

Even these days, when trillions fly by so fast that they’re hard to see, that’s still a huge increase in market value of just five companies in the span of three-and-a-half years (market cap data via YCharts): 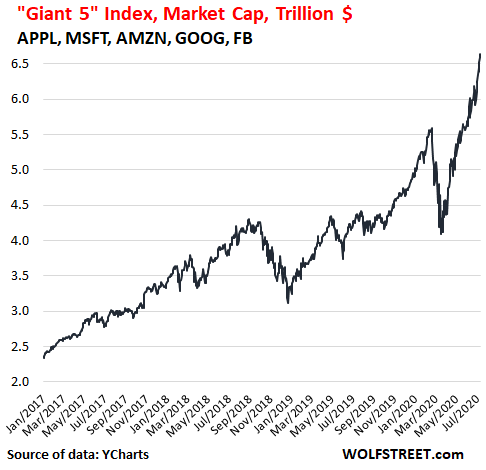 The market capitalization – the number of shares outstanding times the current share price – of the Giant 5 has reached a breath-taking magnitude:

How big are they compared to the entire stock market? 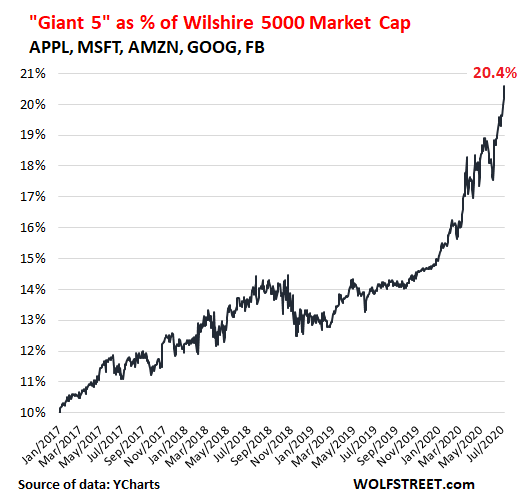 In other words, without the Giant 5, the rest of the market combined was a dud. And this is what has been happening for years!

The Market Minus the Giant 5.

To see how the rest of the market is performing without these five stocks, I have created the “Wilshire 5000 minus the Giant 5 Index.” This shows what’s left of the entire stock market of 3,415 stocks, after removing these five giants.

In other words, the rest of the stock market – all its winners and losers combined – without the Giant 5 and despite the horrendous volatility has gone nowhere since January 2018: 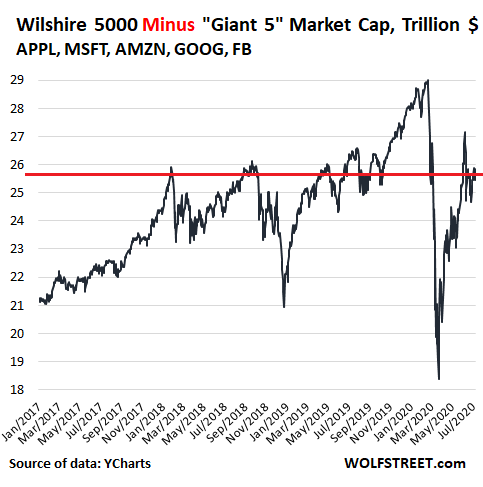 A miserable savings account would have outperformed the overall stock market without the Giant 5, and would have done so without all the horrendous volatility of the two sell-offs. Just five stocks whose market values have soared beyond imaginable magnitude pulled out the entire market.

And that’s a scary thought – that this entire market has become totally dependent on just five giant stocks with an immense concentration of power that have now come under regulatory security. And just as these stocks pulled up the entire market, they can pull down the entire market by their sheer weight.

The end of QE was three weeks ago. Now repos and dollar liquidity swaps on the Fed’s balance sheet are on their way out. SPVs declined. The Fed hardly bought any corporate bonds & ETFs. MBS were flat. Treasuries ticked up. Read… QE Unwind Speeds Up: Fed’s Assets Drop $85 Billion. Four-Week Total -$248 Billion. Big Chunk in a Short Time

220 comments for ““Wild Ride to Nowhere”: APPL, MSFT, AMZN, GOOG, FB Soar to New High. Rest of Stock Market is a Dud, Has Been for Years”