Even manufacturers, after months of crushed commodities prices, experience inflation and are able to pass it on. Stimulus money the government and the Fed have thrown around by the trillions.

It seems somewhat counter-intuitive in this crisis that companies in the services and non-manufacturing sectors – which dominate the US economy – would report higher input prices and higher sales prices. And there are now also smaller pricing pressures cropping up in the manufacturing sector.

“Inflationary pressure returned as both input prices and output charges rose for the first time since February, with both increasing at solid rates,” reported IHS Markit this morning in its Services Purchasing Managers Index (PMI) for June.

PMIs are based on responses from executives about their own companies – if particular activities are higher, unchanged, or lower in the current month than they’d been in the prior month. No quantitative measures or dollar amounts are involved.

“Inflationary pressures intensified for the first time since February at the end of the second quarter, as both input prices and output charges increased,” IHS Markit added in its Services PMI.

“Companies registered a solid rise in cost burdens as some suppliers hiked prices following the resumption of operations at service providers. The rate of input price inflation was the fastest since February 2019,” it said.

“In response to higher input costs, firms partially passed on higher supplier prices to clients through greater selling prices. The increase was solid overall and the sharpest for 16 months,” it said.

Even more inflation pressures cropped up this morning in the Institute of Supply Management’s Non-Manufacturing ISM Report On Business.

Prices that companies paid in June increased at a “faster” rate than they’d increased in May, the third month in a row of month-to-month price increases. In these PMIs, a value over 50 means an increase in the current month from the prior month; a higher value means a sharper increase.

Of the executives in the survey, 34.6% said that prices at their companies in June moved higher and 56.8% said prices didn’t change. Only 8.6% said that prices fell. This cause the PMI’s price index to jumped to 62.3 in June from 55.6 in May, the largest increase in points since August 2012: 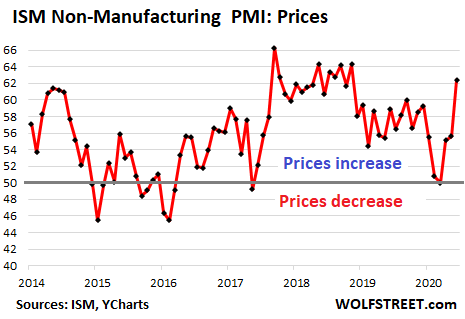 Of the 17 industries in the non-manufacturing PMI, 14 reported an increase in prices that they had paid in June, listed in order:

And three non-manufacturing industries reported a decrease in prices that they had paid:

The services industry accounts for about 70% of the economy. And that’s where price pressures will be felt the most, and will be, or are already being passed on to consumers.

But price pressures are also returning in manufacturing.

“Inflationary pressures picked up, as both input costs and output charges rose for the first time in the second quarter,” IHS Markit reported on June 1 in its manufacturing PMI.

It said that “cost burdens rose in June as suppliers hiked their prices due to logistical issues and higher shipping costs.” And “firms partially passed on greater input prices to customers through higher selling prices.”

For these manufacturers, the increase in input prices “was only marginal,” and “the increase in output charges was only slight as firm sought to remain competitive under challenging demand conditions.”

The Manufacturing ISM Report On Business by the Institute of Supply Management also pointed at price increases in the manufacturing sector, after sharp price declines in prior months as some commodities prices had collapsed. Its manufacturing price index jumped over 10 points to 51.3 in June, “indicating raw materials prices increased after four consecutive months of declines.”

One Purchasing Managers Index said services fell further in June, but more slowly; the other said activity started climbing out of the hole. Both agree: Jobs dropped further. Read… A Word About that Historic Bounce in US Services PMIs: No, the Service Sector Didn’t Hit New Highs. It Stopped Plunging

114 comments for “Seems Counter-Intuitive in This Crisis: Inflation Heats Up for Services Firms, and They’re Able to Pass it on via Higher Prices”