OK, this balance-sheet shrinkage, now in its fourth week, is going faster than I’d expected. Total assets on the Fed’s balance sheet for the week ended July 8, released this afternoon, dropped by -$85 billion, the fourth week in a row of declines. This brought the four-week total drop to -$248 billion: 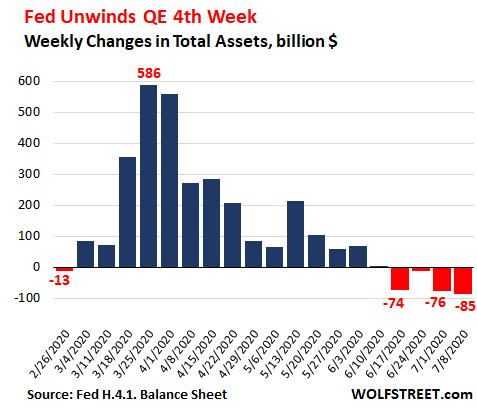 Back on April 9, when markets were just emerging from chaos after the Fed had thrown $1.5 trillion at them in the span of four weeks, Fed Chair Jerome Powell said in a webinar at Brookings that “when private markets are once again able to perform their vital functions of channeling credit and supporting economic growth, we will put these emergency tools away.”

This matched what he and other Fed officials had said in the year or so before the Crisis, that at the “next crisis,” they would throw all the Fed’s might at the problem up front, and then they’d back off, rather than let QE drag on for years. And they did.

By peak-QE in early June, the Fed had increased its assets by $2.86 trillion. It has since then whittled this increase down by $248 billion. Note the systematic front-loading then tapering the asset purchases and letting assets top out at $7.16 trillion, and then letting them decline, now down to $6.92 trillion: 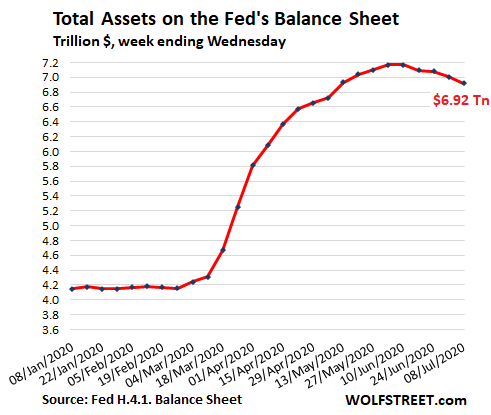 Repo balances dropped to Zero. The Fed made repos less attractive over time. On June 16, it raised the bid rate, and for market participants there are now better deals available in the repo market. The Fed is still offering theoretically huge amounts of repurchase agreements every day, but there are no longer any takers: 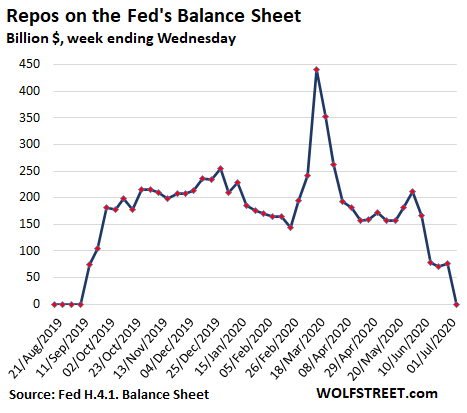 The Fed’s gaggle of Special Purpose Vehicles (SPVs) have been one of the most media-hyped “tools” of the Fed, and yet, they have remained small, in terms of Fed-sized quantities. The Fed claims that these SPVs are authorized under Section 13 paragraph 3 of the Federal Reserve Act, as amended by the Dodd-Frank Act.

The way these SPVs work: The Fed creates an LLC. The Treasury Department puts in equity capital – taxpayer money as loss protection for the Fed. The Fed then lends to the LLC at a leverage ratio of 10 to 1. The LLC buys securities or lends, secured by collateral. The alphabet-soup list has been growing over the weeks:

The total combined balance at these entities declined by $2 billion from the prior week and has now been roughly flat for three weeks. The original three entities (dark blue, gray, and black) are being unwound. And new ones have been added.

The largest SPV is the PPPLF (red), at $68 billion, down a smidgen from the prior week. It buys forgivable PPP loans from banks. These loans are now starting to unwind as they’re being forgiven (taxpayers pays) or paid back by the borrower.

The second largest, the CCF (yellow), edged up $700 million from the prior week to $42.6 billion. This entity buys corporate bonds, bond ETFs, and corporate loans. This was the most ballyhooed of all SPVs, and it has essentially remained flat for four weeks.

Third largest, the MSLP (baby-blue) has remained flat for the third week in a row, at 37.5 billion. It buys loans from banks that they extended to small and medium-size businesses. 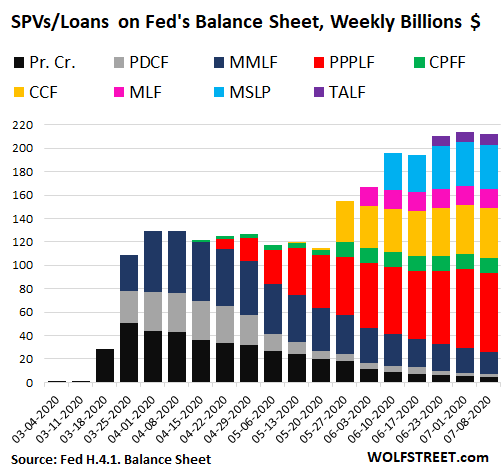 Total swaps fell by $46 billion to $179 billion, lowest since March 18. This indicates that the dollar panic overseas has dissipated. The lion’s share of the Fed’s swaps remains with the Bank of Japan – $132 billion, or 74% of the total. The Bank of England (BOE) and the Reserve Bank of Australia have essentially unwound their swaps with the Fed: 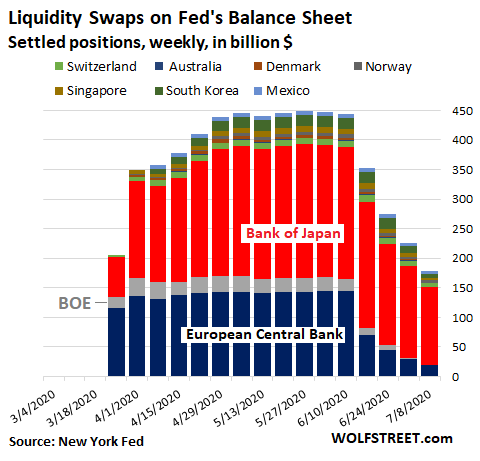 The increases in the balance of Treasury securities have been range-bound over the past seven weeks between $9 billion and $26 billion a week. This is where the Fed did a lot of heavy lifting up front: 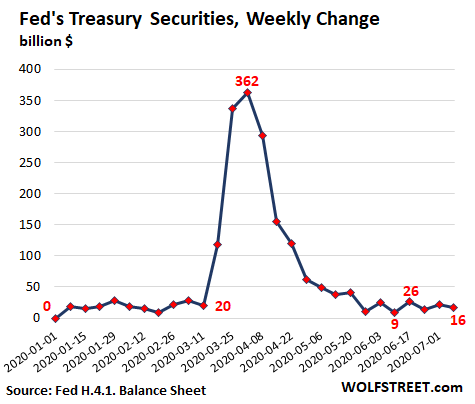 Treasury securities, now at $4.22 trillion, are by far the Fed’s single largest asset category. In its huge Treasuries portfolio, securities mature every month. The increase in the balance sheet is the net of new purchases minus redemptions. Since early March, the Fed has added $1.7 trillion in Treasury securities: 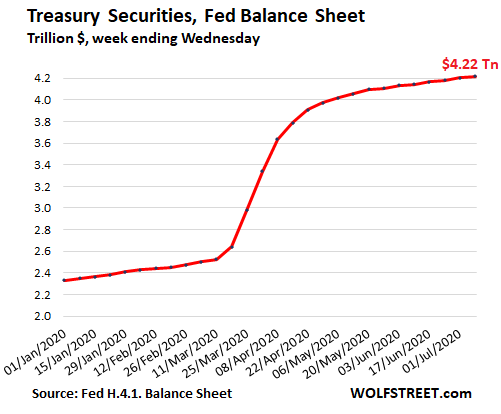 Mortgage-backed securities have two characteristics that cause erratic movements on the Fed’s balance sheet:

MBS trades take months to settle. The Fed says they usually settle within 180 days. But most of the time, they settle in 1-3 months. And the Fed books MBS trades after they settle.

So what we see on the balance sheet are not this week’s purchases, but a mix of pass-through principal payments and MBS purchases from weeks or months ago that settled this week. Hence the erratic chart. This week, MBS have remained flat at $1.91 trillion: 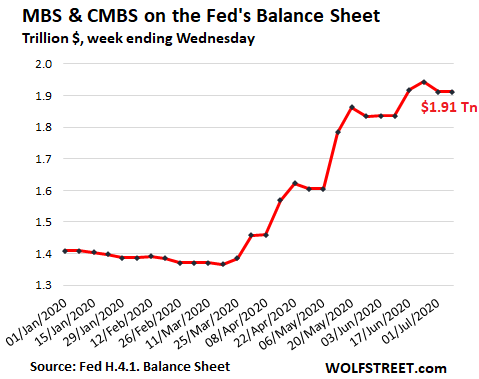 That $248-billion drop in assets in four weeks is a pretty good chunk, even for the Fed’s gigantic balance sheet that was $7.17 trillion four weeks ago.

I lambasted the Fed for this massive bailout in March, April, and May of the riskiest hedge funds and mortgage-REITs, and the biggest asset holders in the world, to protect them from capitalism’s way of cleaning up those kinds of things. I lambasted the Fed for bailing out asset holders and making sure they don’t have any skin in the crisis while America was in turmoil. So I support the Fed’s backing off this craziness. But obviously, the Fed can turn around on a dime. And every week, the balance sheet may offer unexpected twists and turns.