Still waiting for the “Pent-up Demand.”

Tentative hopes that the UK’s housing market would stage a swift recovery in June, the first full month of market trading since the lockdown began on March 26, were dimmed by the Bank of England’s latest release of mortgage approval data. Approvals of mortgages to purchase a home tumbled to 9,300 in May, their lowest level on record, from an already unprecedented low of 15,851 in April. They were about 60% below the low point during the Financial Crisis and were down 87% from February, the last month of normal economic activity. 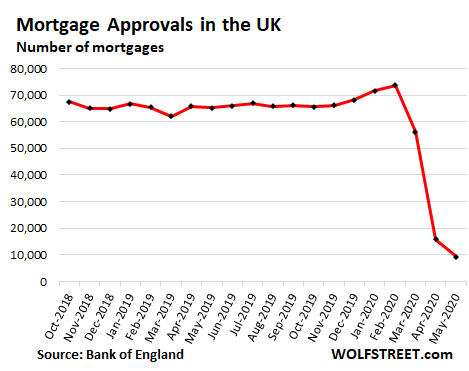 Economists polled by Reuters had expected mortgage approvals to rise to 25,000 in May as interested buyers flooded back into the market. But that didn’t happen.

Mortgage approvals are a forward-looking measure for home sales, due to the lag between the approval of a mortgage and the closing of a home sale, suggesting that home sales in June could slow further still, despite any the pent-up demand.

Pricing in June already bent under pressure. House prices in June fell 1.4% from May, seasonally adjusted, after having dropped 1.7% in May from April, according to the Nationwide House Price Index this morning. The index, at £216,403, was down 0.1% compared to June last year, the first year over year decline since 2012, the tail end of the housing bust. 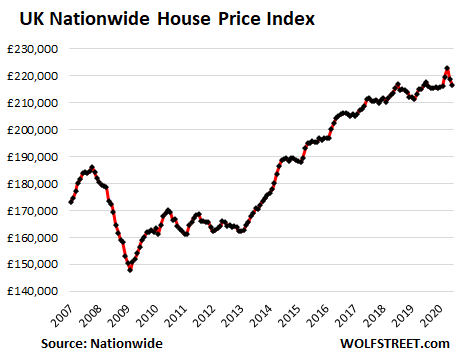 House sales volume, which had collapsed to a historic low in April, rose by 16% in May from April, largely as a result of the lifting of housing market restrictions in England on May 13, according to provisional figures published by HM Revenue and Customs (HMRC). But at 48,450 residential property transactions, sales were still down by 49.6% year-over-year.

Over the last 12 years — except for the one-month wonder in March 2016, when a mad scramble ensued to front-run the government’s Stamp Duty Land Tax increase on second properties and buy-to-let properties — housing sales in the UK never came close to recapturing the frenetic pace of activity that existed just before the Global Financial Crisis, when monthly sales of more than 140,000 were a regular occurrence. In the three years before Covid, monthly transactions ran in the 100,000 range. 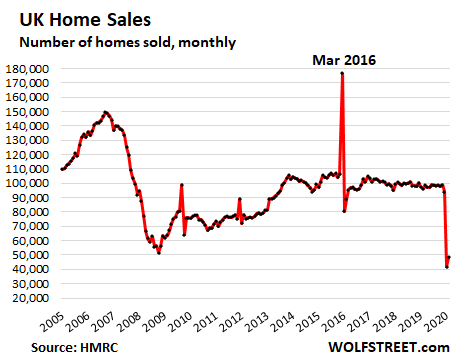 “The vast majority of these transactions will represent sales put on hold by the coronavirus shutdown so, at this point, HMRC’s figures are not an indicator of how buyers and sellers are flooding back to the market, said Andrew Southern, chairman of property developer Southern Grove.

Reports coming out from estate agents such as Zoopla and Rightmove paint a rosier picture of housing demand in this post-lockdown era going forward. According to Rightmove, pent-up home mover momentum in early June translated into the market’s best-ever week outside London as buyers flocked back into the market.

Comparing May 13-June 4 with the same period last year, estate agents have agreed 40,000 new sales since the market reopened in England, which means they’re now down 36%, instead of being down 94% when the market was closed.

Buyer interest is also bouncing back in other parts of the UK, such as Wales and Scotland, where market restrictions were lifted later than in England. The bounce-back could be short-lived as the pent-up demand begins to lose steam and the latent economic effects of the lockdown put further pressure on households. By Nick Corbishley, for WOLF STREET.

A zombie before the pandemic, the UK company had racked up huge debts to finance rapid growth in a sector that had started shrinking some time ago. Read… Mall Giant Intu Collapses Into Bankruptcy

13 comments for “UK House Prices in June Fall for First Time Since 2012, Mortgage Approvals Slump to Record Low Despite Reopening”