The $2,400 in stimulus that a couple received in April made a great down-payment for a car in May. If it was used as a down-payment, the loan itself multiplied the consumer-spending effect. Instead of spending $2,400 on other stuff, the couple might have spent $24,000 on the car, with rest of the money being borrowed. But it’s the $24,000 that counts as consumer spending in May, and the $2,400 that counted as income in April.

And so, consumer spending in May jumped by 8.2% from April, to a seasonally adjusted annual rate of $13.16 trillion, according to the Bureau of Economic Analysis this morning, as households spent this federal money-from-the-sky. But compared to May last year, spending remained down 9.3%, after having collapsed by a historic 12.6% in April. The May bounce, as magnificent as it was, brought spending back to where it had been in March 2017 and reclaimed only about one-third of the decline since February: 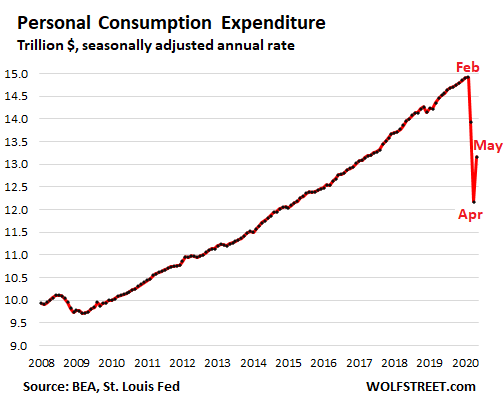 Income is a federal-money-from-the-sky story that has begun to unwind in May and will unwind further in June and July unless more federal manna gets dropped on the people.

In March, income had dropped 2.2% from February because people were getting laid off in mid-March, and the stimulus checks and unemployment checks had not arrived yet. In April, the federal money started dropping from the sky onto the people, and income soared by 10.8% from March.

In May, that federal money was still dropping from the sky, but at a reduced rate as many people had already gotten their stimulus checks, and income dropped by 4.2% from April. In dollar terms, income in May fell to a seasonally adjusted annual rate of $19.84 trillion, from the stunning federal-money-from-the-sky record in April: 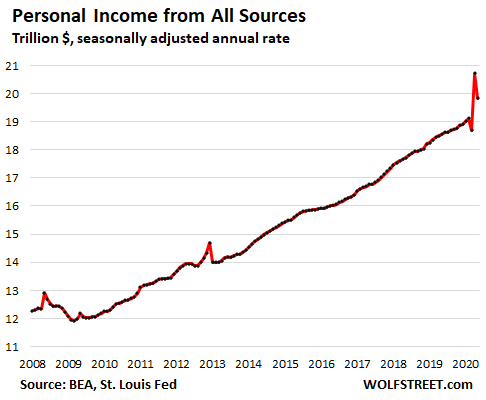 Without the stimulus manna, personal income just from wages and salaries had dropped in April by 7.6% to the lowest level since September 2017. In May, it ticked up one tiny bit from those low levels to a seasonally adjusted annual rate of $8.73 trillion: 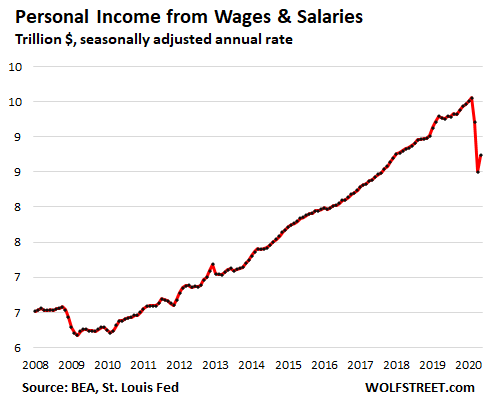 The stimulus funded many things, from food to garden supplies and bicycles. Many of these retail categories have soared in March, April, and May. A lot of it was spent online. Since vacations to distant locations were off the table, this money was mostly spent in the US, though much if it was spent on imported goods.

The stimulus money also allowed people to pay rent and make mortgage payments. The unemployment compensation, particularly the federal $600 a week, also helped households maintain or even increase spending, now that many people were making more money than they’d made while working. This is a bizarre world.

151 comments for “A Federal-Money-from-the-Sky Story”