The Big Shift: Fed shifts to propping up consumption rather than asset prices.

There have been endless announcements by the Fed that they will add this and that to their asset-purchase programs. The media jumped all over these announcements, how the Fed is going to get into the junk bond market and ETFs with hundreds of billions of dollars. Each time, all kinds of hoopla broke out in the markets with stocks soaring and junk-bond ETFs soaring, and everything soaring – despite the worst economy in memory, despite 30 million people on unemployment insurance, and despite shocking earnings reports heading our way.

The Fed has set up an alphabet soup with 10 of these programs so far – and it has been buying some of the assets it said it would buy, but it also has been shedding alphabet-soup assets it had bought in March and April, while whittling down its purchase programs of Treasuries and MBS for the past two months. And repos unwound, and dollar liquidity swaps unwound, and now total assets on the Fed’s balance sheet for the week ended June 17, released this afternoon, actually shrank by $74 billion:

This $74 billion decline in total assets during the week was powered by a plunge in repo balances and foreign central bank liquidity swaps, while some alphabet-soup programs also unwound. And the junk-bond and ETF buying program stalled.

And there is a big shift happening: The Fed has started lending to entities, including states and banks, under programs that channel funds into spending by states, municipalities, and businesses, rather than into the financial markets. These types of programs are propping up consumption – not asset prices. That’s a new thing. I don’t think the hyper-inflated markets, which have soared only because the Fed poured $3 trillion into them, are ready for this shift.

The $74 billion in total assets that the Fed shed during the week brought the Fed’s total assets down to a still breath-taking $7.095 trillion. You can see from the curve that this isn’t an accident, but part of a plan to front-load QE and then back off – rather than let it drag on for years: 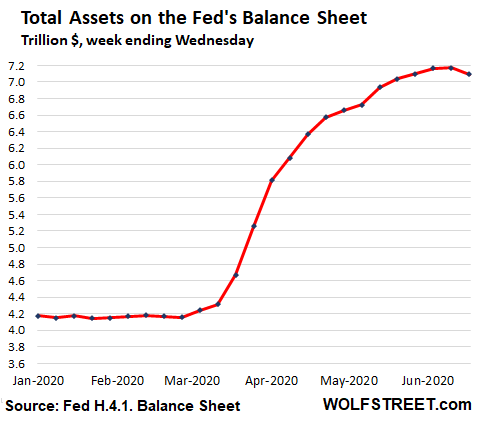 The Fed is still offering theoretically huge amounts of repos every day, but it has tweaked the offering terms, so that there is now almost no appetite for them, and what’s left on the balance sheet are older term repos that unwind and are gone. On today’s balance sheet, the repo balances dropped by $88 billion from the prior week to $79 billion, the lowest since September 18: 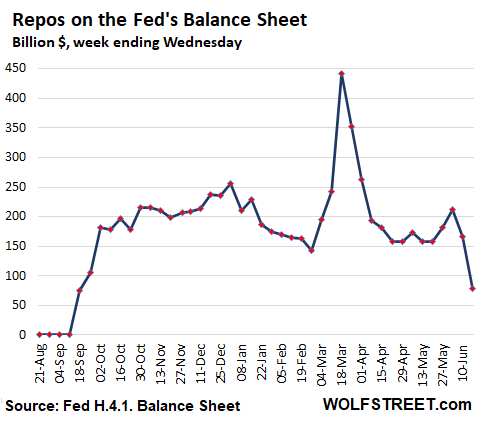 The Fed’s “dollar liquidity swap lines” with other central banks had been roughly flat for seven weeks, after the $400 billion surge in early April. But this week some swaps matured and were unwound, and the balance dropped by $92 billion to $352 billion. Of that drop, $75 billion came from the swap line with the ECB, $9 billion from the Bank of Japan, and $7 billion from the Bank of England (country data via the New York Fed): 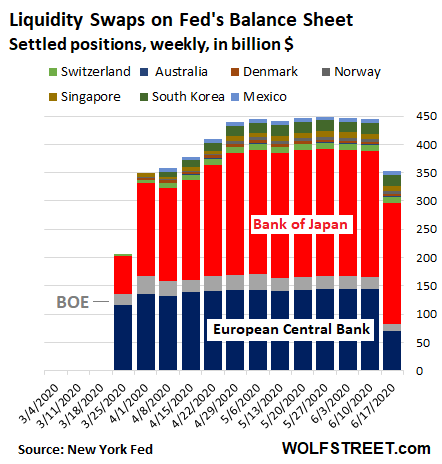 With these swaps, the Fed lends newly created dollars to other central banks and takes their domestic currency as collateral. When the swap matures, the Fed gets its dollars back, and the foreign central bank gets its currency back.

This is where much of the media hype has focused on, following the endless announcements by the Fed. The Fed says that these bailout schemes are authorized under Section 13 paragraph 3 of the Federal Reserve Act, as amended by the Dodd-Frank Act. And Powell calls these creatures “thirteen-three facilities.”

Under the program, the Fed creates a Special Purpose Vehicle (SPV) as an LLC. The Treasury pads it with taxpayer equity capital. The Fed lends to the SPV with a leverage ratio of 10 to 1. Then it’s off to the races, with the SPV buying up the entire world, or so it would seem, according to the media.

The number of SPVs keeps growing. There are 10 active ones on today’s balance sheet. But in dollar terms, by the Fed standards, they’re small. After an initial burst in early April of $130 billion spread among the first three SPVs, there came a lull, and the overall balance declined. New SPVs were added, but as the balance of the first three SPVs declined, the overall balance also declined until mid-May.

Starting in late May, the new SPVs added enough so that overall balances began rising, and reached $196 billion by June 10. But this week, the overall balance ticked down by $1.6 billion: 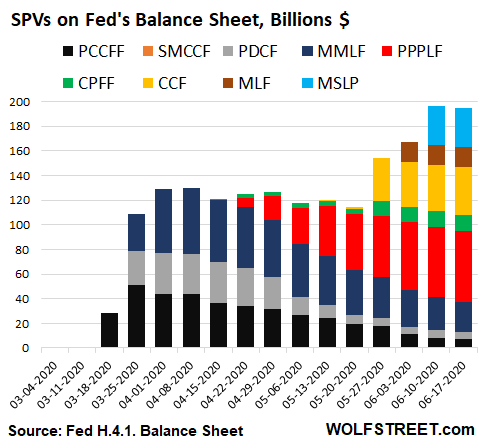 Only two SPVs grew this week, and only by tiny amounts: The Corporate Credit Facility (CCF, yellow, buys corporate bonds in the secondary market) ticked up by $1.5 billion in the week to $38.9 billion. The Paycheck Protection Program Liquidity Facility (PPPLF, red, buys government-guaranteed forgivable PPP loans from banks) edged up by $600 million to $57.6 billion.

All other SPVs declined in the week. The new kid on the block this week is the revived and reviled TALF, which is not yet part of my chart because it has a small negative balance, a sign that it is not fully operational just yet.

If the markets were hoping that the Fed would buy up half of the junk-bond market and pile willy-nilly into ETFs, well, it isn’t happening.

There are now three SPVs that route funds into consumption rather than asset purchases: The Paycheck Protection Program Liquidity Facility ($57 billion), the Main Street Lending Program ($32 billion), and the Municipal Liquidity Facility ($16 billion). This is not QE but more like paying businesses and municipalities, and ultimately workers/consumers, to consume. This money is circulating in the economy rather than inflating asset prices.

The Fed added $26 billion of Treasury securities during the week, bringing the total to $4.17 trillion. Over the past four weeks, the balance increased in a range between $9 billion in $26 billion, about the same range before the outbreak of bailout mania: 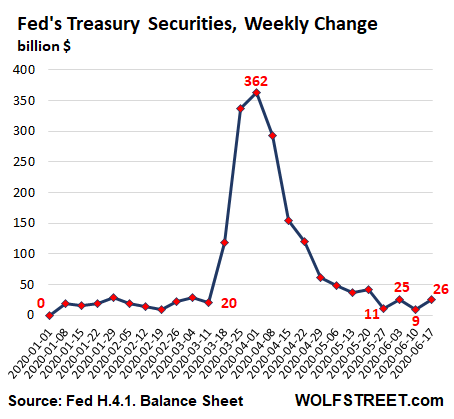 This progression of the Treasury purchases, from front-loading to tapering, is visible in the flattening curve of total Treasuries on the Fed’s balance sheet: 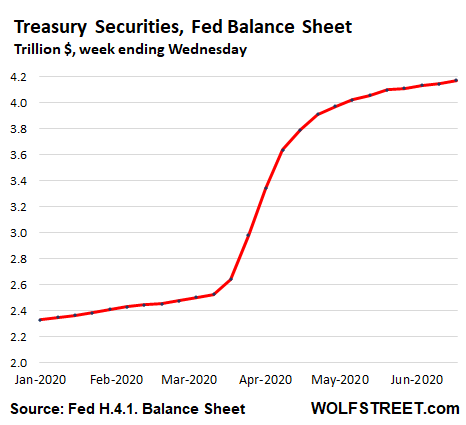 The Fed has cut its purchases of government-backed mortgage-backed securities (“Agency MBS”) after the initial burst. But its MBS trades take one to three months to settle, and the Fed books them after they settle, which creates an erratic pattern. So what we’re seeing today are settled trades from some time ago.

The balance of MBS rose by $83 billion to $1.92 trillion. This includes Agency Commercial Mortgage Backed Securities that the Fed started buying as part of its bailout program. But the balance of these CMBS has remained flat over the past three weeks at $9.1 billion. 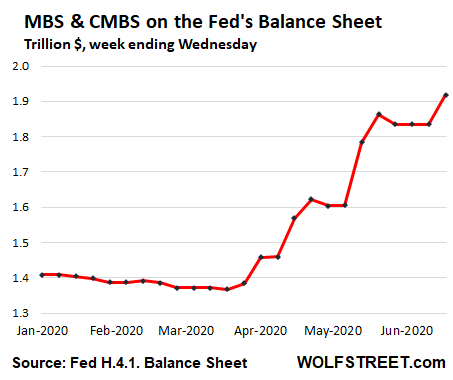 For the stock market, a new phase has started. It now has to figure out how to stand on its own swollen and inflated legs in the worst economy in a lifetime, with the worst corporate earnings reports coming its way, while stock prices are ludicrously inflated. So good luck.

No “V-shaped recovery back to normal.” Read… Update on the WTF Collapse of Demand for Gasoline, Jet Fuel, and Diesel