The unemployment crisis – by far the worst since this type of data has been tracked – stopped getting worse in May and has lessened for the third week in a row, but lessened at snail’s pace, and it’s still so enormous that the improvements are relatively tiny.

Under all state and federal unemployment insurance programs combined, including the federal Pandemic Unemployment Assistance (PUA) for gig workers, a total of 29.2 million people (not seasonally adjusted) are still claiming unemployment insurance, the Department of Labor reported this morning. This is down from 29.5 million last week, and from 30.2 million the week before. The chart below shows in blue the number of people receiving unemployment benefits under state programs, and in red the number of people receiving federal benefits, mostly gig workers: 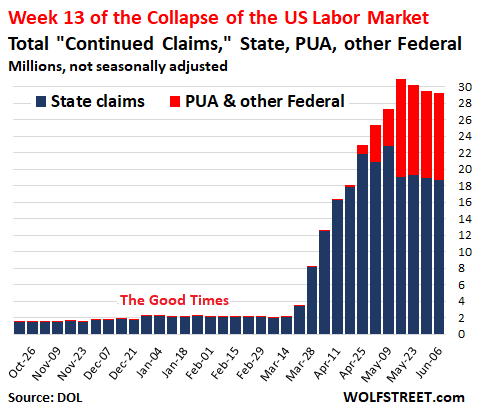 A few weeks ago, I switched to reporting only not-seasonally adjusted data for unemployment claims because the seasonal adjustments were not designed for a crisis of this magnitude, and the results went haywire.

The flood of initial unemployment claims under state programs continues: 1.43 million initial claims (not seasonally adjusted) were processed in the week ended June 13, down from 1.54 million a week ago. While down a whole bunch from this tsunami in late March, this is still more than double the records of the prior unemployment crises in 1982 and 2009. 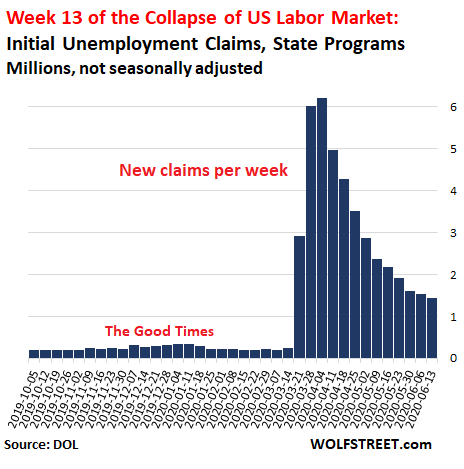 In other words, people who qualify for state unemployment benefits – regular employees as opposed to gig workers – are still getting laid off in very large numbers. There are bits and pieces of evidence emerging that a larger portion of those layoffs are now from companies that were not part of the initial shutdowns of restaurants, bars, retailers, hotels, and other businesses, but from higher-paying jobs across industries.

The number of people who continue to claim unemployment benefits a week or more after their initial claim under state programs become part of the “insured unemployed.” This number of people with “continued claims” under state programs declined to 18.65 million in the current week, from 18.92 million in the prior week (the blue segments of the columns in the first chart above).

In other words, more people got hired back or found another job – including at retailers, restaurants, dental practices, etc., that have reopened – than were added to the state unemployment rolls.

Pandemic Unemployment Assistance: Gig workers are now covered under the federal PUA program, which is administered by state unemployment offices. In total, 760,526 initial PUA claims were processed in the week ending June 13.

And 9.28 million gig workers receive PUA benefits, down from 9.73 million in the prior week. In other words, here too, more gig workers started working again, and their number was larger than the number of gig workers who lost their work and filed unemployment claims.

These out-of-work gig workers account for about one-third of all insured unemployed. The PUA claims system now demonstrates for the first time just how exposed gig workers are, and how many of them lose their work in a crisis.

Pandemic Emergency Unemployment Compensation. Continued claims under the federal PEUC program more than doubled during the week to 1.08 million.

Some states still behind in processing claims

The PUA program for gig workers was difficult to implement for states. Some scrambled to get it done, others still haven’t gotten it done. But every week, more states start processing these claims. As of today’s report, six states still have not processed any claims by gig workers under the PUA program, including the biggie, Florida:

There continue to be reports that some states are still having trouble catching up with the tsunami of state unemployment claims, and that many laid-off workers were still not able to file their UI claim.

What does all this mean?

I’m now fairly sure that the unemployment crisis bottomed out in May. A large number of people are still losing their jobs, and now an increasing number of those lost jobs are higher-paying jobs. But other people are finding new jobs or are being called back. And the people who start working again in a particular week now outnumber the people who lost their jobs in that week.

Beyond the official Data Chaos: “over 30 million people” lost their jobs and remain unemployed. The two US agencies that are reporting unemployment data – every Thursday, the Department of Labor with its claims for unemployment insurance; and at the beginning of every month, the Bureau of Labor Statistics with its survey-based jobs report – disagree widely on the unemployment numbers: a difference between these two agencies of about 9 million unemployed, as I pointed out last week. The BLS has gone off the deep end for systematic reasons and officially admits to at least part of its errors.

79 comments for “Week 13 of the U.S. Labor Market Collapse: Week 3 of Recovery at Snail’s Pace Amid Data Chaos”

Dotcom Bust 2 has begun. Only bigger.