No “V-shaped recovery back to normal.”

Demand for gasoline collapsed in a stunning and historic manner, starting in mid-March when the measures to slow down the spread of the pandemic took effect, when working from home became the new thing, and when millions of people lost their jobs on a weekly basis and stopped driving to work. Gasoline consumption, after bottoming out in the week ended April 3 with a year-over-year plunge of -48%, to 6.7 million barrels per day, the lowest in the EIA’s data going back to 1991, the great recovery began – and fizzled.

Gasoline consumption in the week ended June 12, at 7.87 million barrels per day, was still down 20.7% year-over-year, according to data reported by the EIA today. It has been about the same 20% year-over-year decline four weeks in a row: 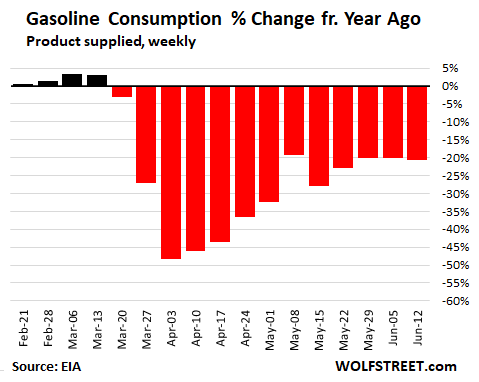 The EIA measures weekly consumption in terms of product supplied, such as by refineries and blenders, and not by retail sales at gas stations. 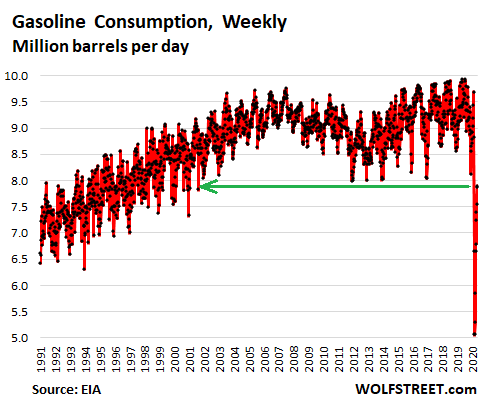 Gasoline hasn’t been exactly a booming business since around 2005. The decline in consumption during the Great Recession was followed by a recovery and finally new records starting in 2016. In other words, no growth for a decade.

Consumption of jet fuel (kerosene type) in the US – based on jet fuel supplied, the EIA’s proxy for consumption – began to get hit in February as flights from the US to China were being cancelled. In April and May, demand for jet fuel collapsed by as much as 80% year-over-year in the two worst weeks. And in the week ended June 12, according to data released today by the EIA, consumption of jet fuel, was still down 53% from a year ago: 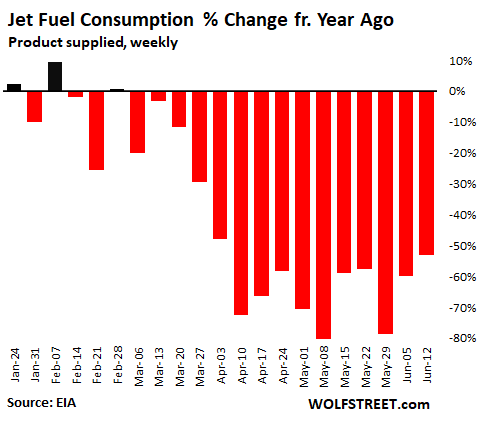 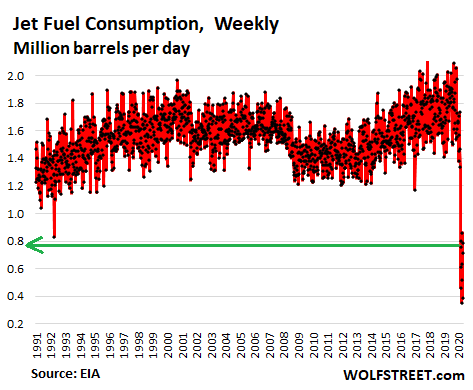 Distillate includes diesel fuels used by trucks and some cars, railroad engines, agricultural implements, diesel generators, and the like. It also includes fuel oils, such as for space heating and power generation, where demand is very seasonal, with spikes during heating season. So this is volatile and impacted by the weather. Nevertheless, trucking and railroads have been in a sharp decline for over a year, and this shows up in the consumption of distillate.

In the week ended June 12, distillate consumption was down 12.2% from last year. It has been down for most of this year so far, but the year-over-year declines steepened in April and May. The decline, maxing out at -25%, however is pale compared to -48% during the worst week for gasoline and -80% during the worst two weeks for jet fuel. 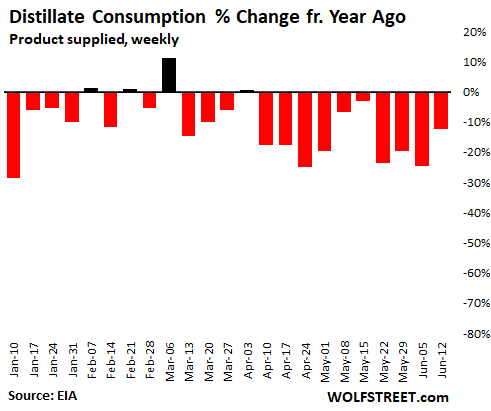 At 3.55 million b/d in the week ended June 12, distillate consumption remains were it had been over two decades ago: 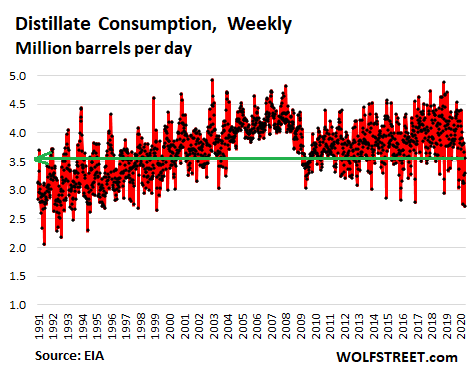 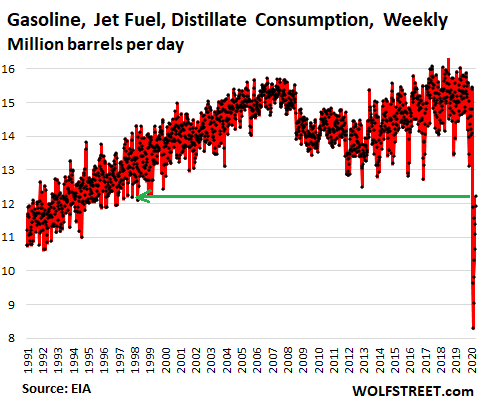 This is the scenario that the US oil industry is facing: An unprecedented plunge in consumption that even in mid-June remains 22% below last year – a plunge that, while not as bad as it was in April, seemed unthinkable just a few months ago.

Consumption will gradually increase from here. But looking at what happened during and after the Great Recession, it will likely take years for demand to recover, even after the 30 million or so people who’ve lost their jobs are working and commuting again.

And there is a good chance combined consumption will not recover fully to its prior peak levels for a number of reasons.

All automakers are switching part of their production to EVs. Over the next few years, EVs will play an ever-larger role in the national fleet and will eventually put a visible dent in gasoline consumption, and oil companies are concerned about that, because no one wants to be in a business that faces long-term structural decline.

At the same time, working-from-home at least part of the time will be the new model for many workers. And in terms of jet fuel, teleconferencing is taking the place of a good number of business trips, and the fact that this works just fine and saves a lot of time and money is now being proven on a daily basis.

This is one more way in which this crisis will leave its long-term imprint on the economy. And the old normal is gone for good.

It’s going to be a tough slog forward. Read… This Better Be the Bottom for the Goods-Based Sector in the US

121 comments for “Update on the WTF Collapse of Demand for Gasoline, Jet Fuel, and Diesel”