It’s going to be a tough slog forward.

There had been hopes that April was the bottom for the goods-based sector. And that May would be the bounce, the beginning of the V-shaped recovery. In retail land, there was a bounce in May as consumers started spending their stimulus money, sending ecommerce skyrocketing, and triggering a big bounce from abysmal lows in some other retail segments. But that has not been the case in the rest of the goods-based sectors, such as manufacturing, oil-and-gas production, construction, and others. Just this morning, the Census Bureau reported that housing starts in May were down 23% from May last year.

These goods-based sectors need and produce goods of all kinds, and shipment volume tracks them. Alas, shipment volume by truck, rail, and air in the US plunged by 23.6% in May compared to May 2019, and by 28% compared to May 2018, according to the Cass Freight Index for Shipments. The year-over-year plunges in May and April were the steepest since January 2009 and April 2009, which had been the steepest in the data series going back to 1990: 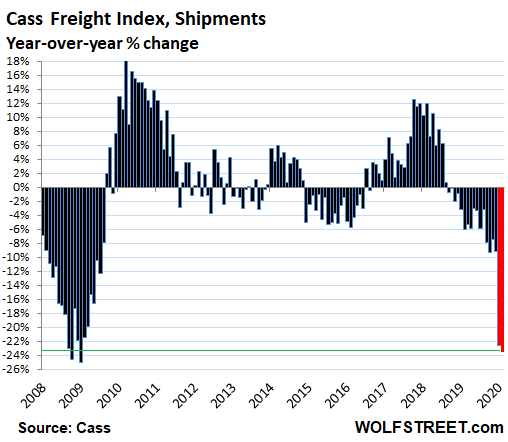 The Freight Recession started long before the pandemic – May was the 18th month in a row of year-over-year declines. But the magnitude has changed. When in April shipment volume had plunged 22.7%, it was hoped that this would be the bottom, but it has now turned out to have been a false bottom.

“We are now close to 80% through the second quarter of 2020, and we see volumes down double-digits for most carriers across most modes in the U.S., including truckload, LTL, intermodal, and rail,” Cass said in the report.

“Ecommerce (including parcel and big and bulky last mile) remains a hot area, as long-term trends in consumer buying patterns were accelerated in recent months. Customer exposure is also the biggest differentiator in terms of carrier to carrier performance,” Cass said.

This is the split in the transportation sector: everything having to do with ecommerce is hot, and the transportation business that is part of the ecommerce supply chain – including Amazon’s own delivery network, FedEx, UPS, the USPS, and others – are struggling to keep up with consumer demand for parcel shipments and last-mile delivery.

The supply chains and transportation services for supermarkets and grocery stores of all kinds are also pressured by consumer demand as consumption has shifted from offices, hotels, restaurants, etc. to the household.

But the vast number of business-to-business shipments – including the entire industrial sector – have dropped.

The stacked chart below shows the seasonality of the transportation business. Each line represents a year. The top black line represents the banner-year 2018 when companies were front-running the potential tariffs. This boom ended in late 2018. By December 2018, shipment volume was already down year-over-year. And 2019 (green line) continued to deteriorate.

This year (red line) started out way below 2019, and when the measures to contain the pandemic hit in April, shipment volume plunged. The slight uptick in May was less than the normal seasonal uptick, and compared to May 2019 and May 2018, this May fell further behind. Both April and May were the lowest readings since 2009 (brown line): 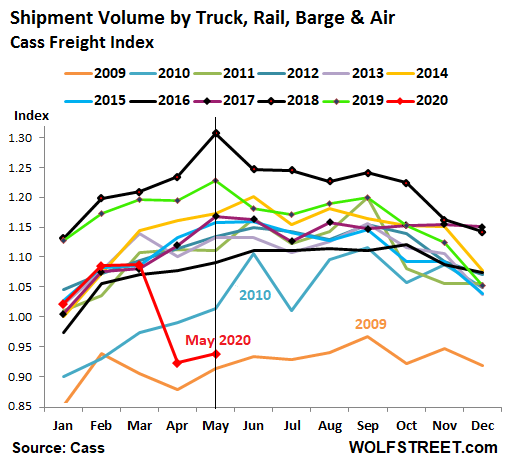 The Cass Freight Index tracks the shipment volume of products for consumers and industrial users, by all modes of transportation, but is more concentrated on trucking. Bulk commodities, such as grains, coal, or petroleum products, are excluded from the index.

Rail traffic: also hoping May was the bottom

Rail traffic in May plunged 20.2% year-over-year, after having plunged 21.2% in April, according to the Association of American Railroads – with carloads down 27.7%, the worst decline in the data going back to 1989, and container and trailer loads (“intermodal”) down 13%.

But May might have finally been the bottom for railroad traffic. During the last week of May, rail traffic plunged “only” 17.3% year-over-year, with carloads down 24.2% and intermodal down 10.6%.

“It is somewhat heartening to note that 11 of the 20 carload categories, including several major commodity areas, improved their showing versus 2019 when comparing their current loading rates to those we have seen the last four weeks,” the AAR report said.

“Perhaps most notably, automobile loadings improved to about one-third the normal level as assembly plants began the intricate process of reopening. While this is still a long way from where we would like to be, it is far better than the ten percent of norm of only two weeks ago.”

This is what it has come down to: “…improved to about one-third the normal level.” Meaning down only 67%. It’s a start. The week in mid-May, they’d collapsed by 90%. For all of May, carloads of motor vehicles and parts were down by 75%.

The amount of money spent by shippers, such as industrial companies or retailers, plunged by 21.2% in May year-over-year, the steepest drop since 2009, after having dropped 18.2% in April, according to the Cass Freight Index for Expenditures. This is a function of both, shipment volume (which had plunged) and freight rates (with some rates up, such as air freight and rates for ecommerce shipments, and other rates down, such as mileage rates in trucking). And the decline in expenditures from April to May came despite the usual seasonal increases during that period: 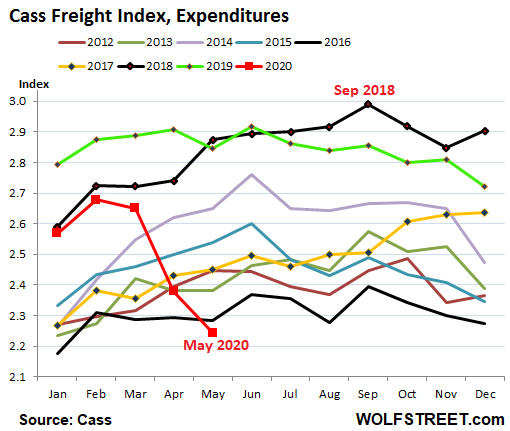 There too is hope that somewhere in May was the bottom finally, and average rates have ticked up in recent weeks – even if it’s just due to seasonality.

“By and large, spring was not kind to carriers, so the higher rates we’ve been seeing in recent weeks are a welcome sign for trucking companies,” says Matt Sullivan, editor of DAT Carrier News, in a blog post. “If nothing else, this typical seasonal trend provides at least some piece of normality in what have otherwise been turbulent times for truckers.”

So perhaps, May was finally the bottom for the goods-based sector. Factories are reopening. But oil-and-gas production – a huge industry with a large impact on manufacturing, transportation, construction, technology, commercial real estate, and others – remains in a depression. Over 30 million consumers have lost their jobs, and that has hit consumer spending, but the hit is now being softened by spending the stimulus checks and the additional federal unemployment compensation of $600 a week. But the stimulus check was a one-time affair, and the additional $600 a week will expire at the end of July. And it’s going to be a tough slog forward.

The asset class of vintage cars has been having a hard time, with the most sought-after Ferraris at the top of the list. For example, the price of a 1958 Ferrari 250 GT California Spyder LWB is down by 29%. But “Affordable Classics” sizzle. Here are the cars and indices. Read…  Asset Class of Classic Cars Sinks, High-End Hits 5-Year Low, Priciest Ferraris Drop the Most. American Muscle Cars Fall to 2007 Level