It’s a pandemic, so there are problems with the data.

Total retail sales in May bounced off 17.7% from the April low, according to the Census Bureau today. April had been the lowest April since 2013. May retail sales, at $485 billion seasonally adjusted, were down 6.1% from May 2019, down 3.3% from May 2018, and up 2.6% from May 2017. It seems, people are spending their stimulus checks and their extra $600 a week in federal unemployment compensation.

Ecommerce sales skyrocketed 30% year-over-year to another record. Sales at building materials, garden supply, and equipment stores jumped to a new record. Other segments bounced off strongly, but remained at low levels. Two segments that had spiked in March – grocery and general merchandise stores – fell halfway back to earth in April, and stayed there in May. Department stores and clothing & accessory stores, though they too bounced, remained at horribly depressed levels that, other than April, were multi-decade lows. There is no good news for malls. We’ll get into each of those segments: 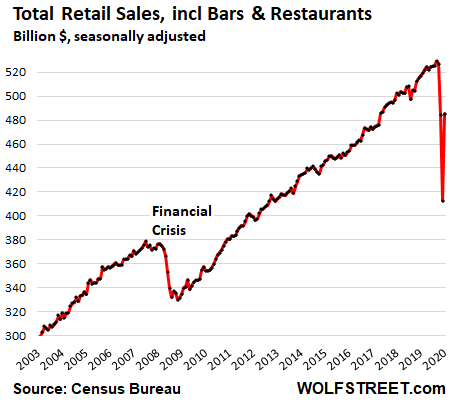 The Census Bureau acknowledged, as it had done in April, that due to the pandemic, it changed its data collection procedures. This data is based on surveys sent to 5,500 randomly selected retail and food services locations, of the over three million such locations in the US. Normally, data are collected “on paper, online, fax, and through telephone interviews.” But due to the pandemic, it was collected “primarily via email requests and online reporting, supplemented by calling operations.” In addition, the Census Bureau said it altered the method of seasonal adjustments.

The same issues dogged the surveys in April. And so, as part of its data release today, the Census Bureau revised its April data. Revisions are normal. But some of the revisions for April were huge, up and down. The list below shows the percentage differences between the April dollar sales levels of the “advance estimate” released a month ago, and the revised data:

A month from now, we might also see these types of mindbogglingly large revisions of today’s retail sales for May.

The segments that spiked to new records

Sales at non-store retailers continued to spike from record to record. This category overlaps partially with ecommerce but also includes other types of retailers such as catalogue and mail-order operations, door-to-door sales, sales at temporary stalls and at vending machines. Fired up by the relentless boom in ecommerce, sales jumped 9% in May from April, and by 31% from May last year, to $86 billion: 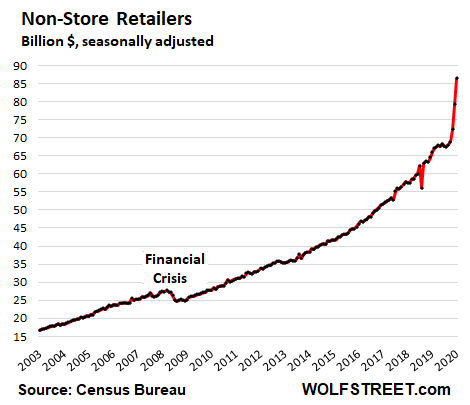 Sales at building materials, garden supply and equipment stores (such as hardware stores and big-box stores like Home Depot) spiked 16.4% in May from April, and by 10.9% year-over-year, to $36 billion, a new record — which makes sense: people stuck at home with time and money, including stimulus money, fixing up their homes and building sheds in their backyards: 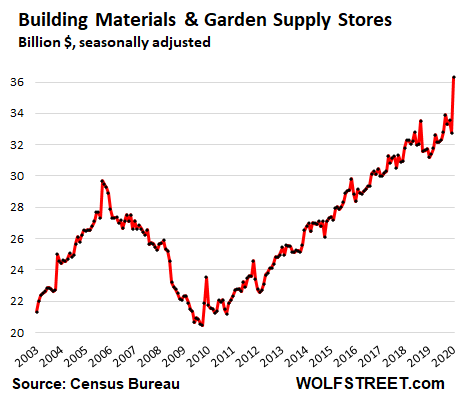 The other extreme: where sales remain abysmal.

Sales at department stores – not counting the online sales of department stores – had totally collapsed in March and April. In May they bounced but remained 26% below May last year. Department store sales have been declining since their peak in 2001. Countless chains have filed for bankruptcy over the years. Most were liquidated. Over the past two months, Neiman Marcus and JCPenney joined the bankruptcy club. Lord & Taylor is planning to. Year after year, surviving department stores have announced waves of store closings.

They were structurally being obviated. From the peak in 2001 through February 2020, monthly sales collapsed from $20 billion to $11 billion, despite inflation and population growth. In April sales collapsed to $6 billion. In May, sales bounced to $8.5 billion – a previously unimaginably low level, and still down 26% from the already depressed levels in May last year: 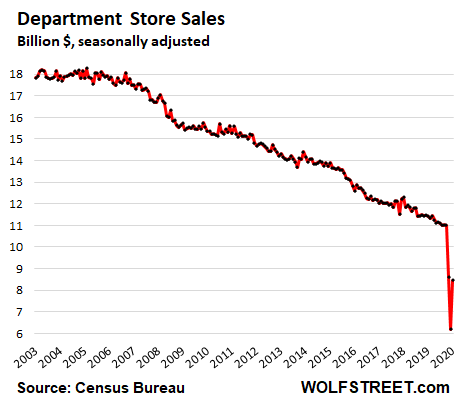 Last week, Macy’s CEO Jeff Gennette said that sales at stores that had been reopened for at least one week were about half of where they’d been before the pandemic. And before the pandemic, Macy’s – which invested massively into its booming ecommerce business – had been closing stores for years because their sales were already evaporating.

Sales at clothing & accessory stores, after stagnating for years, plunged to near-zero in April. In May, there was a bounce, but off near-zero, and sales, at $8.1 billion, remained abysmally low, being down 63% year-over-year: 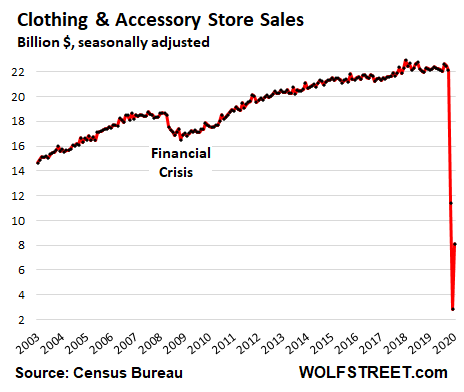 Sales at Restaurants & Bars bounced off the catastrophically low levels of April, as many restaurants have reopened, but sales remained down 39% year-over-year: 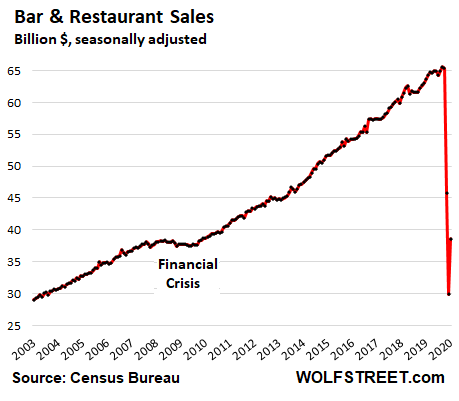 Sales at grocery stores and beverage stores – which had spiked in March, driven by panic buying and a shift in consumption from restaurants, offices, and hotels to households – gave up a big part of that spike in April and remained roughly at that level in May. Year-over-year, sales are still up 14.5%, a huge gain for the grocery and beverage business, which is otherwise noted for slow growth based on population growth and price increases: 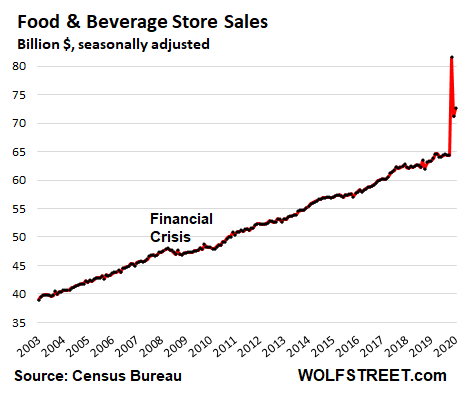 Sales at general merchandise stores without department stores had spiked in March and then gave up that spike in April. In May, sales ticked up 2% from April and were up 6.1% from a year ago. Walmart and Costco are in this segment. But April sales were revised up by 11.7% in this data set (see above list). So hard to tell what’s really going on: 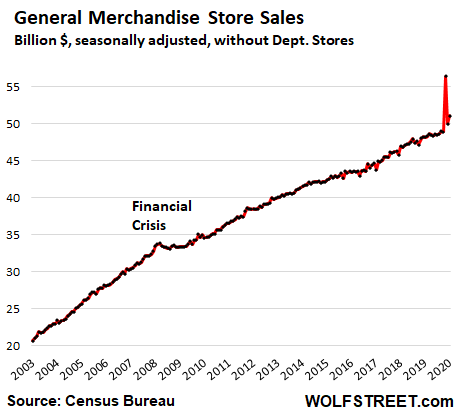 Sales at sporting goods, hobby, book and music stores, which had collapsed by 45% over March and April, bounced right back in May, plus some. At $6.9 billion, sales were up 4.9% from May last year. There have been numerous anecdotal reports on the booming business at bike shops and about people, locked out from their gyms, buying stuff to exercise at home or outside. And it all makes sense – but the dollar amounts are small: 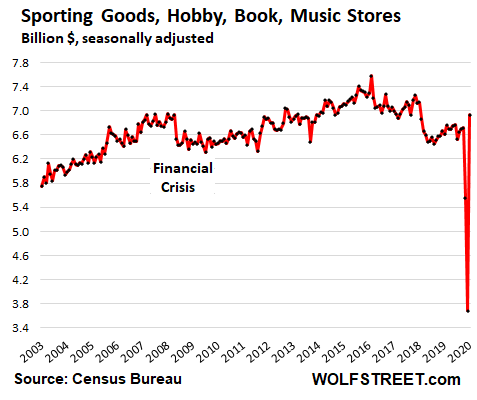 But this is where my sampling-error alarm went off.

Sales at motor vehicle & parts dealers – which includes sales of new and used vehicles plus parts sales – bounced off sharply and made up almost all of the lost territory, down only 3.9% year-over-year. And this is the biggie, the single largest retail segment, with $98 billion in sales in May, accounting for about 20% of total retail sales. But this is where my sampling-error alarm went off…. 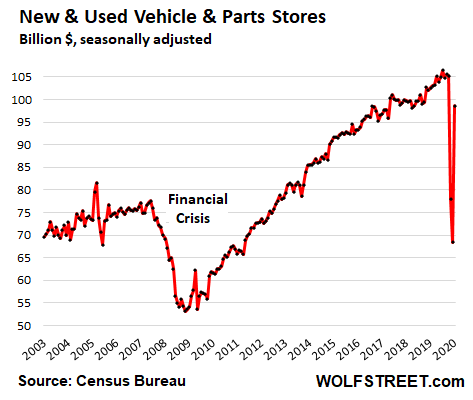 The automotive industry, including Cox Automotive, estimated that new-vehicle sales in May dropped 16% year-over-year (units not dollars) and that used-vehicle sales dropped 20%. These industry data collectors have broad data available that are submitted by dealers and automakers and tend to be fairly accurate.

Sales at furniture and home furnishing stores bounced back sharply in May to $7.7 billion, but remained at very depressed levels and 21.5% below May last year. This is the category whose April sales were revised up by 23.3%, which is a huge revision (see list at the top). So we take all this with a grain of salt: 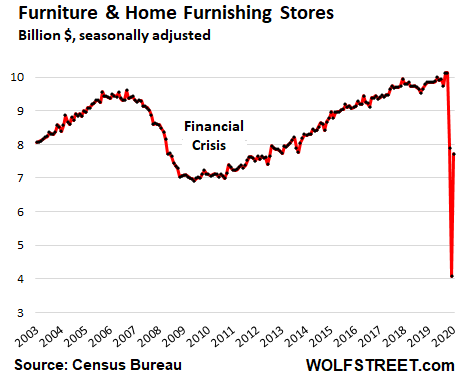 Sales at gas stations – which includes the other stuff people buy at gas stations – also ticked up too, but remained down 31% year-over-year. Gasoline sales in dollars are heavily influenced by the retail price of gasoline, which had collapsed in prior months and is now on the rise again: 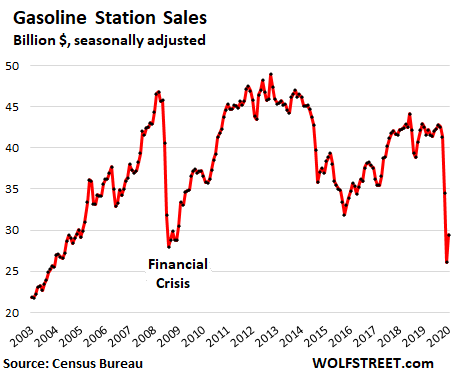 The winners in this crisis: Ecommerce – for retailers that don’t sell men’s office attire and formal wear – and for sure, lawyers. Read… An Epically Bad Week for US Brick-and-Mortar Retailers and Landlords