Foreign holders, US banks, and US government funds all dumped. But two big players gorged on it – and one of them was the Fed.

Foreign investors – including central banks, governments, companies, funds, and individuals – shed $44 billion of US Treasury securities in April, compared to March, according to the Treasury Department Monday afternoon. Over the same period, the mountain of US Treasury securities grew by $1.287 trillion. Someone must have bought this $1.287 trillion in additional US debt that was issued in April, plus the $44 billion that foreign holders dumped. This amounts to $1.33 trillion. But who bought it?

This unloading of US Treasury debt by foreign entities comes as the US government is borrowing vast amounts, at a rate of $1 trillion every four to six weeks. And some entity always has to buy this debt.

Yet, buying Treasury securities is an unpalatable undertaking today. The yield ranges from near-zero for short-term Treasury bills to 0.7% for a security with a remaining maturity of 10 years, and up to a whopping 1.45% for 30 years. Inflation will reduce the purchasing power of the principal by more than the interest paid. And yet, there is demand for them, or else the yields would spike as prices plunge. But who are the entities buying them?

These entities fall into five broad categories: Foreign holders; the Fed; the US government’s pension funds and Social Security Trust Fund; US commercial banks; and finally the motley collection of other US institutions such as bond funds, insurance companies, cash-rich corporations such as Apple, highly leveraged hedge funds with complex trades involving Treasuries, and individual investors needing to park some money. So here we go…

All foreign investors combined – “foreign official” holders such as central banks, and foreign private-sector investors – dumped $44 billion in US Treasury securities in April, which took their total holdings down to $6.77 trillion, according to the Treasury Department’s Treasury International Capital (TIC) data. And their share of the incredibly ballooning US Treasury debt ($24.97 trillion at the end of April) dropped to 27.1%, the lowest since March 2008.

The chart below shows foreign holdings in trillions (blue line, left scale) and as a percentage of total US debt (red line, right scale): 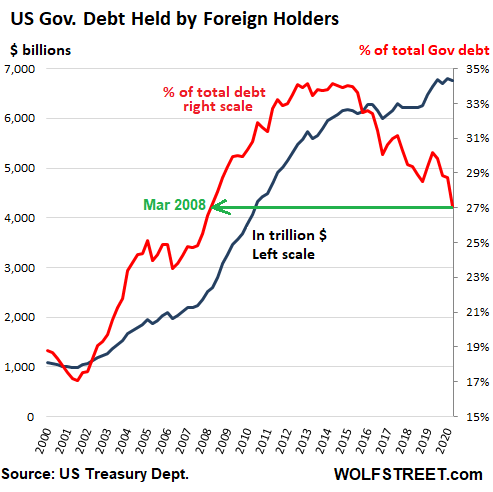 Japan and China are the two largest foreign creditors of the US. Since 2018, they have gone the opposite way, with Japan adding to its holdings, and with China continuing to shed its holdings. Japan’s holdings, after a massive buying spree early in the year, ticked down a smidgen in April.

China unloaded $19 billion in April, which brought it back to about its December level. In the chart below, if you ignore the plunge in China’s holdings during its period of capital flight from mid-2016 and the recovery through mid-2017, and you’ll get the green long-term trend line. So we can see where this is going. China held only 4.3% of total US debt, the lowest in years. Japan held 5.1%. 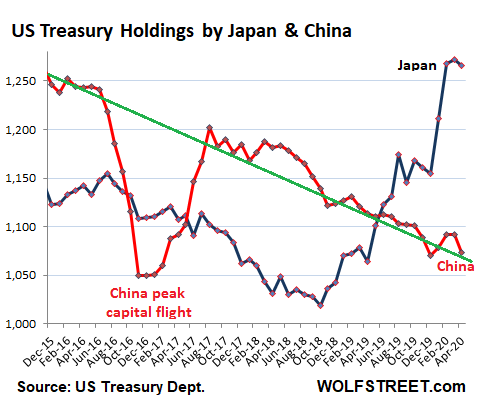 The next 10 major holders are mostly tax havens and financial centers, including the UK (City of London financial center), Belgium (home to Euroclear), and Ireland where many US corporations, including Apple, have mailbox entities where they register part of their global profits to dodge taxes in the US, which results in some of their US Treasury holdings being held in entities in Ireland. In parenthesis are their Treasury holdings as of April 2019:

Saudi Arabia has fallen off the list as it has dumped one-third of its holdings, slashing them from $184 billion in February to $125 billion in April.

US government funds – including the Social Security Trust Fund and pension funds for federal civilian employees and the military – dumped $91 billion in Treasuries in April, whittling down their total holdings to $5.9 trillion. Often called “debt held internally,” these are assets that belong to the beneficiaries of those funds.

US commercial banks dumped $51 billion in Treasuries in April, compared to March, which brought their total holdings down to $919 billion, according to the Federal Reserve’s data release on bank balance sheets. In other words, they hold about 3.7% of the total US debt.

Other US entities – institutional investors, bond funds, pension funds, insurers, highly leveraged hedge funds engaging in complex trades, private equity firms, plus cash-rich corporations, and individuals directly or indirectly – gorged on US Treasuries, some of them likely in panic mode. They loaded up with an additional $948 billion in April and brought their total holdings to $7.24 trillion, which makes them the largest holder of US Treasury securities.

In summary, in April:

In the chart below, which shows Treasury holdings by category, the holdings of US banks and other US entities are combined into the yellow field: 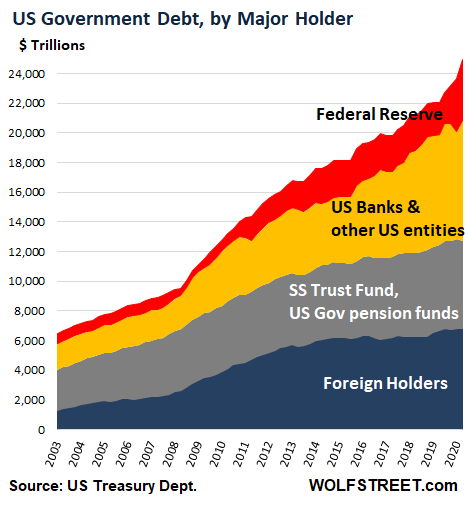 But the pileup of the US national debt continues. It spiked by $1 trillion in 5 weeks to now over $26 trillion. And business debts spike to high heaven. Read…  Wow, That Was Fast: Debt Out the Wazoo

132 comments for “But Who Bought this Huge Pile of US Government Debt?”