Sales of existing homes (closed transactions of single-family houses, townhomes, condos, and co-ops) plunged 29% in May compared to May last year, not seasonally adjusted, to 340,000 homes, according to the National Association of Realtors. The “seasonally adjusted annual rate of sales” (SAAR) – which is generally used as the headline number – plunged 26.6% year-over-year to 3.91 million, the lowest rate of sales since the depth of the Housing Bust in October 2010 (data via YCharts): 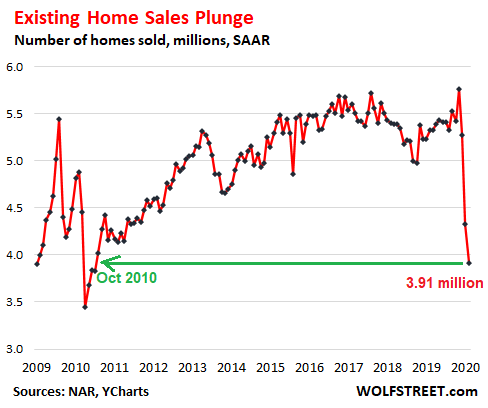 The 26.6% year-over-year plunge in the seasonally adjusted annual rate of sales was the biggest since February 2008, a sign of just how tough the real estate businesses has become (data via YCharts): 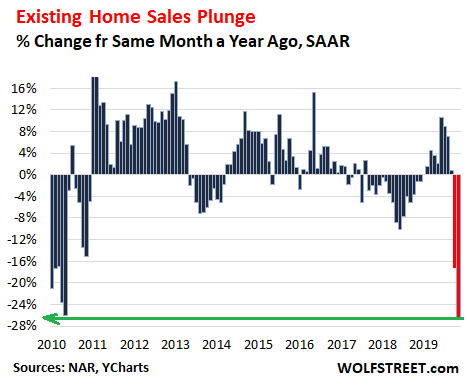 Condo and co-ops sales were hit much harder than house sales – but both were ugly:

The “big move to the suburbs?”

Closed sales in May largely reflect contracts signed in March and April. So it’s a little quick to come to a conclusion as to why condo and co-op sales are collapsing like this, while house sales are only plunging.

The report – and the industry overall – points at pandemic-induced moves from multi-family buildings in big cities, such as condo towers with elevators, to houses in the suburbs, with commutes being made less arduous by work-from-home arrangements.

This would be a great trend because big cities are awfully congested, and these condos are awfully overpriced. But I’m not sure….  House sales still plunged, rather than increased, as a shift from condos to houses might imply.

And a lot of condos have been bought by investors, many of them residing in other countries. Investors’ reasons for buying a condo vary, ranging from basic capital flight and money laundering to renting the unit out, either as regular rental or as vacation rental. But finding new investors in condos in this environment has become tough.

So we will see down the road if a “move to the suburbs” is one of the permanent changes that the pandemic has initiated. The NAR in its report is in that camp:

“Relatively better performance of single-family homes in relation to multifamily condominium properties clearly suggest migration from the city centers to the suburbs.”

“After witnessing several consecutive years of urban revival, the new trend looks to be in the suburbs as more companies allow greater flexibility to work from home.”

Sales in May fell in all regions, compared to May last year:

Median price drops from April to May for first time ever in the data.

The NAR report didn’t mention this because it was very inconvenient. The Median price dropped from April to May. 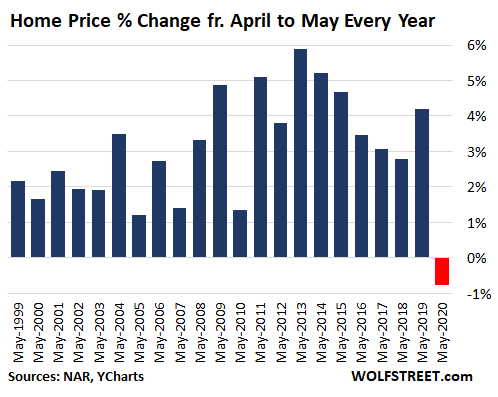 This wacko April-to-May price decline chopped the much-ballyhooed (and pooh-poohed) year-over-year price gain in April of 7.4% to just 2.3% in May.

Unsold inventory of homes that are still for sale and haven’t been pulled off the market yet has increased in May by 6.2% from April to 1.55 million homes.

While still down 18.8% from May last year – as sellers were still worried about potentially contagious people running through the homes – sales have plunged a lot more (-26.6% SAAR), so unsold homes for sale rose to 4.8 months’ supply, the highest supply since July 2016 (data via YCharts): 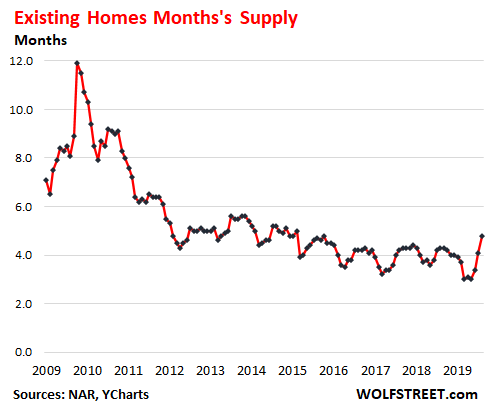 Clearly, the housing market is in the first moments of struggling with the economic consequences of the pandemic. Housing markets move slowly. Things don’t happen overnight. Sales take a month or two to close. Everything takes time and data always lags. And markets are very local, each with very different dynamics.

And this time around, there is an additional wrinkle: Millions of homeowners, rather than defaulting on their mortgages, with 30 million people now on unemployment rolls, have entered into forbearance agreements with their lenders, where the lender agrees to not pursue its legal rights against the homeowner for non-payments. This too is going to be a mess for people who still haven’t found a job when the forbearance agreements expire. The market hasn’t even begun to wade into this mess.