The Fed has been cutting back for weeks on its asset purchases, and on its last weekly balance sheet, its total assets actually fell by $74 billion. Now Bank of England Governor Andrew Bailey published a piece on Bloomberg Opinion today in which he wrote that these massive central-bank balance sheets – he was talking in global terms – “mustn’t become a permanent feature.”

“As economies recover, it’s likely that some of the exceptional monetary stimulus will need to be withdrawn,” he said. And this shedding of part of the bonds that had been purchased would happen before the central bank raises interest rates, he said.

This is the opposite of how the Fed did it last time: It started raising rates in December 2015 and started shedding Treasury securities and MBS in October 2017.

This time, the Fed front-loaded $2.8 trillion in QE and has already started shedding some of it even as FOMC members don’t see interest rate hikes through 2022. This is a big shift, of reducing the balance sheet first, and then raising rates.

And he is saying that the BOE’s balance sheet isn’t going to stay this massive for long and that it will undo some of the accommodation as the economy figures out where the new normal is.

The Fed is leading. The BOE is publishing the reasoning for other central banks to do the same.

Bailey started out doing the same thing that Fed chair Jerome Powell has been doing for weeks: patting central banks on the back for the massive money-printing binge that was designed from get-go to make sure asset holders wouldn’t have any skin in the crisis, that they’d get bailed out lock, stock, and barrel. Bailey emphasized how important it is for central banks to act independently and freely to bail out whoever they want to.

Central banks have “made big decisions and implemented them rapidly in the face of an unparalleled crisis, coordinating with governments to maximize policy effectiveness,” he wrote. “This capacity to act must be reinforced and not mistakenly called into question.”

Yup, don’t even think about reining in central banks. And suddenly he pulls the rug out from under any hopes for QE infinity.

“But the financial system mustn’t become reliant on these extraordinary levels of reserves,” he said.

Asset purchases of all types – such as the Fed’s buying Treasury securities, MBS, corporate bonds, junk bonds, and the like – end up in a huge pile of assets on the Fed’s balance sheet, and they also engender a huge of pile of “reserves,” which is cash that the banks have put on deposit at the central bank, and that the central bank carries as a liability.

For the Fed, “excess reserves” have surged during QE-1, QE-2, and QE-3. Then they began to unwind through mid-2019. This includes the period during which the Fed began shedding assets. During the repo market bailout starting in mid-September 2019, these reserves rose again – and that was one of the stated solutions to the repo market issues. When the repo market bailout ended on January 1, 2020, reserves flattened. Then in mid-March, the Fed unleashed the money-printer’s fury, and reserves skyrocketed: 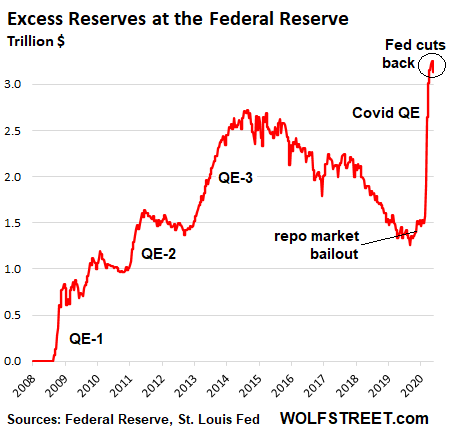 These reserves held at the central bank, that resulted during the asset-buying binge, “are the ultimate liquid assets,” Bailey wrote.

“But the role of central bank reserves shouldn’t always be taken for granted,” he said.

“Rather than having to keep relying on central bank support for all aspects of the financial system, we need a robust assessment of the latter’s weaknesses,” he said. “The role of money market funds, and the risks to financial markets that they posed at the height of the disorder, is one area to examine.”

“As economies recover, it’s likely that some of the exceptional monetary stimulus will need to be withdrawn, including by reducing reserves,” he said.

But there are limits as to how far the balance sheet could be trimmed. “This wouldn’t take us back to the very low levels of reserves before the financial crisis, which sometimes failed to recognize the role they play in ensuring the stability of the financial system.”

Central-bank balance sheets need to be trimmed down because “elevated balance sheets could limit the room for maneuver in future emergencies,” he said.

And the big shift: Reduce the balance sheet first, before raising interest rates – which is the opposite of what the Fed did last time. Now, according Bailey, the BOE at least would do it in the opposite direction:

“When the time comes to withdraw monetary stimulus, in my opinion it may be better to consider adjusting the level of reserves first without waiting to raise interest rates on a sustained basis,” he said.

And the fact that he didn’t even mention negative interest rates indicates that the BOE is not seriously weighing them, after the Fed has already taken them off the table.