It’s not often that “zero” is used in official statistics that are normally counted in millions of people and billions of euros.

In April, for the first time since records began, no — meaning officially  “zero” — foreign tourists arrived in Spain, and foreign tourists spent “zero” in Spain, the world’s second most visited country in 2019, as its borders were essentially closed to foreign visitors for the duration of the month, according to new figures published by the country’s Institute of National Statistics (INE). Here are the first three (slightly truncated) paragraphs of the accompanying press release (translated by yours truly):

The State of Alarm brought into force on March 14 to manage the health care crisis caused by Covid-19 together with two later provisions… de facto suppressed the flow of international visitors to Spain for tourism reasons across all of the different access routes considered in the FRONTUR and EGATUR surveys, including roads, ports, airports and railway lines.

Some exceptions were made to the provisions, as was the case with citizens of Spanish nationality residing in other countries who were allowed to return to Spanish territory after the State of Alarm came into effect, as well as other travelers with justifiable cause who may in some cases be considered visitors. However, given the markedly reduced volume of these flows and the impossibility of accurately determining their underlying motive (it is hardly likely, given the circumstances, that the reason for their travel is tourism) we advise against accounting thereof…

In other words, Spain’s National Statistics Office doesn’t see any point in even entertaining the idea that foreign visitors might have visited the country for tourism reasons in April, given that the borders were effectively sealed shut, most planes had been grounded, trains were not moving, checkpoints had been erected on all major roads, and all hotels, bars, restaurants, museums, galleries and gift shops were shut for the entirety of the month. Even visiting the beach was banned. So, too, was taking a walk with somebody else.

Only the most ardent, pigheaded clandestine tourist would want to visit the country in such circumstances. One can’t help imagining tiny pockets of guiris locos, suitcases in tow, searching for a chink in Spain’s fortress borders or disguising themselves as doctors, nurses or important scientists to get through security at the airport. But their number was so low, assuming they even existed, that Spain’s National Statistics Office, many of whose employees will have been working from home during the lockdown, decided it wasn’t worth counting them.

And this is what the official data of international tourist arrivals shows. During the seasonal peaks in July and August, around 10 million tourists arrive per month. The seasonal troughs are clustered around December and January with around 4 million arrivals per month. The prior Aprils in recent years were situated in the 7-million range. And in April 2020, they collapsed to zero: 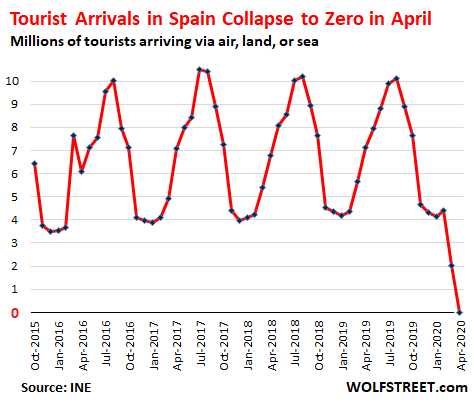 For Spain’s vital tourism industry, which generates approximately €180 billion a year — close to 15% of GDP — April is normally a month of transition. It is when business begins picking up again after the relatively quiet months of winter, with around seven million people visiting the country in recent years in April. Last year, 7 million tourists spent €7 billion ($7.9 billion). This is money that was appreciated but all the same taken for granted by thousands of tourism-related business, large and small, every year until this year, when it completely vanished.

May is unlikely to be much better than April. And June little better than May. Although bars and restaurants in all Spanish cities can now reopen their terraces to punters and hotels can also reopen their doors, albeit under strict conditions, for the moment they can only serve the local market since travel between provinces for reasons apart from business remains prohibited until June 21, when the so-called “state of alarm” is scheduled to be lifted.

While international travelers can now visit the country, assuming they can find a plane to board, they must self-quarantine for 14 days before being allowed to go about their business. If that business is essentially sightseeing, drinking in bars, eating in restaurants, visiting museums, sunbathing and the like, it’s an exorbitant price to pay and one most tourists are unwilling to accept.

That will all change on July 1, when Spain reopens its borders and scraps the mandatory quarantine policy. While surely residents of other European countries or further afield will come, there are doubts as to whether many millions of them — nearly 10 million did in July last year — will want to come, those than can even afford to. After all, fear of Covid is still rife and Spain was home to one of the worst outbreaks on the planet.

Denmark’s government has already ruled Spain out as an optimal tourist destination this summer. Danish citizens will only be allowed to freely visit Norway, Iceland or Germany and will be subject to a 14-day quarantine on their return if they venture elsewhere.

In France, the Minister of Ecological Transition and Inclusion, Élisabeth Borne, has urged her compatriots to shun Spain and vacation locally this year.

In the UK, which accounted for almost one out of every five tourists that visited Spain in 2019, travelers returning from abroad will have to self quarantine for 14 days from June 8 onward, though opposition to the policy is growing.

Even when air routes begin reopening and so-called “air bridges” are established with “low-risk” countries, many people may think twice before boarding a plane. According to the United Nations’ World Tourism Organization (UNWTO), international tourist arrivals are likely to plunge by 60% to 80% in 2020, depending on when restrictions are lifted. Some 100 million tourism jobs around the world are now at risk. Between $910 billion and $1.2 trillion of exports — tourism counts as an export — could be wiped out over the course of this year.

It is hoped that domestic demand will pick up some of the slack in Spain. And it probably will. But for countries like Spain that have grown massively dependent on foreign tourism, both for the jobs and revenues it provides, the fallout is likely to be brutal. By Nick Corbishley, for WOLF STREET.

Auto sales in the UK had already dropped three years in a row, before Covid. But after the lockdown, they collapsed to near-zero, and now the automakers’ finance companies are clamoring for a bailout. Read…  Automakers’ Finance Divisions Lobby BoE & UK Gov for Bailout. Auto Sales Collapse 97%, Consumers Apply for Payment Holiday