The delinquency rate for commercial mortgage-backed securities (CMBS) spiked from 2.29% in April to 7.15% in May by loan balance, according to Trepp today, which tracks securitized mortgages for institutional clients. This month-to-month spike of 481 basis points in the Trepp CMBS Delinquency Rate was the largest in Trepp’s data going back to 2009: 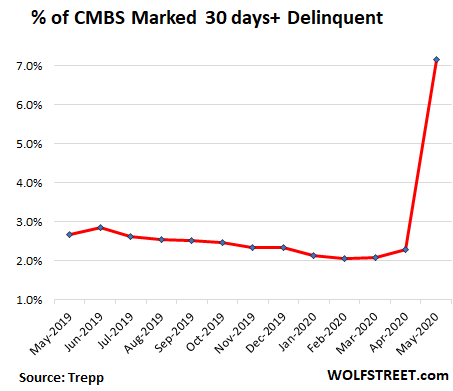 Lodging CMBS: The delinquency rate in May shot to 19.13% (from 2.71% in April). Many hotel properties are still closed and travel has essentially shut down. The sector remains in a death spiral.

How bad is it? In California, the state has made a deal with some hotel chains that would be otherwise shut down to house the homeless during the pandemic. It remains uncertain how well this plan is working, given the number of camps I still see on the sidewalk, but at least it’s some revenues for the hotels.

Multifamily CMBS: The delinquency rate rose to 3.25% in May from 1.92% in April, according to Trepp. Apartment buildings are under some pressure as some tenants are taking a rent holiday and as many areas have imposed eviction holidays. But at least for now, tenants are still mostly paying their rents, given that stimulus payments and state and federal unemployment benefits arrived in many households.

According to the National Multifamily Housing Council’s survey of 11.4 million professionally managed apartments across the US, 93.3% of apartment households made a full or partial rent payment by May 27 (though this was down from 94.8% at the same time last year).

“Each week we see new evidence that Americans are prioritizing rent and that the work apartment firms did to create flexible payment plans is paying dividends,” the NMHC’s report said.

Publicly traded apartment REITs show similar rent payment rates in their quarterly disclosures, tracked by S&P Global Market Intelligence, which today provided the latest updates on rent collection rates for April. The REITs in this table are “Multifamily,” except Invitation Homes, which rents out single-family houses:

Retail CMBS: The delinquency rate for retail properties shot to 10.14% in May from 3.67% in April, according to Trepp, as landlords are having the hardest time collecting rents. Many of them have offered their tenants, whose stores were or are still closed, some leeway, such as allowing them to defer rent payments for months.

How bad is it? Rent collection rates by publicly traded mall-REITs range from terrible to abysmal. Below are the updated rent collections, released today by S&P Global Market Intelligence. Simon Property Group [SPG], the largest of the mall REITs, does not disclose this rate and is not on the list. These rates reflect percentages of April rents that REITs reported to have collected by the week ended May 29:

And it’s getting ugly. For example, #3 on the list, CBL, which has over 100 malls in 26 states, many of them serving less affluent areas, said in an SEC filing today that it has “elected to not make the $11.8 million interest payment” due on June 1 on its 5.25% unsecured notes. If CBL doesn’t make the payment within the 30-day grace period, it will be in default. CBL’s shares are down to about 26 cents. This REIT is a goner.

Office CMBS: The delinquency rate for office properties ticked up to 2.4% in May, from 1.92% in April, according to Trepp,

Looking at office REITs, a more diverse picture emerges, with rent collection rates ranging from 83% to 98%, according to S&P Global Market Intelligence, with some landlords clearly having a hard time collecting rents, and others less so, at least for now:

CMBS delinquencies to set a new record in June?

The overall CMBS delinquency rate could have been worse for May and is likely to get worse for June, Trepp said.

A month ago, in its report for April, Trepp found that about 8% of the loans by loan balance missed their April payment. If 30 days later (at the end of May), all those loans would have been deemed 30 days delinquent, it would have pushed the overall delinquency rate for May to over 10%, “which would have threatened the all-time high recorded in 2012,” Trepp said.

But instead of 8%, only 4.98% were deemed 30 days delinquent. And this is somewhat in the eye of the beholder. Some loans remained in the “grace” period or in the “beyond grace” period, and were not considered delinquent, while others entered into forbearance agreements and thereby reverted to “current” without having made a payment.

But be patient, in terms of setting new records. June’s delinquencies are hanging out there. According to Trepp, about 7.6% of the loans missed their May payments but at the end of May were still less than 30 days delinquent. If they don’t revert to current via a forbearance agreement or a surprise payment, they’ll be 30 days delinquent at the end of June. And even if this happens to only part of those loans, a new record may well be set.

As far as CMBS is concerned, June is just the third month into this phase. In the wake of the Financial Crisis, the peak delinquency rate of Trepp’s index occurred four years after the Lehman shock. Now, three months into it, delinquencies are already gunning for a record.

Are the Work-from-Home-Folks Moving to Cheaper Pastures? Read… Rents in the Most Expensive Cities Drop. Oil Patch Gets Hit Too. But Massive Gains in Other Cities

87 comments for “CMBS Delinquency Rate Spikes by Most on Record”