Are the Work-from-Home-Folks Moving to Cheaper Pastures?

In the most expensive rental markets in the US, rents are declining, and did so even in May which normally is a fairly strong month for rents. And there may be some reasons. Zumper in its June rent report:

“It seems the pandemic has shifted the demand for apartments away from the most expensive cities, since usually demand picks up as we head into summer, but now the opposite is true. As more and more companies move into remote work, many renters don’t want to pay the big city price tag when they are unable to use the amenities and are looking for more affordable options outside of large, metropolitan areas.”

An anecdote in support of this theory fell into my lap the other day when I was talking with a guy from Google’s ad sales division who wanted to get me excited about spending money on Google ads. In the call, he said that he was working from home, like most Googlers, and that he’d moved from the San Francisco Bay Area back to St. Louis, now that he doesn’t need to be near the office in Redwood City. He wasn’t alone apparently, and landlords with vacancies are adjusting by cutting their asking rents.

In May, the median asking rent for a one-bedroom apartment in San Francisco dropped 2.6% from April, to $3,360, according to Zumper data. This produced a 9.2% drop from May last year, its largest year-over-year drop in the data that took it back the March 2017.

The data is collected by Zumper from over 1 million active listings, including Multiple Listings Service (MLS), of apartments-for-rent in apartment buildings, including new construction, in the 100 largest markets. Not included are single-family houses, condos for rent, rooms, efficiency apartments, and apartments with three or more bedrooms.

That rents can drop for years in San Francisco, despite the widely held belief that rents never drop, is shown in the long-term chart of Q1 asking rents emailed by Patrick Carlisle, Chief Market Analyst San Francisco Bay Area, at Compass: During the Dotcom bust, average annual asking rents in apartment buildings fell 25% from the peak in 2001 to the bottom in 2004. It took till 2012 before it surpassed by a visible margin the 2001 level. 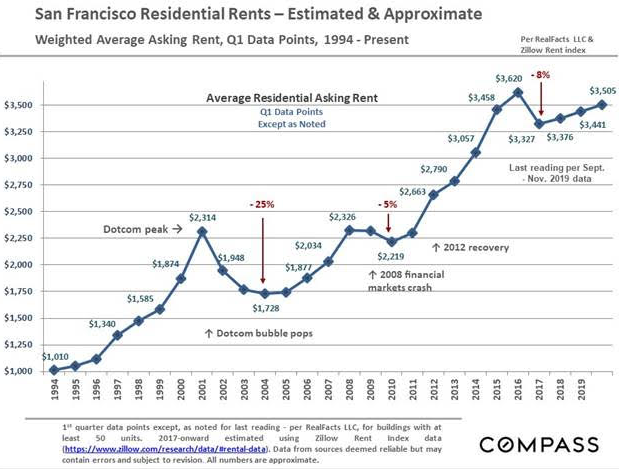 In Los Angeles, in San Diego, in New York City, and other expensive rental markets, rents also dropped in May from April. This has added to the weakness in those rental markets.

The table below shows the 16 most expensive major rental markets in the US by median asking rents. The shaded area shows their respective peaks and changes from those peaks, which has turned into a sea of red ink.

Chicago and Honolulu are on top of that group, with declines-from-peak of over 20% for 1-BR apartments and of over 30% for 2-BR apartments. Seattle, once a red-hot market, is also awash in red ink. As is Denver. And Miami. 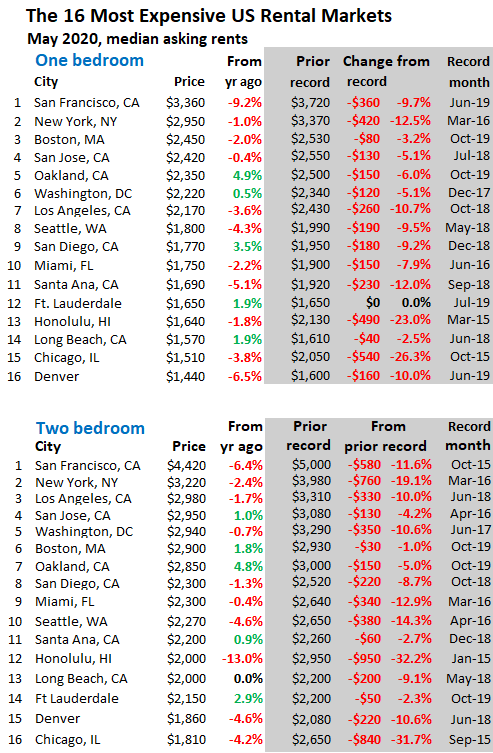 The Cities with the biggest percentage declines in 1-BR rents

The table below shows the 25 cities, among the top 100 rental markets, that had the biggest percentage declines in asking rents for 1-BR apartments in May year-over-year. What’s particularly interesting is the appearance of listings from the oil patch, including Tulsa, Baton Rouge, and Houston, but also markets in the Dallas-Fort Worth metro, such as Fort Worth and Plano:>

The Cities with biggest percentage increases in 1-BR rents.

Yes, rents are surging elsewhere. The table below shows the 25 cities with the largest rent increases among the top 100 rental markets, of which 16 booked double-digit rent increases, and seven booked rent increases of 15% or more, which comes as a massive shock to people who experience these types of rent increases:

Of the top 100 cities, in terms of 1-BR apartments, 49 cities experienced year-over-year rent increases. In 11 cities, rents remained flat. And in 39 cities, rents fell. This would indicate that across the US, 1-BR asking rents would be up just a tad from a year ago.

Below is the entire list of Zumper’s top 100 most expensive major rental markets, in order of 1-BR asking rents in May, with year-over-year percent changes. Median 1-BR rents in the $600 range exist in the US, in some nice cities too, including my former home town Tulsa, but you have to go to the bottom of the list to find them. You can use your browser’s search function to find a city (if your smartphone clips the table on the right – there should be six columns – hold your device in landscape position):

129 comments for “Rents in the Most Expensive Cities Drop. Oil Patch Gets Hit Too. But Massive Gains in Other Cities”