“They’re whistling past the graveyard and offering no analysis.”

The head of Canada’s national housing agency rang off yet another warning to homebuyers. Evan Siddall, the head of the Canada Mortgage and Housing Corporation (CMHC), warned people to question the motives of anyone that says home prices will rise in the near-term.

He does so before rattling off a list of economic pressures against the market. The tweet is self-explanatory to his primary demographic of banking and finance experts. However, it’s less so to the average millennial and homebuyer – so let’s unpack it with some data points.

“Please question the motivation of anyone who wants you to believe prices will go up (yes, up) with our economy in slow motion, oil being given away, millions of Canadians on income support and a greater % of mortgages not being paid than we’ve seen since the Great Depression.”

And he said, when he tweeted the link for the CMHC report:

“Here’s more on our house price outlook. Some vocal real estate advisors have labelled us “panic-inducing and irresponsible,’ saying essentially that house prices don’t go down. They’re whistling past the graveyard and offering no analysis. Here’s ours. You decide.”

“With Our Economy In Slow Motion”

Canada’s economy has been slowing in growth for a few quarters, even before the pandemic. It got much worse after the economic lockdown. Stat Can reported GDP fell 2.11% in Q1 2020, when compared to the previous quarter. Pre-pandemic growth in Q4 2019 also wasn’t very impressive though, coming in at the weakest level since the 2015 oil crash. With the exception of some noise in Q2 2019, GDP growth has been trending lower since the back half of 2017. This view gets even worse if you’re looking at the issue on a per capita basis. 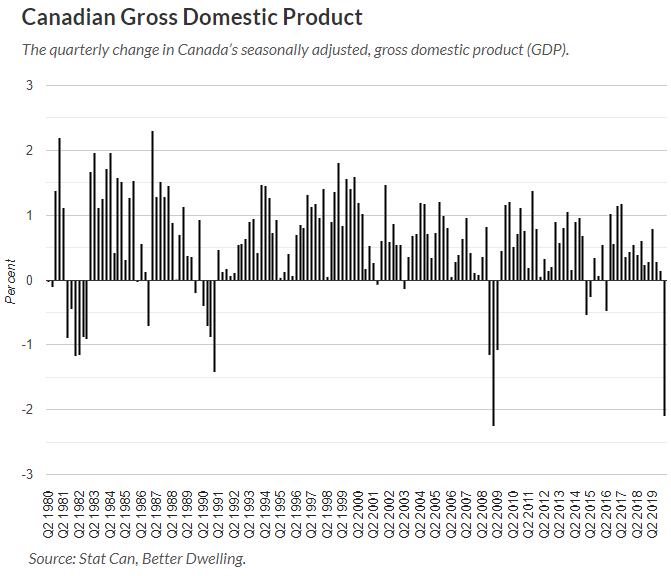 “Oil Being Given Away”

Oil began trading at a negative price, something a few systems didn’t even believe was possible. That is, people actually paid people to haul the value of their oil contracts away. It was a newsworthy, but relatively small blip, but the value of crude and energy products has been slipping for a while. Stat Can’s index for April fell 21.96% from the previous month. That puts the value 44.79% lower than the same month last year. Prices in this segment peaked in June 2008, and have been seeing lower and lower peaks ever since. 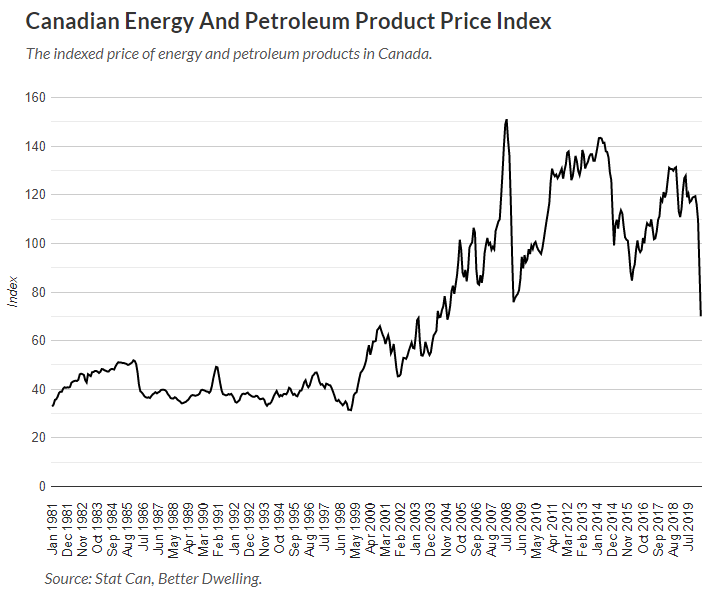 “Millions Of Canadians On Income Support”

Canadians use various forms of income support, but nothing highlights issues like CERB (Canada Emergency Response Benefit). The temporary emergency income support rolled out due to the pandemic had 6.7 million applicants by mid-April. At the end of May, the Canadian government estimates 8.29 million unique applicants. Considering Canada’s labour force is just 18.6 million, that’s 44.5% of them requesting emergency aid. Even if unemployment is still in the low teens, this implies a lot more people aren’t working – and quite possibly won’t have work to go back to.

“A Greater % Of Mortgages Not Being Paid Than We’ve Seen Since The Great Depression.”

Most analysis I’ve come across saying prices will climb, now depend on excluding a large segment of people. They’ve chosen to say those impacted by recent employment events, just weren’t in the market for a home. That narrative becomes increasingly harder to buy, considering we’re now at the point where almost half of the population has demonstrated being impacted. Even if the households impacted are all low income (which they aren’t), it’s worth remembering that one person’s spending is another’s income. By Stephen Punwasi, Better Dwelling

National home sales volumes in Canada have been sliding for a few years, but this is like nothing seen in a long time. Read… Canadian Home Sales See Worst April Since 1984, Montreal And Toronto Lead Lower