Pending sales of existing homes of all types in April – contracts on houses, condos, etc., that were signed in April but that haven’t closed yet – collapsed by 33.8% from April last year, after having plunged 16.3% year-over-year in March, with the index plunging to 69, according to the National Association of Realtors today. An index value of 100 represents the pending sales level of January 2001. 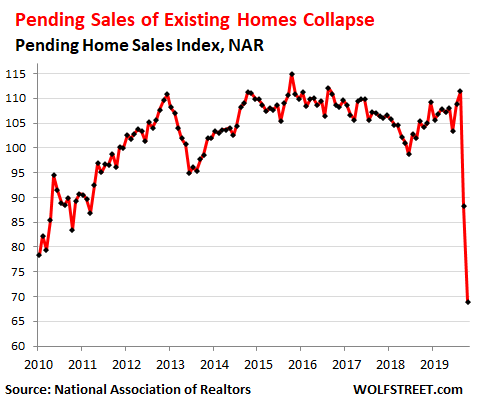 Based on this relationship, closed sales of existing homes in May might be down by 30% or more, year-over-year. This will be reported in June.

The plunge of the pending home sale index differed by region, ranging from a breath-taking collapse of -52.6% in the Northeast to a plunge of “only” -26.0% in the Midwest:

When sales volume collapses to this extent – no matter what the market is – it changes everything. It represents a market that has essentially frozen, with few buyers and few sellers, and lots of uncertainty. This is what happened in many other markets in the US, including otherwise very liquid markets, such as the wholesale market for used vehicles.

In May those markets have begun to unfreeze. Market participants have figured out how to deal with the requirements of social distancing. Keeping everyone reasonably safe during a pandemic that has already killed over 100,000 Americans in less than three months is a primary objective.

In the housing market, this has led to a change in the way business is conducted, including forays into accepting technologies, such as virtual open houses. This technology has been around for long time, but the pandemic pushed it into the foreground – like so many other technologies in so many other industries. And people are finding out that it sort of works.

More mass layoffs by big companies are announced every day, such as American Airlines’ message to its employees late Wednesday that it would cut its management staff by 30%. Delta came out with plans today to shed staff via early retirements and buyouts, along with Chevron that said it would cut up to 15% of its global workforce of 45,000 people, and Boeing which said it would cut 7,000 workers. Just one days’ worth of work, so to speak.

These are not restaurant jobs. These are jobs that come with good paychecks and benefits.

And this constant flow of announcements does two things: It creates uncertainty among potential home buyers that kept their jobs; and it removed potential home buyers from the market that have lost their jobs. This is a gigantic unemployment crisis, interspersed with a tsunami of bankruptcy filings, of even large companies such as Hertz, each accompanied by more layoffs.

So the housing market – in terms of sales volume – has two separate things to deal with:

One, the issues around keeping buyers, sellers, brokers, and others safe. The industry is addressing these issues in multiple ways, and is harnessing technologies to overcome the issues, and there is progress, and more deals are happening.

Two, the employment crisis that has already taken millions of potential buyers off the market. Even people who return to work after a stint on unemployment cannot instantly turn into homebuyers because it’s hard to get a mortgage, right after having been unemployed.

So volume will pick up some because the immediate issues of the pandemic are being dealt with successfully by the industry; but volume will not return to normal levels until employment has returned to normal levels – and having lost over 30 million jobs so far, this is just going to take a while.

180 comments for “No, Homes Did Not Sell Like Hotcakes: “Pending Home Sales” Plunged 34% in April, a Preview of “Closed Sales” in May”