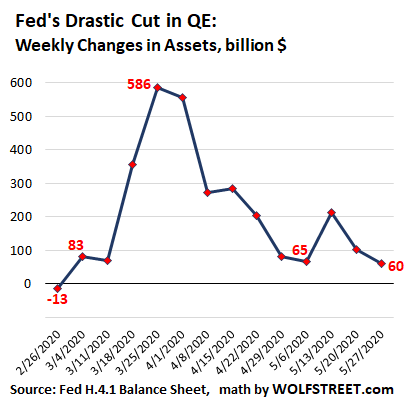 This $60 billion increase during the week was the result of diverging account movements – some rising, others falling. It raised the Fed’s total assets to $7.1 trillion: 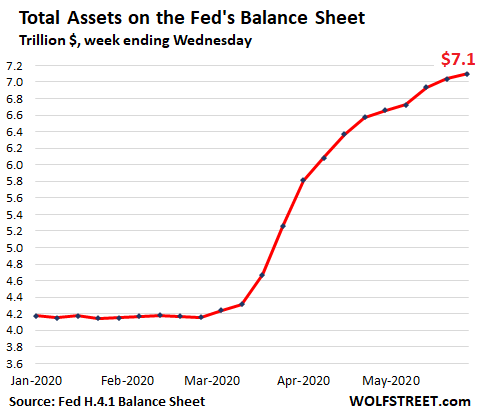 The Fed slashed its purchases of Treasury securities.

The Fed added just $11 billion of Treasury securities during the week, bringing the total to $4.11 trillion. The curve has been flattening as the Fed reduced its purchases over the past few weeks: 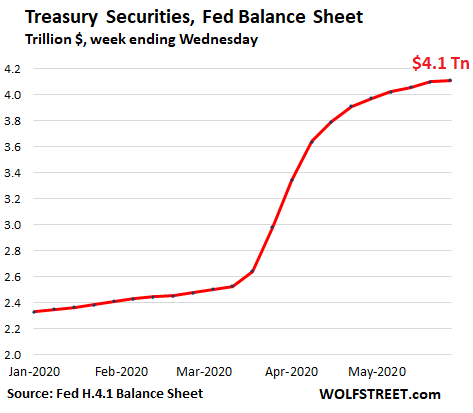 To put that $11 billion weekly increase in its Treasury holdings into perspective, it was the smallest increase since January 1, and just a small fraction of the $362 billion peak: 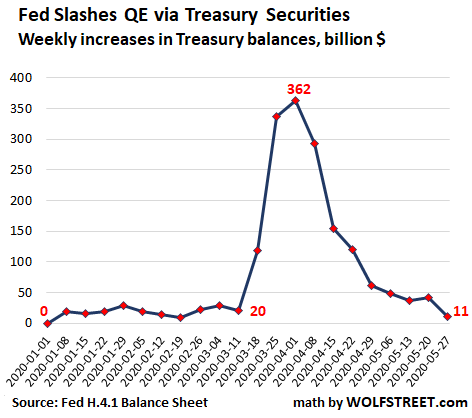 MBS: The Fed has been reducing its purchases of government-backed mortgage-backed securities (“Agency MBS”). At the peak in the week ended March 25, it purchased $157 billion in MBS. By the current week, this has plunged to just $18 billion.

CMBS: The Fed is also buying commercial mortgage-backed securities (on apartment buildings) backed by government agencies. In the first week of purchases (April 8), the Fed bought $3.5 billion, then cut the weekly purchases. In the current week, it practically stepped away from that market, and the balance has remained essentially unchanged at $8.9 billion.

There are two complicating factors with MBS:

MBS trades take a long time to settle, and the Fed books MBS only after they settled. The $18 billion in purchases in the current week will settle in June and July, which is when they will appear on the balance sheet. The current activity in the MBS balances stems from purchases that were made weeks ago.

So there are two opposite forces at work: The Fed’s purchases of MBS increase balances; and pass-through principal payments decrease balances.

The combination of much reduced purchases, the erratic settlement dates, and the torrent of pass-through principal payments caused the MBS balance to decline by $28 billion during the week, to $1.84 trillion: 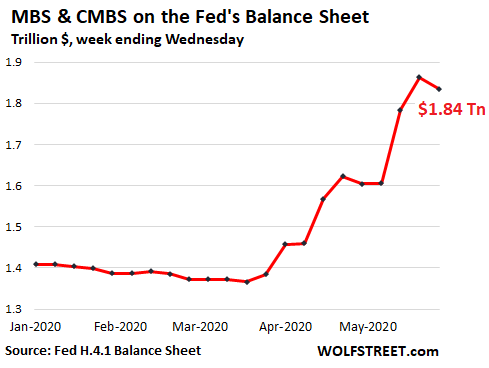 These are the bailout schemes, authorized, the Fed says, under Section 13 paragraph 3 of the Federal Reserve Act, as amended by the Dodd-Frank Act. Powell calls them “thirteen-three facilities.” The Fed creates a Special Purpose Vehicle (SPV) as a limited liability corporation. The US Treasury puts in some equity capital. The Fed lends to the SPV with a leverage ratio of 10 to 1. Then the SPV buys securities.

There are currently six SPVs that are active. So far, the amounts are relatively small, by Fed standards. There was an initial burst into early April. Then the total amount declined for weeks, while the composition changed. But this week, there has been a noticeable move in yellow. And over the past weeks, red has become the dominant color (details below): 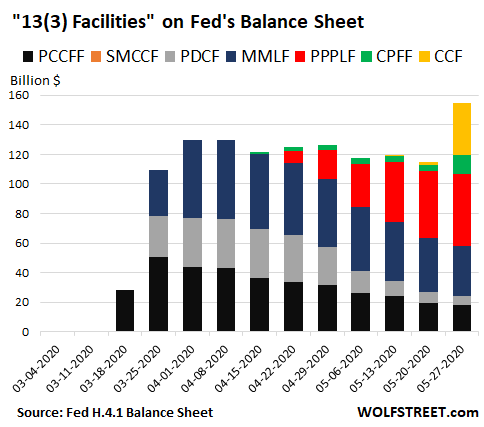 The color-coded segments in the chart show the amounts that the Fed lent to each of these SPVs.

The SPVs with increasing balances:

Yellow: Corporate Credit Facility (CCF). This SPV, managed by State Street as the custodian, buys corporate bonds in the secondary market. It jumped from $1.8 billion to $35 billion.

The SPVs with decreasing balances.

Gray: Primary Dealer Credit Facility (PDCF) dropped to just $6 billion, from the peak of $33 billion in early April: This SPV lends to the Fed’s primary dealers, and they use these funds to buy securities to “support the smooth functioning” of the market. They ramped up during the panic and are now winding down their positions.

Black: Primary Market Corporate Credit Facility (PMCCF) declined further, to $18 billion, from $51 billion on March 25. This SPV can buy bonds directly from companies when they issue them, including certain “fallen angel” junk bonds; it can also buy portions of syndicated loans at issuance. It appears that companies have little need to use this type of funding – now that the bond market has embarked on a wild yield chase.

The Fed’s “dollar liquidity swap lines” with other central banks has been roughly flat for four weeks, up just a smidgen this week, at $449 billion (country data via the New York Fed): 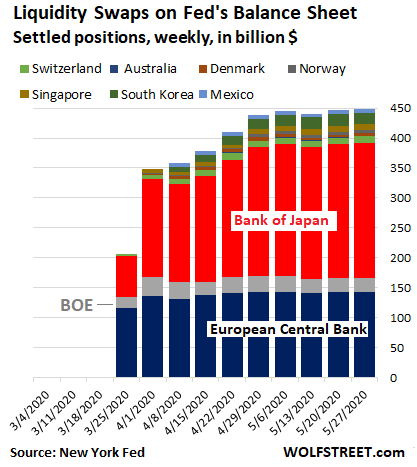 The Bank of Japan continues to increase its use of these dollars and now accounts for 50.3% of the total, with $226 billion in swaps.

With these swaps, which mature in 7 days or 84 days, the Fed lends newly created dollars to other central banks and takes their domestic currency as collateral, at the market exchange rate. When the swap matures, the Fed gets its dollars back, and the other central bank gets its currency back.

The Fed is still offering huge amounts of repos every day, but there has been little demand for them. Total repo balance ticked up by $23.8 billion to $181 billion, the result of an overnight repo of $24.6 billion, of the $500 billion offered. Most of the repos left on the balance sheet are term repos from March: 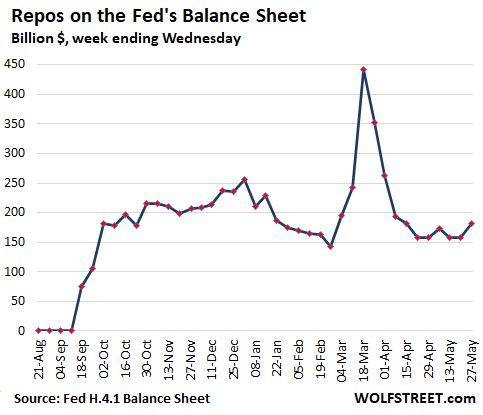 Since March 11, the Fed has printed $2.78 trillion to inflate asset prices across the spectrum and bail out those that owned those assets. The Fed also wanted to restart the chase for yield that makes investors reckless and trains them to count on future bailouts when it hits the fan again.

If the Fed had spread that $2.78 trillion equally over the 130 million households in the US, each household would have received $21,426 – welcome help in this crisis for less-well-off households. But this was not for them. It was helicopter money for Wall Street and asset holders.