YRC, one of the largest less-than-truckload carriers, wheezes under the strain.

The hope is that April was the bottom, that volumes can’t fall further, that factories and retailers will gradually open and that consumers and businesses will buy these goods, and that trucks and railroads will roll again. That’s the hope. It might take a long time to get back on track, but at least the hope is that the plunge in the demand for transportation services bottomed out in April.

Shipment volume in the US by truck, rail, and air collapsed by 22.7% in April compared to April last year, and is down 25% from April 2018, according to the Cass Freight Index for Shipments today. It was the 17th month in a row of year-over-year declines, where the Covid-19 crisis came on top of a harsh freight recession that had started in late 2018. April was also the steepest plunge since the Great Recession, but not far behind: 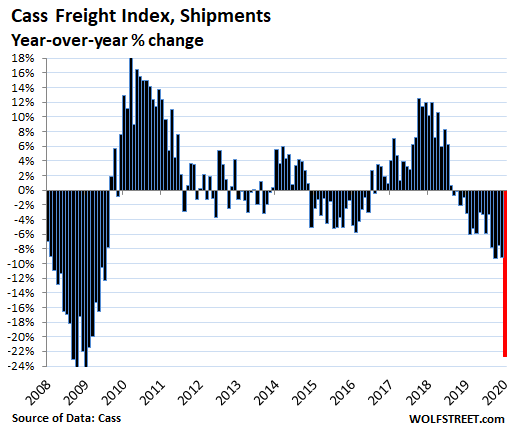 The transportation business was split in two: trucking companies in the ecommerce supply chain, including package carriers such as UPS, and those in the supply chain for supermarkets, warehouse clubs, home improvement stores, and the like were busy. UPS reported that its mix had shifted dramatically, with business-to-business shipments plunging, and with business-to-consumer shipments surging due to the boom in ecommerce.

For trucking companies carrying other goods, it was terrible.

In the stacked chart below, the top black line represents 2018 with its historic shipping boom when companies were front-running the potential tariffs. The green line represents 2019, which deteriorated throughout the year. The red line represents 2020 which started out weak and the plunged. The index for April was the lowest reading since April 2009 (light brown at the bottom): 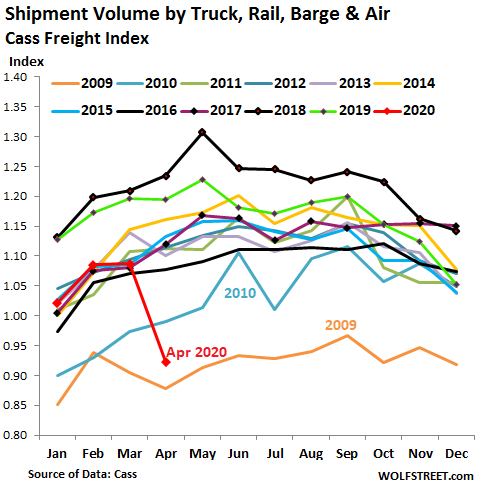 The Cass Freight Index tracks shipment volumes of consumer goods and industrial products and supplies by all modes of transportation, but is more focused on trucking. It does not track bulk commodities, such as grains or coal.

“Coal and autos were by far the worst-hit commodities in April, but declines spanned the industrial spectrum, hitting finished steel and steel scrap, chemicals, petroleum products, sand and stone, and much else,” the report said.

“We don’t know exactly when it will happen, but our economy – and rail traffic – will rebound,” said AAR Senior VP John Gray.

Now the question floating through the trucking business is which carrier will be next, after Celadon collapsed messily, ceased operations, and filed for bankruptcy in December last year, the largest truckload-carrier bankruptcy in US history. But that was just a regular freight recession that had tripped up the carrier which had been tangled in accounting fraud and other issues. Now trucking companies are trying to maneuver through the deep crisis.

Stifel Financial equity research analyst David Ross, in a note to clients on Tuesday, cited by FreightWaves, said that he has suspended his rating and estimates for YRC Worldwide [YRCW], one of the largest less-than-truckload (LTL) carriers in the US.

In its quarterly earnings report on Monday evening, YRC announced that it may not be able to comply with two debt covenants in the future. The covenant of its term loan requires a $200-million minimum trailing-twelve-month Adjusted EBITDA (earnings before interest, taxes, depreciation, and amortization); it had been able to waive the covenant for 2020, with the interest rate being reset to 14% for the first six months of 2020. But it does “not believe” that it will be able to comply with the covenant after January 1, 2021.

And it said that it may not able be to comply with the liquidity covenant of the term loan. “While a number of actions are being taken to manage liquidity, the duration of the current economic slowdown is uncertain, and these actions may not be sufficient if the economic environment is impacted for a sustained period of time,” it said.

A bailout remains more than uncertain: It said concerning any Covid-19 emergency loan from the government for the Fed: “Even if we were able to qualify for such assistance, we cannot predict the manner in which any assistance would be allocated or administered and we cannot assure you that we would be able to access such assistance in a timely manner or at all.” So for now, nada.

YRC’s volume for April was down 24%. And during the earnings call, executives refused to take analysts’ questions due to a “tremendous amount of uncertainty surrounding COVID-19 and the rapidly changing environment.”

Stifel’s Ross pointed out that other trucking companies experienced smaller declines in LTL volumes than YRC in April, including Old Dominion Freight Line (-15.3%), ArcBest (14) and Saia (-13%).

On Tuesday morning, after the earnings announcement – with some metrics beating “analysts’ expectations” – the stock surged 20% initially. But today reality began to set in once again; shares of the long-troubled carrier dropped 7.6% during regular hours and another 1.9% after hours to $1.54. The company’s market cap is down to just $63 million.

So now the hope is that April was the bottom, that freight volume will pick up in May as factories and retailers begin reopening. Trucking rates have started to tick up in May in many regions.

DAT Freight & Analysis in a blog post points to improvements in the produce regions of California, Texas, and the Southeast, and at port markets that are “gaining traction, even in the Northeast,” and at other key markets where things are beginning to stir. “Obviously, we still have a long way to go, but it’s a step in the right direction toward providing some much-needed relief for carriers.” And that’s the hope, that April was the bottom, and that the improvements, however small and insufficient they may be, will continue.

Some prices collapsed, others skyrocketed, and the Consumer Price Index went haywire. Here’s what I’m seeing beyond the near term — and it’s not “deflation.” Read…. A Word About the Current Chaos in Prices and Inflation

55 comments for “First the Freight Recession, Now Covid-19: Trucking & Rail Freight Collapses. Is This the Bottom?”