House prices in the five-county San Francisco Bay Area – the counties of San Francisco, San Mateo (northern part of Silicon Valley), Alameda and Contra Costa (East Bay), and Marin (North Bay) – were unchanged in December compared to November and were below where they’d first been in May 2018, according to the 20-City S&P CoreLogic Case-Shiller Home Price Index released today. Note the double peak: 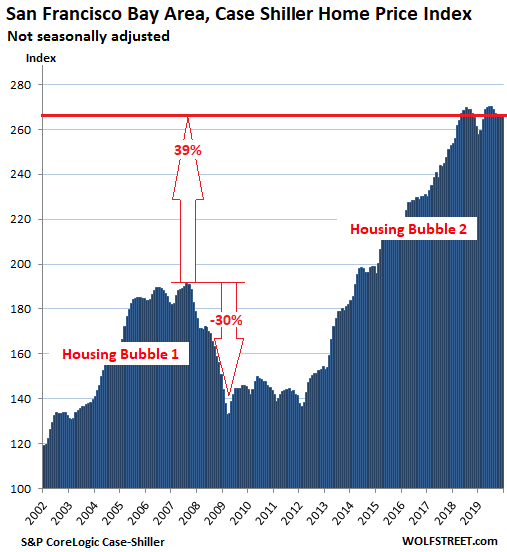 The way the Case-Shiller Index is structured – based on “sales pairs,” it compares the sales price of a house that sold in the current month to the price of the same house when it sold previously – makes it a less volatile index than “median price” indices that can move up and down wildly. In addition, the index is a rolling three-month average: Today’s release includes closings that were entered into public records in October, November, and December.

All charts here are on the same scale, with the vertical axis ranging from 100 to 290. Los Angeles is now within a hair of hitting the top of the scale, making it the market of the 20 in the index that has risen the most since 2000.

House prices in the Los Angeles metro remained flat in December compared to November, at a record level, and were up 2.7% from a year ago, and up 189% since January 2000: 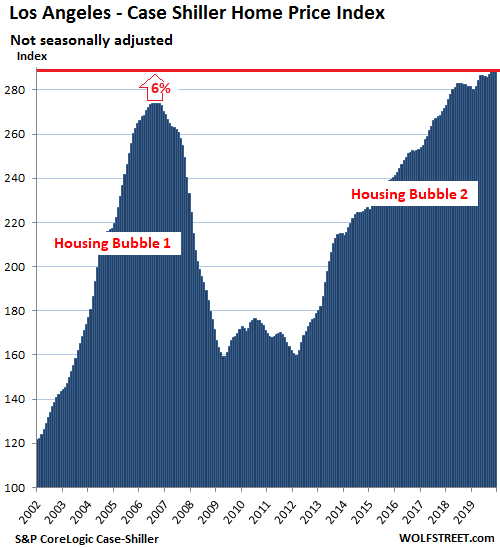 House prices in the San Diego metro have essentially remained flat for the past six months but are up 4.7% from December a year earlier due sharp price increases in the first half: 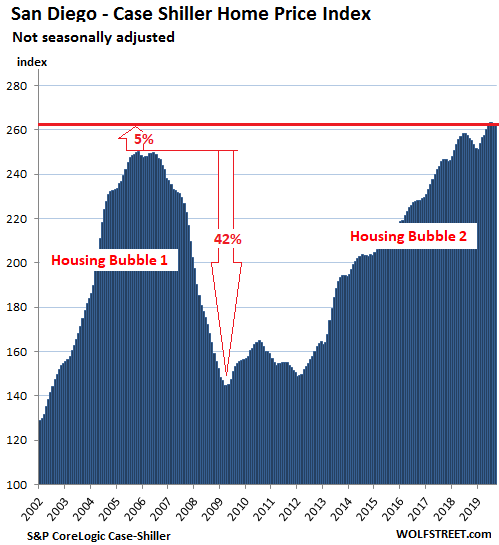 The Case-Shiller Index for the Seattle metro ticked up 0.2% in December from November but remains below where it had first been in May 2018. Also note the double peak: 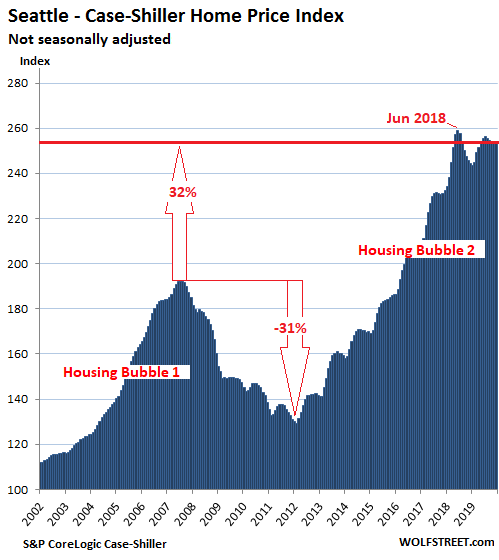 Case-Shiller uses a custom area for its New York City index that includes numerous counties in the states of New York, New Jersey, and Connecticut “with significant populations that commonly commute to New York City for employment purposes.” This area is far more diverse than Manhattan by itself, and the turmoil in the Manhattan condo and co-op market amid rampant oversupply of newly built high-end units is only one of many factors impacting the index.

Condo prices in the metro ticked down 0.5% in December from a year earlier and were back where they’d first been in January 2018: 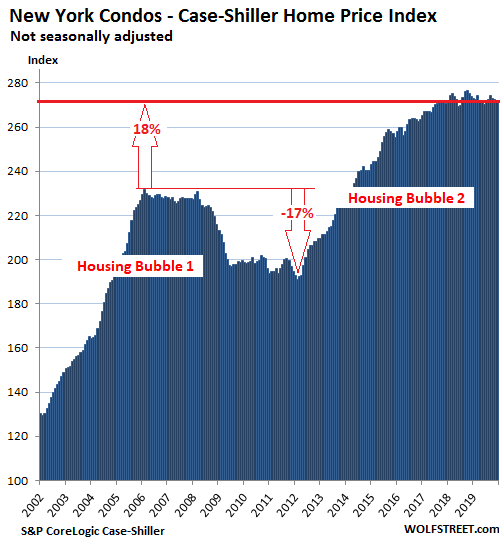 This is “House-Price Inflation.”

Because the Case-Shiller Index compares the sales price of a house in the current month to the price of the same house when it sold previously, it tracks how many dollars it takes over time to buy the same house. The house didn’t get twice as big, but it just takes twice as many dollars to buy the same house. In other words, it measures the purchasing power of the dollar with regards to houses. This makes the Case-Shiller Index a good measure of “house-price inflation.”

Single-family house prices in the Miami metro edged up 0.1% in December from November and rose 3.2% year-over-year. The index is still down 12% from the craze at the end of 2006. Note that the index doesn’t track condos; but in the condo market, oversupply of newly built luxury units is creating very tough dynamics. 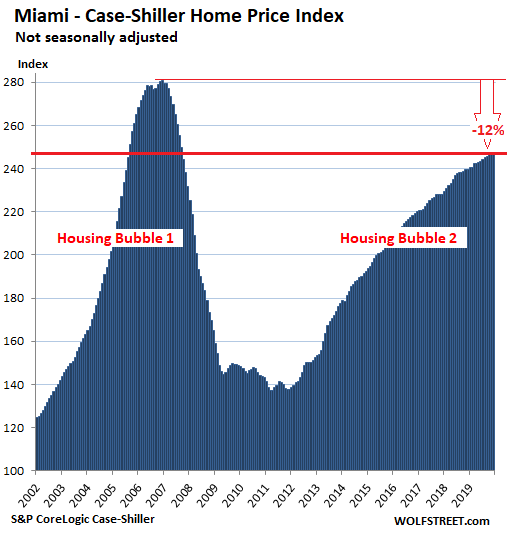 House prices in the Portland metro ticked up 0.2% in December from November, have remained essentially flat for the past six months, and were up 3.7% year-over-year: 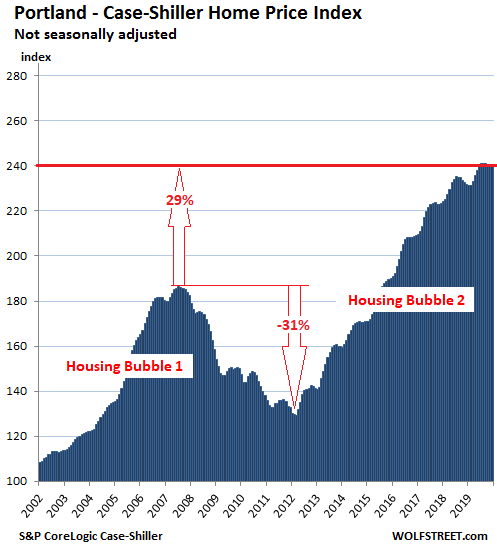 House prices in the Washington D.C. metro ticked up 0.2% in December from November, have been essentially flat for seven months, and were up 3.4% year-over-year: 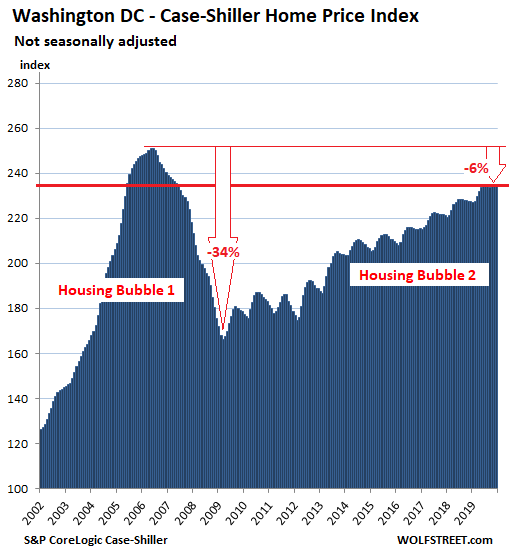 The Case-Shiller index for the Boston metro has remained essentially flat for five months and was up 2.6% year-over-year. Boston’s index value of 256 means that house prices rose 156% since January 2000: 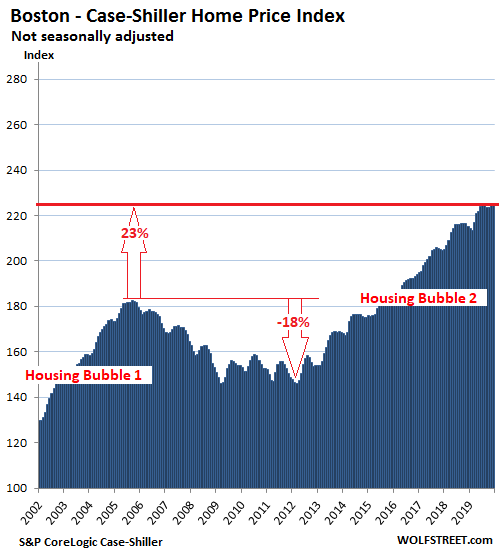 House prices in the Tampa metro inched up 0.1% in December from November and were up 5.2% year-over-year, the third-largest year-over-year increase of the metros in the 20-City index, behind Phoenix (+6.5%) and Charlotte (+5.3%): 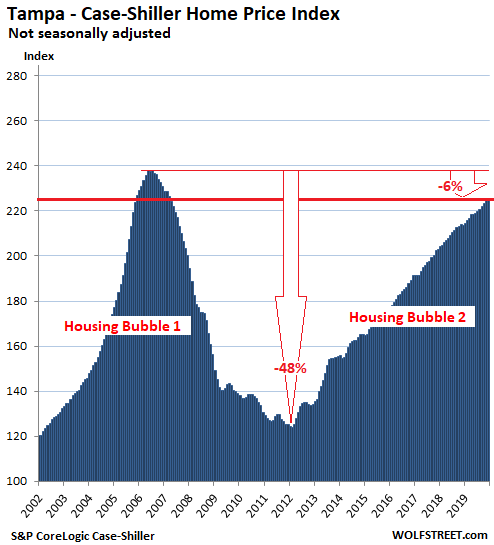 House prices in the Denver metro ticked down in December from November, have been essentially flat since May 2019, and were up 3.7% compared to December 2018: 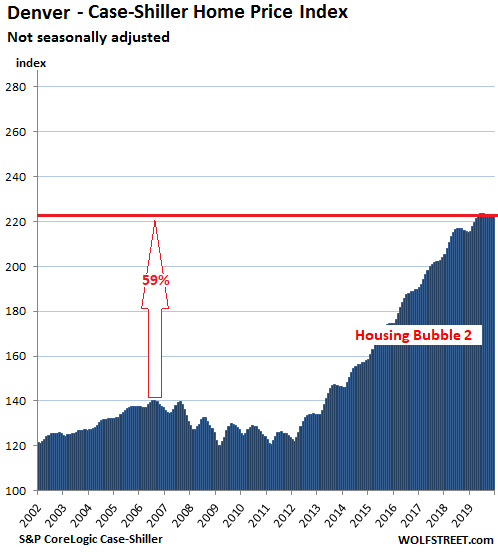 The Case-Shiller Index for the Las Vegas metro edged up 0.1% in December from November and rose 2.6% year-over-year, having been essentially flat for six months: 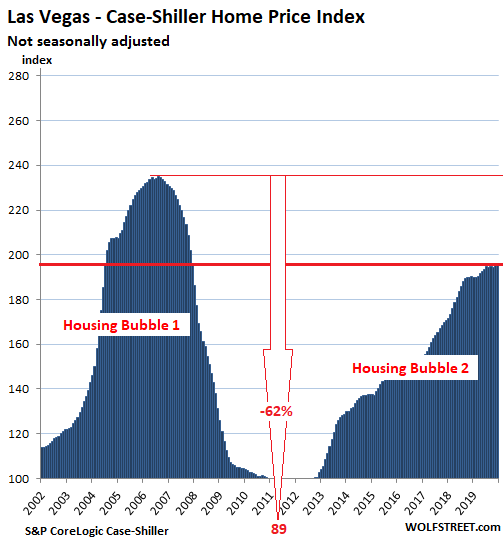 House prices in the Phoenix metro rose 0.6% in December from November and were up 6.5% year-over-year, the #1 fastest year-over-year house-price inflation among the metros in the 20-City Index, homing in on the mad levels of 2006, having doubled since September 2011: 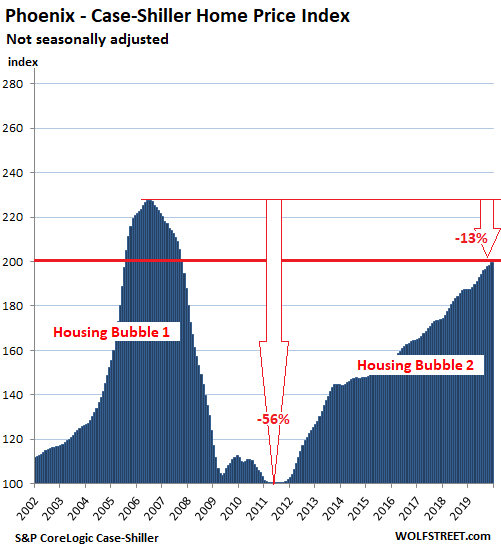 The Case-Shiller Index for the Dallas-Fort Worth metro – the counties of Collin, Dallas, Delta, Denton, Ellis, Hunt, Johnson, Kaufman, Parker, Rockwall, Tarrant, and Wise – inched down 0.2% in December from November, which whittled the year-over-year gain down to 2.6%. The index value of 193 means that since 2000, house price inflation was 93%: 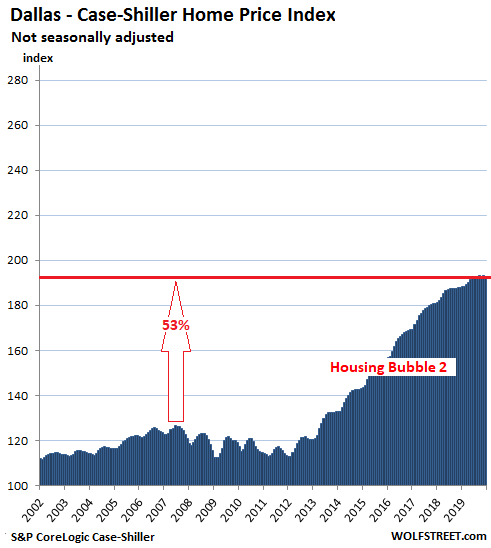 House prices in the Minneapolis metro fell 0.6% in December from November but were up 3.7% year-over-year: 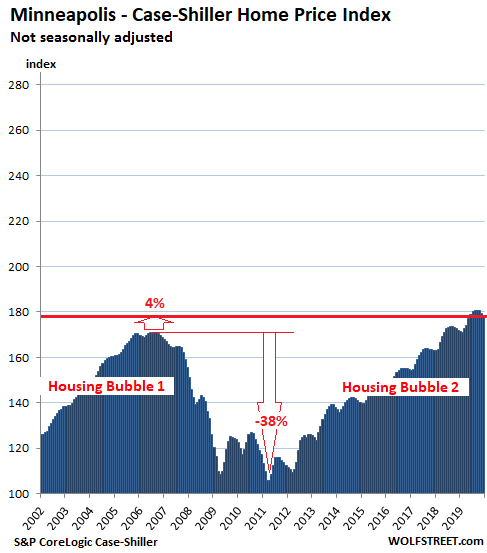 House prices in the Charlotte metro were flat in December from November but were up 5.3% year-over-year, the second-fastest house-price inflation in the 20-City Index, behind Phoenix: 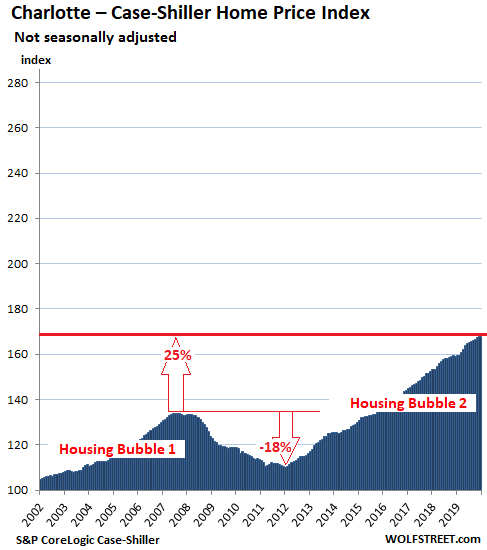 House prices in the Chicago metro – the counties of Cook, DeKalb, Du Page, Grundy, Kane, Kendal, McHenry, and Will – ticked down 0.1% in December from November and were up 1.0% from a year earlier, and back where they’d been in May 2018: 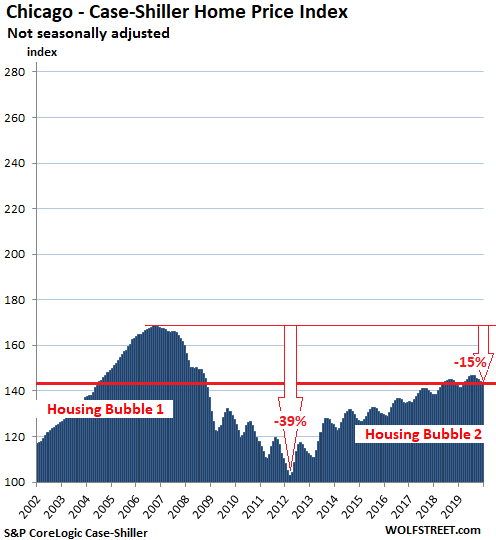 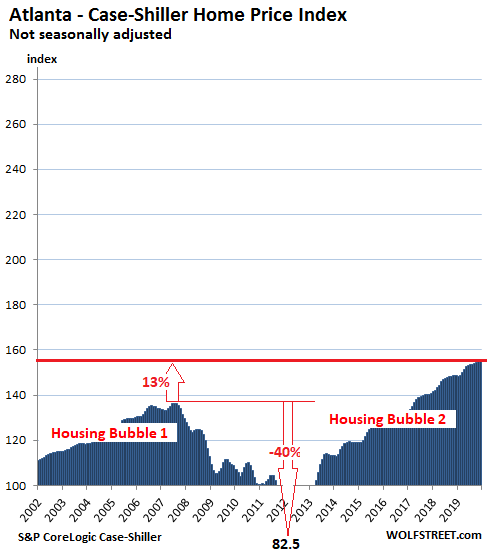 It’s clear from the way these charts look – the way they’re wildly different – that there is no unified “national” housing market, and that any measure of “national’ housing market averages out these wildly different local dynamics. But it’s also clear that these local markets are subject to national dynamics, such as the Fed’s monetary policies which have led to over a decade of interest rate repression, and hence low mortgage rates, and hence surging house price inflation.

It’s not only Chinese tourists, business travelers, and property buyers who’re not showing up, but also travelers from all over the world who’ve gotten second thoughts about sitting on a plane. Read…  Coronavirus Slams Airbnb, Airlines, Hotels, Casinos, San Francisco, Other Hot Spots

137 comments for “The Most Splendid Housing Bubbles in America, Feb. Update”