The Los Angeles metro housing market has some of the most expensive properties in the US. They’re listed at aspirational prices, and they sell for a lot less, years after having been first listed. The most expensive home on the market, according to Redfin, is this 20-bedroom 19-bath on 67 Beverly Park Ct in Beverly Hills that took years to build. It lists for $165 million, and the developer apparently hasn’t sold it yet:

Then there’s the reality of the deals that are actually being made, for example, as pointed out by Curbed Los Angeles:

It’s been a rough year for luxury properties. The Bel Air mansion that was once the nation’s priciest listing at $250 million sold in October for a mere $94 million, and a vast hilltop property once listed for $1 billion sold at auction for $100,000 in August.

Deals are eventually made, including a sale that broke the price record in California last December, when Rupert Murdoch’s son Lachlan Murdoch forked over about $150 million for the Chartwell Estate, which had originally been listed for $350 million.

But the housing market is not dominated by the super-hyper-stratospheric-end. It’s dominated by the bulge around the middle and below the middle. And there is now a discrepancy forming in how demand and lack of affordability are carving up the Los Angeles market.

Yesterday, I reported on The Most Splendid Housing Bubbles in America, based on the Case-Shiller Home Price Index data. It included the index for the Los Angeles metro, the market in the 20-City Case-Shiller Index that has experienced the most house-price inflation since the year 2000, with prices having inflated by 190% over the 20-year period.

Today we’re diving into the price layers of the index, and into the condo price index, which the Case-Shiller Index also provides for Los Angeles (data via St. Louis Fed’s FRED database): Turns out, at the “low tier,” meaning the bottom third, prices have surged ginormously and continue to surge, but the “high tier,” meaning the top third, and the condo market have hit rough waters.

The 18-year chart below shows Housing Bubble 1 and Housing Bubble 2, with the three price tiers for houses, and with condos. The index value at the top of 350 means that at this point, prices increased 250% since 2000.

In other words, the low-tier prices do the most skyrocketing and the most plunging. 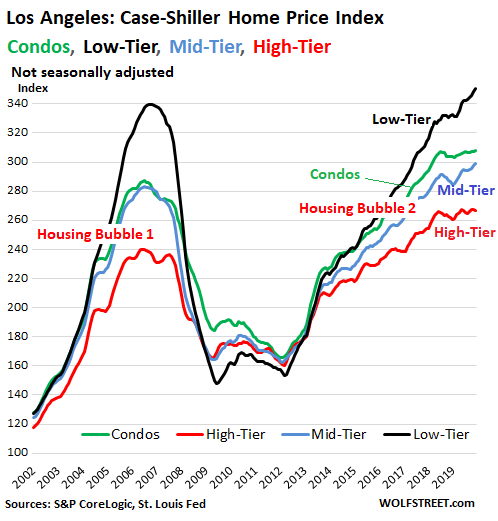 The chart below shows the price movements of the same four indices since January 2013, when they all had an index value of around 180, meaning that prices have risen about 80% since 2000 across the board.

But since July 2018, prices in the low-tier (black) have surged nearly 7% while prices at the high-tier (red) and condo prices (green) have stalled, wobbling but going nowhere, with no change in price since July 2018: 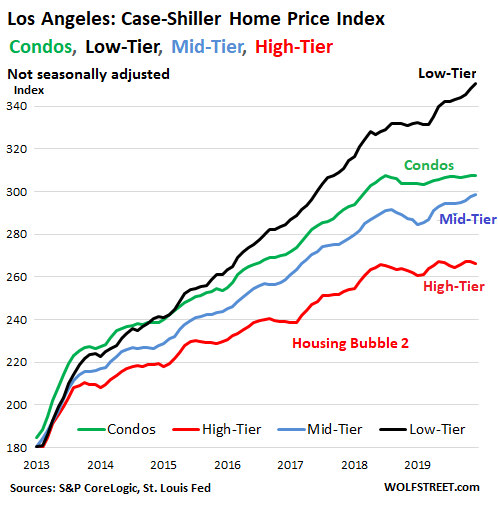 This divergence is even clearer in the chart below, going back to 2016. Note the dip in prices after July 2018 of condos, mid-tier houses, and high-tier houses, but there was no discernible dip in the low tier: 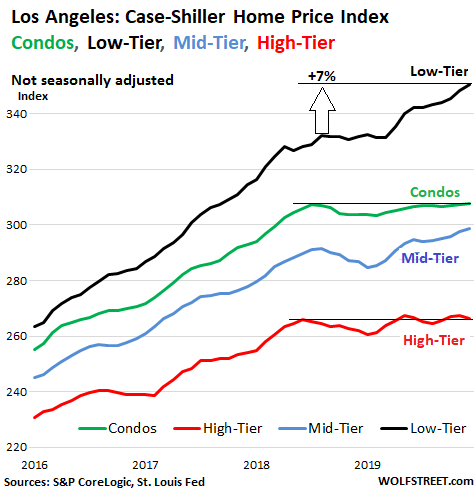 Obviously, this “low tier” that is currently so hot in the Los Angeles metro is not the playground for “low-income” households. Those houses are still expensive, and their prices have outrun wages for years by a big margin. They’re just in the lower third of the spectrum, and the whole spectrum has moved up.

What is happening is that as incomes cannot keep up with this type of blistering house-price inflation, buyers are stepping down the ladder, based on what they can (barely) afford. And this creates massive demand at the low tier, which drives up prices further, while demand has fizzled at the high tier.

And condos face another dynamic: An onslaught of supply, the result of a construction boom, including new condo towers in central Los Angeles. Nearly all of this new supply is high-end, because that’s where the money is, given the expense of new construction in Los Angeles. But that’s not where the market is, and prices run into resistance.