Some prices collapsed, others skyrocketed, and the Consumer Price Index went haywire. Here’s what I’m seeing beyond the near term — and it’s not “deflation.”

Amid soaring prices of meat, beverages, fruit, veggies, and other food at home, and surging costs of personal goods, medical care services, and household furnishings, and amid a collapse in prices of gasoline, car rentals, public transportation, car insurance, lodging away from home, and other things – amid these diametrically opposed price movements, the Consumer Price Index went, as expected, haywire today. And we’re going to look at some of those gyrations beyond it.

First, here’s what got buffeted around:

The overall Consumer Price Index fell 0.8% in April from March, the steepest one-month drop since December 2008, when the economy was going through peak-Financial-Crisis 1. This brought the increase over the past 12 months down to 0.3%, the lowest since October 2015 during the oil bust at the time.

The “core” CPI – CPI without the volatile food components and the extremely volatile energy components – dropped 0.5% from March to April but was still up 1.4% from a year ago.

What if we take out the most chaotic and largely temporary price movements at both ends to get to what the undying loss of the purchasing power of the dollar might be? Because that’s what consumer price inflation is.

There is a consumer price index that is not buffeted around by the month-to-month collapse of some prices and surge in other prices; The Cleveland Fed’s “Median CPI,” which is based on the data from the CPI, removes the extremes at both ends since these extremes are often temporary and distort long-term inflation trends. 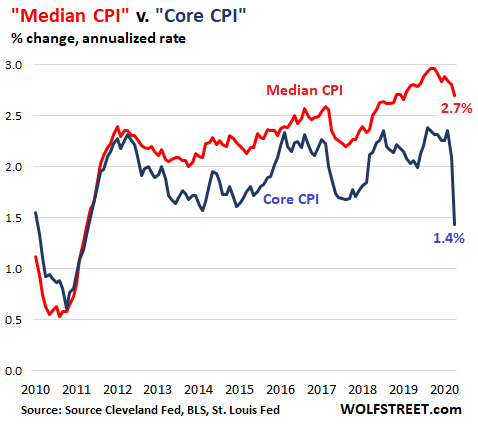 The table below shows the price movements of the major 45 CPI components in April, ranked from the biggest price decliners at the top to the biggest price gainers at the bottom, but converted to an annualized rate, meaning April’s price change extrapolated to an entire year (if you don’t see all four columns on your smartphone, hold your device in landscape position):

So will the dollar gain purchasing power? Hardly.

In my entire lifetime, there were only a few quarters when the dollar gained purchasing power (deflation) – and only a little. The rest of the decades, it relentlessly lost purchasing power (inflation), and during some of these years the loss of purchasing power was in the double digits. There is no reason to think that this pattern will change going forward. So I’m never worried about deflation – if there is any, it’ll be brief.

But right now, prices and the data that attempt to reflect them are going haywire. Since late February, the supply chains have been thrown into turmoil as buying patterns changed, including a massive shift of consumption from businesses and institutions to consumers at home. There were episodes of panic-buying and empty shelves. In other parts of the supply chain – such as those for hotels and restaurants – similar items were piling up with no place to go.

Ecommerce boomed to the point of exceeding fulfillment capacity, and sales at stores that sold groceries boomed. But much of the rest of brick-and-mortar retail was shut down. New vehicle sales in April plunged by about 44%. Used vehicle sales plunged similarly.

All this has an impact on prices – and if you’ve been to the supermarket, you’ve seen the impact there, as stuff is getting pricier. But filling up your car got a lot cheaper.

The government is borrowing trillions of dollars – mostly monetized by the Fed’s money-printing machinery – and is distributing these funds to various entities including consumers via unemployment benefits and stimulus checks, to companies, and to investors in form of investor bailouts. Much of this money is going to get spent, even if it isn’t along normal spending patterns.

In this chaotic environment, the price measurements can produce chaotic results. The Median CPI eliminates the chaotic outliers on both sides of the CPI and shows that underlying inflation is ticking down some but isn’t plunging.

And you can already see the impact of fiscal stimulus at the grocery store. A lot of people are out of work, but many of them receive unemployment benefits, and just about all of them have already or will receive the stimulus payments. This money is getting spent.

There is now a huge amount of fiscal and monetary stimulus being thrown into the economy at the same time. The monetary stimulus has already led to a massive bout of asset price inflation in the financial markets since March 23. And the fiscal stimulus – the ca. $3 trillion already under way and whatever future stimulus package might still emerge – which will get spent in the economy will put upward pressure on consumer prices. And there is a good chance that beyond the very near term it will lead to more consumer price inflation – meaning, a steeper loss of purchasing power of the dollar than we have seen in recent years.

Tenants’ collapsing one after the other without replacement has a pernicious impact on property prices. Read… US Commercial Real Estate Prices Plunged in April, Mall Prices Collapsed