“Insured unemployment rate” in California spiked to 27.7%, “continued claims” hit 4.8 million. In terms of “initial claims,” Georgia & Florida move into 1st and 2nd, ahead of California.

State unemployment offices have processed 2.98 million “initial claims” for unemployment  insurance in the week ended May 9, according to the US Department of Labor this morning. This brings the total number of initial claims processed over the past 8 reporting weeks since mid-March to a gut-wrenching 36.84 million (seasonally adjusted). Today’s claims were over four times the magnitude of the prior spikes in the unemployment crises in 1982 and 2009.

While the weekly explosion of initial claims has slowed from prior weeks, the number of people still filing for unemployment insurance in the week ended May 9 was still at a catastrophic level: 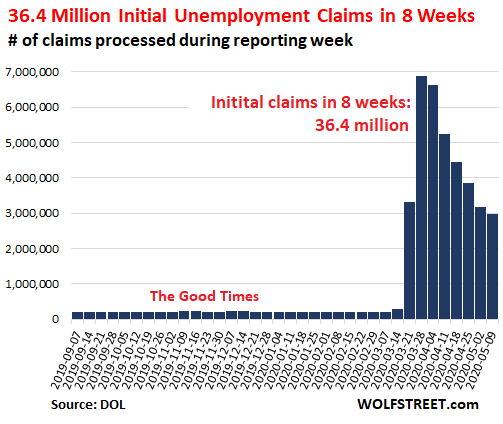 People who filed an “initial claim” for UI and who still don’t have a job a week later are added to “insured unemployment.” These “continued claims” lag the “initial claims.” 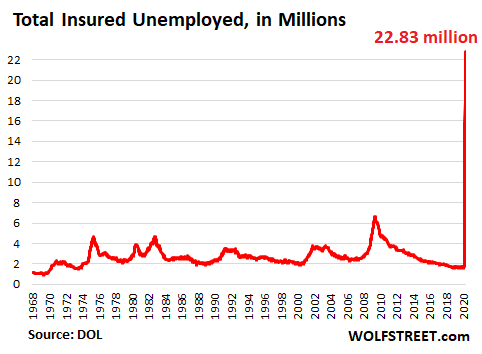 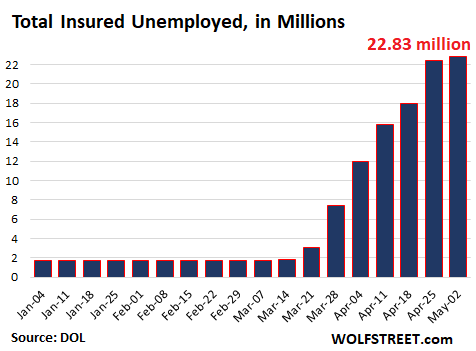 While nearly 3 million new people filed for unemployment insurance in the week, the total number of people considered “insured unemployed” has “only” grown by 456,000 – meaning that about 2.5 million of the 33 million that had filed previously were either back at their old jobs or have found new jobs – such as people that Amazon, Walmart and others hired to deal with the onslaught of online orders.

The 26 states with the most “initial claims,” week ended May 9.

California, which used to dominate this list with weekly claims of around 1,000,000, fell into third place, with initial claims now down to 214,028. The California unemployment office has largely caught up with the backlog and is now processing initial claims by gig workers, the self-employed, and contract workers.

The 18 states with the highest “Insured Unemployment Rates”

The national average “insured unemployment rate” for the week ended May 2 ticked up to 15.7% from the prior week’s revised 15.4%, according to the Labor Department today. The record in the pre-Covid-19 era was 7.0% in May 1975.

California exploded onto this list with a mind-boggling leap in the insured unemployment rate, from 10.9% in the prior week to 27.7% in this reporting week. Clearly, some catching up with the data was being done here. In total, there are now 4.8 million insured unemployed in California.

Seven states had insured unemployment rates of over 20%:

Reconciling weekly “insured unemployed” with the unemployed in the jobs report.

The number of “insured unemployed” in today’s report is based on UI claims. By contrast, the number of unemployed released in the monthly jobs report is based on household surveys and does not reflect UI. Not all of the people who are out of a job and are looking for work, as identified by the household survey, are receiving UI benefits. Generally, there is a large difference between the two.

But under the stimulus package, the UI benefits have been expanded to workers who were not eligible before. And the number of “insured unemployed” of 22.8 million is relatively close to the number of unemployed in the jobs report for April, 22.3 million.

However, the jobs report for April, released on May 8, lagged by nearly one month, with the survey data referencing the week between April 12th through April 18th. Since then, there have been many more layoffs, some of which are now showing up in the “insured unemployed.” Both reports lag to some extent – and in both report the number of unemployed is already over 22 million.

The reasons behind the Fed’s No-NIRP stance: It doesn’t work and kills bank stocks. One of the most revealing statements. Read… What Powell said About Negative Interest Rates, Their Effect on Banks, Jawboning, and Why the Fed Might Not Buy a Lot of Junk Bonds

171 comments for “Week 8 of the Collapse of the U.S. Labor Market: Nearing a Previously Unthinkably Deep Bottom?”