Tens of millions of people, many at the lower end of the income scale, lost their jobs. But stocks surge thanks to the Fed’s helicopter money for Wall Street & asset holders.

The total number of employed people collapsed by 22.3 million in April from March, the largest monthly drop in the history of the data series going back to 1948. This left only 133.4 million people still employed, the lowest level since June 1999. This is based on surveys of households by the Bureau of Labor Statistics and includes full-time, part-time, and gig workers: 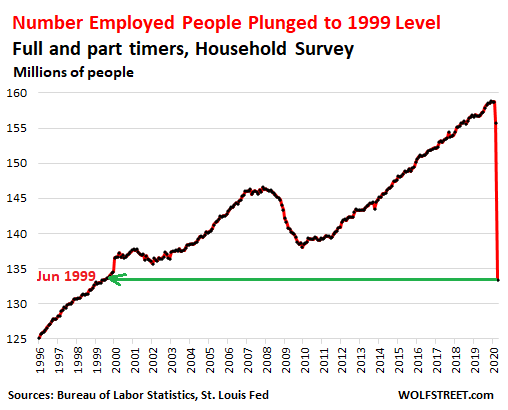 The number of part-time workers, including gig workers, who’d rather work full time nearly doubled to 10.9 million. This includes those who were full-time workers and then got their hours cut in April and people who were part-timers before but were looking for a full-time job. 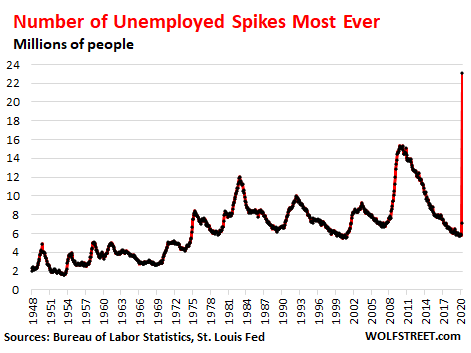 The unemployment rate spiked over 10 percentage points in April from March, the largest monthly increase in the history of the data going back to 1948, to 14.7%, the highest unemployment rate ever in the data: 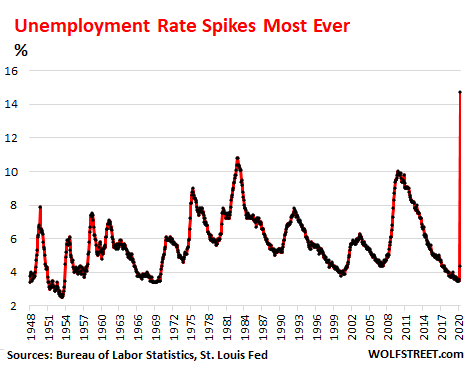 The Employment-Population Ratio collapsed by 8.7 percentage points in April from March, to 51.3%, the lowest ratio in the history of the data going back to 1948. This ratio, based on household surveys, shows the percentage of people who have jobs compared to the overall working-age population (16 years and older). It includes full-time, part-time, and gig workers. 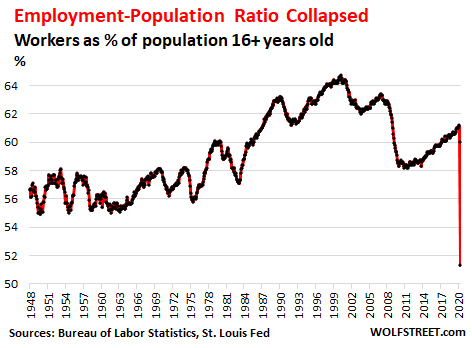 The above data was what households reported. Employers look at it from their point of view. And employers reported that they eliminated 20.5 million jobs in April, after having cut 870,000 jobs in March. This was the largest monthly job loss ever. Employment losses were spread across the industries, but hit some industries particularly hard, with leisure and hospitality at the top:

Interestingly – because it shows that the layoffs hit people on the lower end of the income scale harder than people up higher on the income scale – employers reported that average hourly earnings jumped by 4.6% in April from March, the biggest monthly jump ever, to $30.01 per hour, after shedding lower-income employees, including those in the leisure and hospitality sector, where pay is relatively low, and where employment plunged by the most: 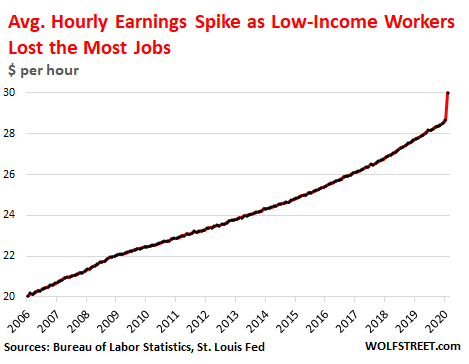 The hope in this gut-wrenching scenario is that most of the people who lost their jobs will get their jobs back. But first, it’s still going to get worse because…

The data from households was collected in April, and the questions in the survey asked people whether they were employed or unemployed in the week between April 12th through April 18th. Since then, there have been many more layoffs, and layoffs are still being announced in May on a daily basis. So the total number of unemployed are going to balloon further in May.

Whatever the final tally will be at the peak, it will be previously unimaginable. Without doubt, a large number of people will be called back. But also, many will not be called back, and that will be the unemployment crisis that households and the overall economy will have to struggle with for years to come.

But stocks surged today, and have been surging for weeks, thanks to the Fed’s Helicopter Money for Wall Street and asset holders, now amounting to $2.4 trillion in seven weeks, a gift for those that hold assets, and those that hold the most assets got the biggest gifts, while tens of millions of Americans, many of them low-paid workers with few or no assets, lost their jobs. Read…  Fed Cuts QE Helicopter Money for Wall Street Further. Still Hasn’t Bought Junk Bonds or ETFs. Was Just Jawboning

312 comments for “Collapse of the Labor Market in 5 Charts: Employment Plunged to 1999 Level. Everything’s a Gut-Wrenching Record”