Loans to “SPVs” declined to lowest since March 25. 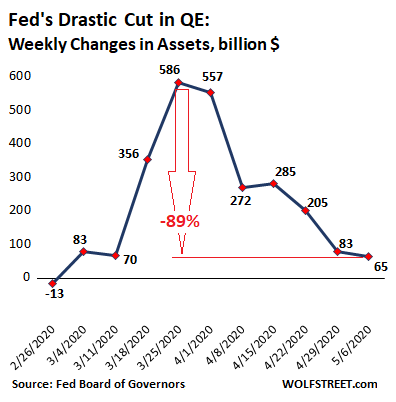 The chart below of the Fed’s total assets, now at $6.72 trillion, shows the effect of the reduced weekly QE binges: a flattening curve since peak-bailout of $586 billion in the week ended March 25: 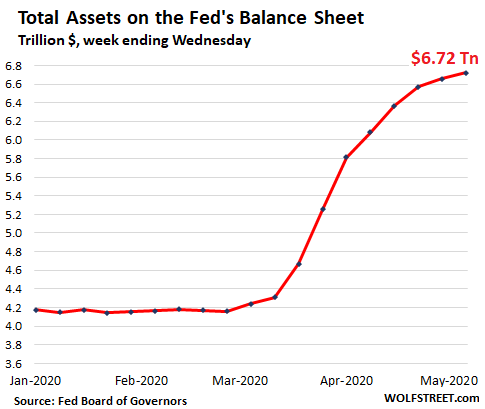 The Fed slashed its purchases of Treasury securities. Mortgage-backed securities (MBS) and commercial mortgage-backed securities (CMBS), after falling last week, remained flat. Repurchase agreements (repos) remained essentially flat. Lending to Special Purpose Vehicles (SPVs) – through which the Fed said it would buy bonds, junk bonds, bond ETFs, etc. – actually fell, as the Fed still hasn’t bought any bonds or ETFs, junk or otherwise. But foreign central bank liquidity swaps ticked up, all of the increase being with the Bank of Japan, which now accounts for half of them. 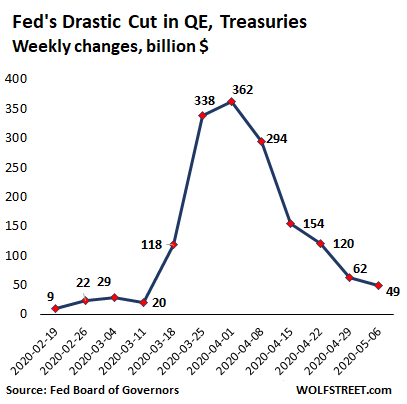 And the curve of Treasury securities has been flattening. The total is now $4.02 trillion: 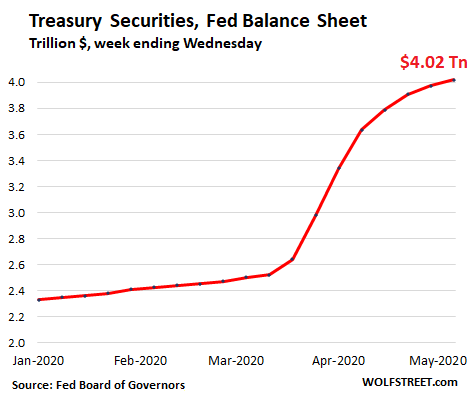 The Fed has slashed its purchases of government-backed mortgage-backed securities (“Agency MBS”) over the past six weeks (New York Fed transaction summary, net purchases, for the weeks ended):

The Fed is also buying government-backed multi-family “Agency CMBS” (mortgages for apartment buildings), but only in small amounts by Fed standards. It started doing this to bail out the CMBS market that had been thrown into turmoil when renters stopped making rent payments. According to the New York Fed, which does these operations, total CMBS purchased in the week ended May 6 was $3.4 billion. The CMBS are included in the MBS balances on the Fed’s balance sheet.

MBS trades take weeks to settle. The $30.5 billion in MBS the Fed bought this week will settle in May and June. But the Fed books MBS trades only after they settle, which causes the balance sheet to lag the actual trades.

To compensate for the pass-through principal payments and keep its MBS balance flat, the Fed would need to purchase a significant amount of MBS. If the Fed buys no MBS, the balance of MBS on its balance sheet would fall sharply.

The mix of reduced purchases, settlement dates, and pass-through principal payments caused the balance of MBS – which include CMBS – to fall by $18 billion last week and to remain flat this week, at $1.61 trillion: 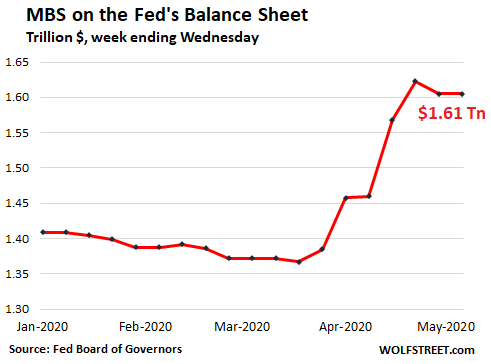 The Fed has cut in half the amount of overnight repurchase agreements (repos) it offers from $1 trillion a day to $500 billion a day; and it has cut its term repo offers similarly. There has been little demand for these repos, and the majority of what is left on the balance sheet ($173 billion) are term repos from March: 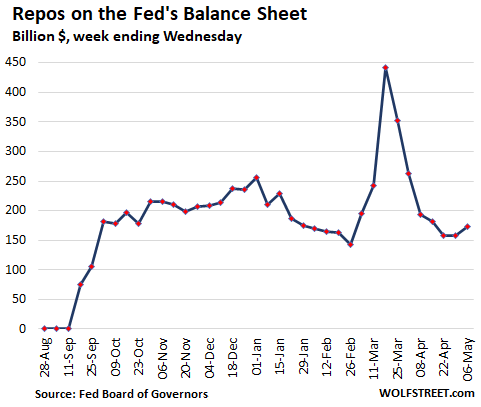 The Fed’s multi-pronged strategy to bail out every aspect of the financial markets by buying a large variety of securities is based on loans that it extends to corporate entities it has set up, the Special Purpose Vehicles (SPVs), which then buy those assets. Via this scheme, the Fed is able in broad daylight to get around the limits imposed on it by the Federal Reserve Act. Congress, which knows what the Fed is doing, nods approvingly.

But that doesn’t mean that the Fed is actually doing what it said it might, or that it is doing it to the extent that Wall Street hoped and bet on it would. Total loans to these SPVs all combined fell again, now down to $113 billion, the lowest since March 25. The chart is on the same scale as the repo chart to allow those loans to grow into it: 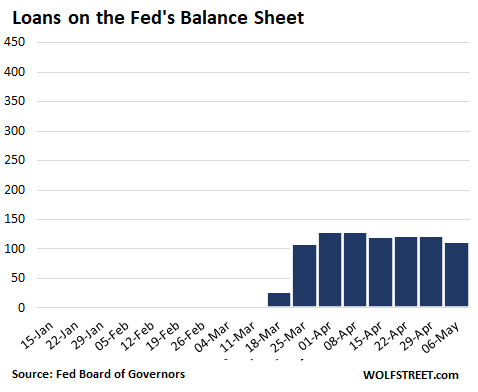 These loans by category:

Primary Credit: fell to $26.5 billion from $43 billion a month ago. This Primary Market Corporate Credit Facility (PMCCF) lends to an SPV that can buy bonds directly from companies, including certain “fallen angel” junk bonds; it can also buy portions of syndicated loans or bonds at issuance. Some of the positions have unwound, and the SPV paid the associated loans back to the Fed.

Secondary credit: $0. This Secondary Market Corporate Credit Facility (SMCCF) is designed to lend to SPVs that purchase corporate bonds, bond ETFs, and junk-bond ETFs in the secondary market. None have been purchased yet.

Primary Dealer Credit Facility: fell to $15 billion from $36 billion three weeks earlier. These are the amounts the Fed lent to primary dealers to buy securities with. After the initial burst, some of the positions have been unwound.

Paycheck Protection Program Liquidity Facility: Rose to $25 billion, up from $8 billion two weeks ago. Amount that the Fed lent to the SPV to buy from the banks the government-guaranteed loans they issued to “small businesses” under the PPP program. The primary target of this SPV was Wells Fargo, which refused to participate in the PPP program because the Fed as banking regulator had imposed limits on its assets (loans), and Wells Fargo said it was bumping into this limit. The Fed then allowed Wells Fargo and other banks to offload their PPP loans to this SPV. During the second round of the PPP, Wells Fargo has successfully obtained many loans for its customers.

The Fed’s purpose was to unfreeze the credit markets during the panic. Those markets are now steaming as investors are chasing yield. This removes the original reason for the Fed to buy those instruments. This is the effect of jawboning, and it works better than actually buying the assets – as long as the market believes it.

Central Bank Liquidity Swaps — half of them with Japan.

The Fed’s “dollar liquidity swap lines” with other central banks ticked up by $6 billion to $445 billion. All of that increase was with the Bank of Japan, which now accounts for $220 billion of the swaps, or nearly 50% of the total.

The Fed’s swaps with the central banks of Australia, Denmark, Norway, Switzerland, Singapore, South Korea, and Mexico remained at the same relatively small level. The largest counterparty in the group is the Bank of Korea, with $17 billion in swaps.

The Fed’s swap lines with the central banks of Canada, Brazil, New Zealand, and Sweden were unused. 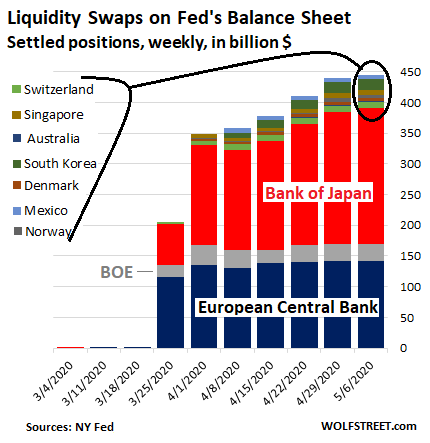 These swaps mature in either 7 days or 84 days. In essence, the Fed lends newly created dollars to another central bank and takes domestic currency as collateral, at the market exchange rate. When the swap matures, the Fed gets its dollars back, and the other central bank gets its own currency back. The balances by country are reported by the New York Fed.

Since March 11, the Fed has printed $2.41 trillion. The purpose was to inflate asset prices across the spectrum. Surely, the Fed didn’t want Warren Buffett, one of the richest people on earth, to lose his shirt, so he and his empire had to be bailed out. The Fed also wanted to restart the chase for yield that makes investors reckless and counting on another bailout when needed. This $2.41 trillion was a gift to Wall Street and asset holders – the wealthier the asset holder, the bigger the gift.

If the Fed had spread that $2.34 trillion equally over the 130 million households in the US, each household would have received $18,535. For many households, this would have been welcome help to get through the crisis. But no. This was helicopter money for Wall Street.

I’d never imagined I’d ever see this sort of spike, though in recent years I added an upward arrow with “Debt out the wazoo” to my charts, not realizing just how factually accurate this technical term would become. Read…  US National Debt Spiked by $1.5 trillion in 6 Weeks, to $25 trillion. Fed Monetized 90%