These layoffs are gut-wrenching and gigantic. But six states reported “fewer layoffs” in some industries – as there are not that many people left to lay off?

It’s a previously unimaginable and gut-wrenching magnitude: Over the past four weeks, including today’s report, 22.03 million initial unemployment claims have been processed.

In the week ended April 11, 5.245 million people filed initial unemployment claims, seasonally adjusted, the Department of Labor reported this morning, about eight times the peaks during the prior unemployment crises in 1982 and 2009. This is in addition to the 6.61 million initial claims a week ago, 6.87 million claims two weeks ago, and 3.3 million claims three weeks ago: 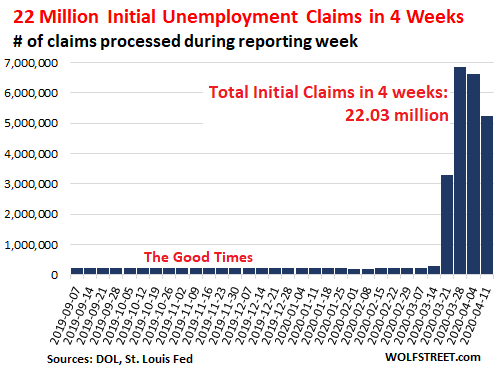 The unemployment claims reported today by the US Department of Labor are those that the state offices were able to process – not including the claims that have been filed but haven’t been processed yet.

The other day, California Governor Gavin Newsome discussed what the California Employment Development Department (EDD) is going through to catch up with the tsunami of unemployment claims, including training and transferring people from other sections to the claims department and extending call-center hours to the new schedule of 8 a.m. to 8 p.m. seven days a week. He said that the EDD can now process about 1 million claims a week, and that, at the time he was speaking, it had already processed about 2.7 million claims since the lockdown started.

Other state unemployment offices have jumped through similar hoops and ramped up staffing to catch up with processing the historic onslaught of claims. And they’re making headway. What we’re seeing here are only the claims that have been processed – not the unprocessed claims that have been filed and are still waiting in the queue or require additional work.

The 10 states with the most initial claims this week.

The table below shows the 10 states that had the most initial claims for unemployment insurance in the week ended April 11:

Some of the states provided comments about the industries that the layoffs were concentrated in. Notably absent are the industries of finance and insurance – the biggest industry in the US. Also, industries where work-at-home is possible are largely absent; and only one state, Michigan, listed layoffs in “professional, scientific, and technical services.”

Six states where layoffs declined – California, New York, Florida, Pennsylvania, North Carolina, and Missouri – listed in the comments the industries that had “fewer layoffs” than in the prior week. These industries may be getting closer to completing the initial wave of layoffs. And in some of the industries such as restaurants and accommodation, there may not be a lot of people left to lay off. These industries include:

A person who has filed an “initial claim” for Unemployment Insurance (UI) and still doesn’t have a job a week later is added to “insured unemployment.”

The number of the “insured unemployed” skyrocketed to 11.98 million, by far the highest in the history of the data series. The prior record had been set a week ago at 7.45 million. The previous high was 6.63 million in May of 2009.

It looks like the tsunami of new layoffs is still huge but not quite as huge as it was a week ago, and it looks like states are making progress in catching up with processing unemployment claims after the catastrophic first three weeks. Estimates that the total number of initial unemployment claims during the lockdown would reach a gut-wrenching 25+ million appear to have been on target and will likely be reached in a week or two.

The second half of March was the end of retail for many retailers, while others had spiking sales. Brick & mortar department stores will never recover; they were toast before the lockdowns. Read… Here’s Where Retail Sales Spiked and Collapsed in 11 Mind-Blowing Charts of Lockdown Land

196 comments for “Week Four of the U.S. Labor Market Collapse”