“In May, what market? I don’t see no market”: Realtor.

The “combined COVID-19 and oil shock” are going to do a number on the U.S. housing market, Fannie Mae warned in its monthly report on Wednesday. Actual data for homes sold after the lockdowns began will not be available for a while, and everyone is grappling with preliminary indications of just how ugly this is going to get.

A survey conducted by the National Association of Realtors in the first week of April, cited by Fannie Mae, showed that 90% of the responding Realtors reported declining buyer interest, with half of them reporting declines of over 50%.

Contract signings in early April plunged by about 35% to 40% from a year ago, Fannie Mae estimated, based on Google Trends data.

Existing home sales will plunge 34% in the second quarter, to an annualized rate of 3.76 million homes, it said, “a sales pace similar to the lowest quarters of the Great Recession.”

And as bad as these sales are, it said that the numbers will be inflated by the April data of closed sales that were deals signed in March and February, before the lockdowns. This inflated sales data from February and March would give “modest support” to second quarter sales.

But going forward, it is “likely that monthly sales will decline to an even lower annualized pace, in part as evidenced by the decline in the HPSI.” And this – given the delay between signings and closings – would “lead to a drag on third quarter home sales, even as economic activity is expected to begin gradually accelerating.”

And total sales of existing homes for 2020 overall, despite its “projection for strong sales” in the fourth quarter, would still drop by 15%, it said.

New home sales will drop 40% in the second quarter, rebound some in the third quarter, and for the year overall drop 12%, it said.

The boots-on-the-ground warnings are starker.

Thomas Stone, a Realtor in San Francisco Bay Area’s Sonoma County, told WOLF STREET what he is seeing, given the lockdown and the new social-distancing rules governing the process of home sales.

“In person showings are only allowed if virtual tours are unavailable, the home must be vacant, and they are by appointment only. Two people at a time, max,” he said.

“More than 200 homes have been pulled off the market, and new listings so far in April are down 75% year-over-year,” he said. Potential buyers are unmotivated and leery. And they’re facing, or are already tangled up in, the largest unemployment crisis in US history.

“We still have homes that went into escrow before the lockdown, and a lot of those buyers are getting cold feet,” he said.

“The March sales numbers do not reflect the lockdown’s effects,” he said. “April will be very bad. And May? What Market? I don’t see no market.”

Given the importance of tourism in Sonoma County (Wine Country), vacation rentals are a big thing. But tourism is dead – even local tourism. And he warned: “The folks who paid a premium for [home-sharing service] VRBO-suitable homes are going to be hurting, as will everyone who bought in the last two years.”

“We are going to see the fastest and hardest price correction ever in Sonoma County history,” Realtor Thomas Stone told WOLF STREET.

The more we grapple with early data, the worse it gets.

Mortgage applications to purchase a home in the US during the week ended April 10 plunged by 35% from a year ago, and by 42% from the peak in January, the Mortgage Bankers Association reported on Wednesday. It was the fourth week in a row of year-over-year plunges: 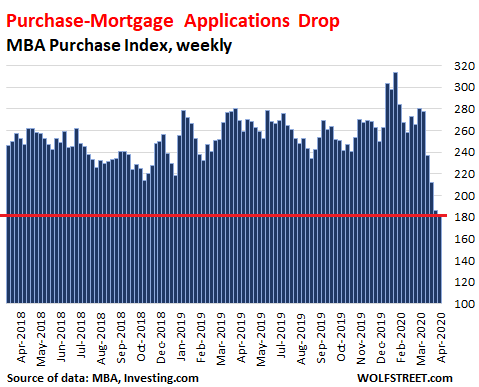 California, New York, and Washington are the states where lockdowns started first, and the metros in these states are also among the most expensive housing markets in the US and are therefore the most severely impacted by the current plunge in availability of jumbo mortgages. And so, the year-over-year plunges in purchase-mortgage applications were far steeper than US average of -35%.

For the survey week ended April 10, purchase mortgage applications in California plunged by 49%, in Washington by 53%, and in New York by 58%. This chart shows the progression over the past four weeks for each of the three states: 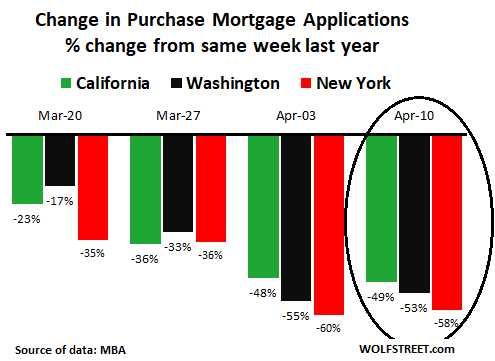 Who is still buying?

Purchase mortgage applications are an early indication of demand by potential home buyers.

Demand by nonresident foreign investors – who either come in with their own cash or finance overseas – is not reflected in purchase mortgage applications; and those investors have been locked out, and demand by them has collapsed.

Demand by large domestic investors that fund their purchases at the institutional level, such as REITs, is also not reflected in purchase mortgage applications. But these investors are now struggling with a liquidity crisis and have other things to worry about.

But refis are red-hot. 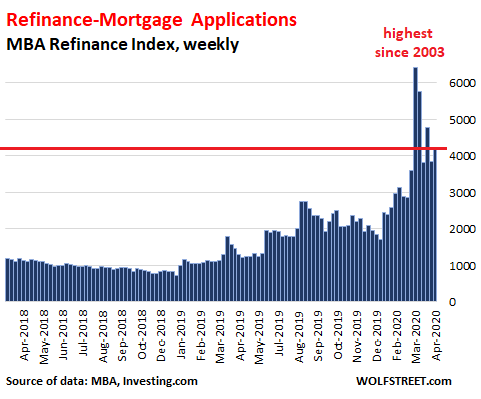 The MBA obtains this data via weekly surveys of banks, nonbanks, and thrifts that cover 75% of all residential mortgage applications.

167 comments for “How Will Covid-19 Lockdowns Hit the Housing Market? It Gets a Little Clearer”