Trading of Luckin shares now halted. Wall Street banks, which get big-fat fees, are all too happy to sell this stuff to the American public.

Luckin Coffee is a Chinese coffee chain, founded in 2017, that had sold American Depositary Shares (ADS) to the US public in an IPO in May 2019, thereby extracting $561 million from US investors. Each of those ADS represents eight actual shares. At the peak, on January 17, the market capitalization of the Luckin American Depositary Receipt (ADR) exceeded $12.6 billion. Then it went downhill, and last week, the price collapsed entirely, and this week, on Monday, shares fell another 18%, having now collapsed 91% from the peak in January. And this morning, trading was halted, pending news (update: as 5:45 p.m. Eastern Time, there is still no discernible news, and trading remains halted): 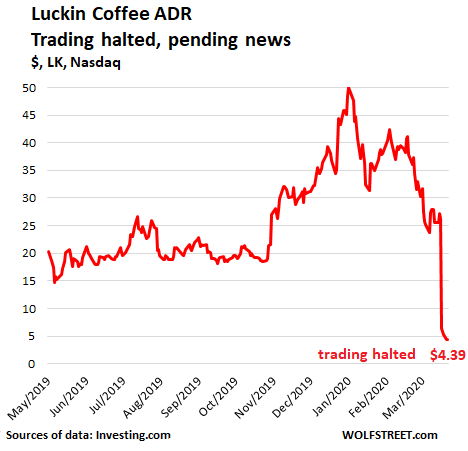 The big 82% single-day plunge was on April 2 when the company finally admitted that it had fabricated $310 million (RMB2.2 billion) in revenues for 2019, thereby inflating its revenues to a fake $732 million. It said that “beginning in the second quarter of 2019, Mr. Jian Liu, the chief operating officer and a director of the Company, and several employees reporting to him, had engaged in certain misconduct, including fabricating certain transactions.” Of course, Q2 2019 was the period of the IPO, and it was important to pump up the share price.

Allegations of revenue fakery had been floating around since February, and the shares [LK] had taken a beating already, though Luckin had denied those allegations vehemently until last week.

Yesterday, the Luckin ADS collapsed further, even as the rest of the market soared, after Goldman Sachs told clients in a note, reported by Reuters, that the company’s Chairman Charles Zhengyao Lu and CEO Jenny Zhiya Qian had surrendered their shares – the actual shares, not the ADS – to a group of lenders, including Goldman Sachs, after another entity controlled by Lu’s family had defaulted on a $518 million margin loan issued by that group of lenders.

Goldman, which is acting as a “disposal agent,” is now proposing a sale of at least some of those shares. The $518 million margin loan was secured by 515.4 million class B shares and 95.5 million class A shares of Luckin. This includes shares pledged by the family trust of Qian. According to the note, the class B shares would be converted into ADSs and sold as such.

In terms of votes, Goldman said that if the share sale goes through, Chairman Lu’s voting interest in Luckin would not decrease, while CEO Qian’s beneficial and voting interests would fall significantly, though Goldman did not quantify it further.

And there is a sideshow here: Chairman Lu is also the largest holder of Chinese car service provider Ucar, with a 10% stake. Trading in Ucar shares, which are listed China’s New Third Board equity market, were halted on Monday. The company said they would resume trading no later than May 6. This followed the revelation that the National Equities Exchange and Quotations (NEEQ), which operates the New Third Board, had asked Ucar to explain the impact on Ucar of the fraud probe at Luckin.

OK, a Chinese company lists on a US stock exchange and via the IPO extracts hundreds of millions of dollars from US investors, including institutional investors befuddled with Chinese miracle companies, and then, it fakes its revenues. Short-sellers start sniffing around and make announcements, which the company vehemently denies. Shares head lower. And when it finally has to admit to the fakery, shares collapse.

This is like the oldest game on Wall Street. And Wall Street investment banks that underwrite the IPO don’t really care because they already extracted their fees. Now some Wall Street lenders are stuck with a loan that is backed by collapsed shares as collateral. And our thoughts go out to them.

Here is another shining Chinese company traded in Hong Kong. Despite my assurances that “Nothing Goes to Heck in a Straight Line,” it did. Read... Chinese Stock Collapses 98% in Hours After MSCI Flip-Flops: How Index Providers Saddle US Pension Funds with Stock Scams

127 comments for “Another U.S. IPO of a Chinese Company Goes Bust in 11 Months”