Despite my assurances that “Nothing Goes to Heck in a Straight Line,” a Chinese stock just did.

I’m infamous for saying that “Nothing Goes to Heck in a Straight Line.” This piece of immortal wisdom even made it onto our official beer and iced-tea mugs. But today, I was proven wrong. A Chinese stock just went to heck in a straight line.

ArtGo Holdings, a Chinese company that mainly quarries marble and processes it into blocks and polished slab and that has recently been trying to expand into Chinese real estate with funds raised by issuing more shares, is now infamous because its shares, traded in Hong Kong since 2013, became this year one of the best-performing stocks in the world, with a 3,800% surge, from 0.38 Hong Kong dollars on January 2, 2019, to HK$14.8 at the close on Wednesday, giving it a market capitalization of HK$45 billion ($5.6 billion). And today the stock collapsed by 98% (red line to heck) to HK$0.30 before trading was halted a tad too late: 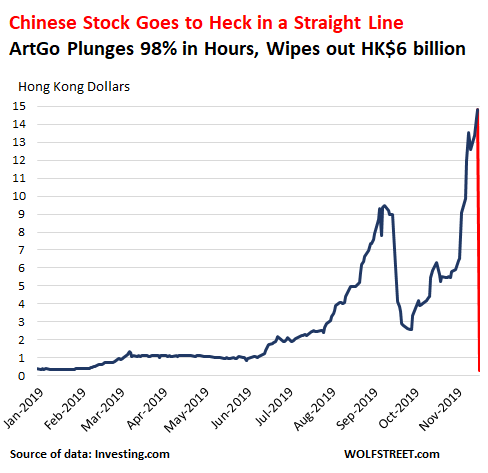 The surge of the stock from near nothing to $5.6 billion came as two top index providers – FTSE Russell and MSCI – decided to include the stock in their indices. And the collapse came when MSCI backtracked last night.

On November 7, MSCI announced that it would include ArgGo into its benchmark indices affective November 27. Yesterday evening, MSCI U-turned and  announced these crushing words:

Following further analysis and feedback from market participants on investability, contrary to what was announced on November 7, 2019, MSCI will not add ArtGo Holdings to the MSCI Indexes as part of the November 2019 Semi-Annual Index Review.

MSCI will continue monitoring ArtGo Holdings. The security will not be added to the MSCI Indexes until further notice.

Even rumors of an inclusion into the benchmark indices by MSCI or other index providers can drive up share prices, particularly of these types of tiny Chinese stocks because funds that track these indices – including funds in the US Federal Employees Retirement System and other public and private US pension funds – end up having to buy the shares in order to track the benchmark indices.

Speculators front-run the inclusion of stocks into benchmark indices. This front-running drives up the share price and market capitalization. When the index provider then makes the announcement of a coming inclusion, funds that track that index start buying. Many indices use market capitalization as a criterion for inclusion, and the more this market cap gets driven up, the more indices include the shares, which drives up market cap even further. It creates a stock built on vapor.

These frontrunning speculators and funds that tried to get in early got wiped out today with their ArtGo bet.

That big first spike in share price from June through mid-September occurred in the run-up to ArtGo being included in the FTSE Global Equity Index Series China Index by FTSE Russell, effective September 20.

This shows just how much of a scam the inclusion of a tiny stock like this by China-befuddled indices can be.

Alas, on October 3, the shares began to skyrocket again, this time on rumors that MSCI would include them in its indices. The confirmation from MSCI came on November 7. From October 3 through November 20, the shares skyrocketed 480%. And today, well, they went to heck in a straight line.

This shows the impact that these index providers have on stock market bubbles, and specific stock bubbles, no matter how idiotic. They promote this idiocy based on the principle that market cap begets more market cap — even if revenues collapse, as they did in ArtGo’s case. And when it all blows up, it’s the beleaguered pension funds and their beneficiaries that eat dust. It’s a good thing that MSCI U-turned on its decision. But it’s not a good thing that these index providers keep getting bamboozled by the lure of ridiculously inflated market cap.

99 comments for “Chinese Stock Collapses 98% in Hours After MSCI Flip-Flops: How Index Providers Saddle US Pension Funds with Stock Scams”