IPO investors tried to unload while they could.

Lyft started trading today as a public company. It had lost $911 million last year. Investors have been subsidizing every ride. Outside of burning the money that its investors have handed it, Lyft does not seem to have a sustainable business model. To reduce the burn rate, it has cut the pay of its drivers. And hundreds of those drivers were protesting and went on strike today in Los Angeles, San Diego, and San Francisco to draw attention to their pay.

On Thursday, Lyft priced the IPO offering shares at $72 and sold 32.5 million shares at this price to IPO investors, which raised about $2.3 billion in new money from those investors. Now Lyft has more cash that it can  burn.

But this morning, it took hours to get everything lined up. Trading in Lyft shares finally opened a few minutes before noon because that’s how long it took to manipulate the levers to create that “pop” at the start that would make all the headlines within minutes of the “pop.”

And sure enough, minutes later, headlines like “Lyft pops 20% in trading debut…” started making the rounds. That’s all that really mattered. And that’s all anyone remembered.

That “pop” is the amount that shares opened over the already over-inflated IPO offering price of $72 a share, established on Thursday. And so the opening price today of $87.24 represented a beautiful 21% pop for those IPO investors if they could have gotten out at that price. And some were able to.

This pop gave Lyft a market cap of about $30 billion for just one minute, just before high noon, so to speak. And that was as far as the hype managed to drive these shares. And then the selling by those IPO investors started. It was relentless – despite the hype among retail investors to get in on the ground floor of the next miracle. Four hours later, shares closed at $78.29, down 10.3% from the first trade, with the sell-off speeding up at the end of the day (stock price data via YCharts): 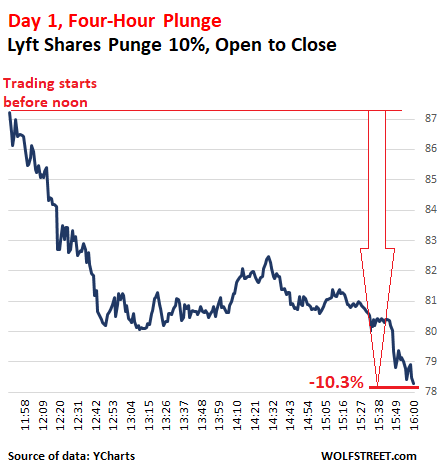 There is no telling how this crazy stock will do in a world where making money is uncouth for these companies, and where burning investors’ cash year after year in huge quantities is a perfectly noble business model even for companies that have been around for years and have thousands of employees and billions in revenues.

And these cash-burn business models are rewarded with ludicrously huge valuations that have been surgically removed from all reality. Each of these companies comes up with its own home-made metrics that it tells fawning analysts to watch, to distract from irrelevant details such as “net losses.” And as long as these home-made metrics show an upward trend, regardless of how much money the company loses, it is a raging success in the eyes of those analysts. Historically, this works until it suddenly doesn’t.

The financial world has gone nuts. Read…  How Can a Company with $1.8 Billion in Revenue Lose $1.9 Billion? WeWork Shows How