Painful moment of truth for banks & investors. “Uncertainty over the accuracy of the companies’ books and disclosure of pertinent information”: Fitch Ratings.

Defaults by Chinese companies on bonds they issued in China (“onshore” bonds, as opposed to “offshore” bonds) soared to a record in 2018, according to a report by Fitch Ratings:

The idea that the government would actually allow companies to default on their bank loans and bonds – rather than just bailing them out or pushing the state-owned banks to convert defaulted loans into equity and forget about them – is still a somewhat sobering concept.

Back in the good old days of 2014, there had been zero SOEs and only a handful of non-SOEs that were allowed to default. But the tolerance at government levels for corporate defaults, even by SOEs, has risen.

Nevertheless, the Chinese credit agencies are an exuberant bunch: 37.7% of the rated Chinese bond issuers at the end of 2018 were rated AA+ or higher, up from around 32.7% a year earlier. Bonds rated AA+ and higher account for 62.6% of the amount of corporate bonds outstanding, up from 59.5% a year ago.

There are practically no companies rated A+ or below, and no junk-rated companies, though there are some “unrated” bond issuers, according to Chinese credit rating agencies. The chart below shows that there is very little credit risk in Chinese onshore corporate bonds, that they’re all just pristine, and that just about none will default anytime soon, according to Chinese credit ratings agencies (chart from the report by Fitch Ratings): 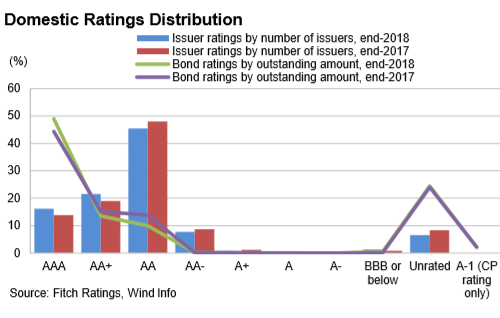 The above chart is the opposite of US corporate credit ratings, where there are only two companies with AAA ratings — Microsoft and Johnson & Johnson — and a smallish number with AA ratings, while the vast majority of companies are rated BBB or below, all the way to single-C.

Even the ratings of US companies may be way too lenient, but it’s far more realistic than the fiction proffered by Chinese ratings outfits about their Chinese client companies. So investors beware! But the problems in China are far deeper than just ludicrously fake credit ratings.

Companies have big piles of cash listed on their balance sheet. But when push comes to shove, that cash doesn’t always exist. Fitch Ratings, in a separate report, named three of those companies that in recent months had “defaulted on moderate amounts relative to their reported cash holdings.”

They had substantially more unrestricted cash listed on their balance sheet just before the default than the amount of debt that they defaulted on. They should have easily been able to service their debt by using their “cash.” But no. Yet, their financial statements had been audited by Chinese audit firms. Fitch Ratings:

Three defaults in recent months have highlighted the risk of broader disclosure and governance problems among Chinese corporates, as well as the variable quality of local auditing.

Shandong SNTON Group Co. (Snton) reported a cash balance of 4 billion yuan at the end of June 2018. But on September 25, it was sued by the Hebei Bank Qingdao Branch for 139 million yuan drawn on two bank loans it had defaulted on. Despite the big-fat amount in cash listed on its balance sheet, it didn’t have the cash to service relatively small bank loans.

Even if half of its 4 billion yuan in cash was “restricted,” and could not be used to pay off an existing debt, as Fitch estimates, that still leaves 2 billion yuan to pay off a 139 million bank loan.

The company also raised 400 million yuan with a domestic bond offering in the first half of 2018, Fitch said, “suggesting normal access to the domestic funding market, despite generally tight credit conditions.”

Reward Science and Technology Industry Group Co. (Reward) reported 4.2 billion yuan in cash on its balance sheet at the end of September 2018. But on December 6, it defaulted on just 300 million yuan of commercial paper.

Of that 4.2 billion yuan in cash reported on its balance sheet, only a 548-million-yuan portion was restricted. The remaining 3.6 billion yuan should have been available to easily pay off 300 million yuan in commercial paper. But no.

Kangde Xin Composite Material Group Co. (KDX) reported a whopping 15 billion yuan in available cash at the end of September 2018, but on January 15, 2019, it defaulted on 1 billion yuan of commercial paper.

“Reward and KDX confirmed to Fitch shortly before their commercial paper due dates that their holdings of realisable cash were sufficient to meet obligations,” Fitch said. But that’s not how it turned out.

“These companies did not show other typical signs of distress prior to the defaults,” Fitch notes. In other words, big cash balances, no worries, and suddenly a default out of the blue, because the cash that was supposed to be there suddenly didn’t seem to be there:

The defaults call into question the actual availability and amounts of reported cash balances. The three companies reported their restricted cash balances in line with Chinese accounting standards – China GAAP – which mandate similar disclosures on cash encumbrances to international standards.

Uncertainty over the accuracy of the companies’ books and disclosure of pertinent information is ultimately related to governance and accounting quality.

Governance issues – often challenging to uncover – have been a factor in Fitch’s ratings on Reward and KDX.

Reward’s ratings have been constrained by its low transparency as a private unlisted company with concentrated share ownership. The company changed auditor and re-issued its 2017 accounts due to disclosure and accounting problems flagged by the regulator.

KDX is listed on the Shenzhen Stock Exchange (SSE), but an apparent problem with its disclosure of concerted party arrangements at shareholder level prompted an SSE investigation, which hampered access to funding and prompted our downgrade in December.

Chinese companies were able to sell about $1.2 trillion of new bonds in 2018. Of those, 7.4 trillion yuan ($1.1 trillion) were onshore bonds, and $109 billion were “offshore” bonds, according to Fitch Ratings. But yields are gradually rising, and spreads to Chinese government bonds are widening, as investors become a tad more circumspect while they begin to grapple with the novel idea that the government would actually allow companies default.

Auto sales plunged in China over the past four months. What’s particularly disconcerting is the sharp deterioration at the end of the year in other markets, not just China. Each market has its own problems, but they’re sure coming together at an awkward moment. And this isn’t even a global recession yet... THE WOLF STREET REPORT