Economic powerhouse Texas first got hit by the Oil Bust then by the Coronavirus. Expect similar confluence of unrelated factors in other regions.

Most of the economic data is released weeks and months after the fact. But surveys of manufacturing and service companies foreshadow what will happen with the official data when it finally appears.

The Texas manufacturing production index, for which data was collected between March 17 to 25 from 110 Texas-based unnamed manufacturers, plunged from +16.4 in February to -35.3 in March, the largest month-to-month drop in the history of the index going back to 2004, the Dallas Fed reported this morning: 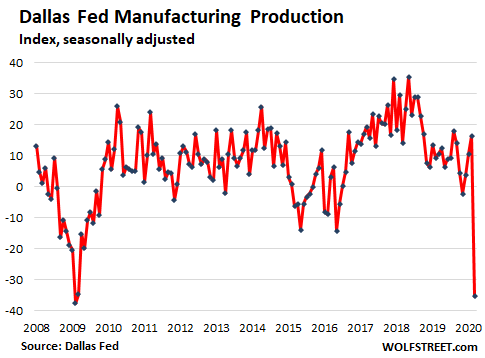 Many manufactures in Texas supply the oil and gas industry, where mayhem had broken out long before the coronavirus lockdowns started impacting the economy. 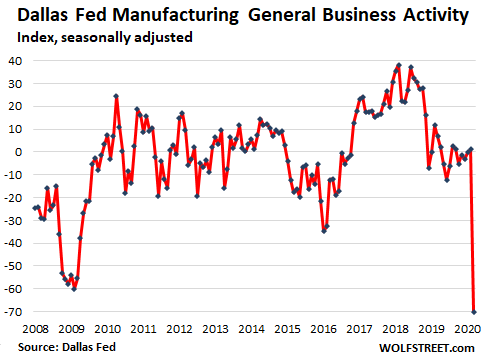 The price of crude-oil grade West Texas Intermediate (WTI) has now plunged into the range of $20 per barrel, which is catastrophic for the entire oil and gas sector. This is down from a range of $80 to $110 per barrel from 2010 through mid-2014. In an effort to stay alive a little longer, exploration-and-production companies and oil-field services companies are cutting operations, and as they’re running out of funds, they are slashing orders for equipment and supplies. And this ripples through the Texas economy.

The comments made by the executives in the survey ranged from:

“We are mostly just concerned.”

…to something more apocalyptic:

“If we see this downward trend continue, we will run out of cash within four months. New orders and inquiries have stopped instantly. Our work in-house will be finished mid to end of April, with no new orders coming in, all due to this real or imagined shutdown. I believe the country will be in a depression by the fall unless the work environment changes dramatically.”

The index for new orders collapsed from +8.4 to -41.3, the lowest since March 2009 during Financial Crisis 1. One of the executives explained it in the comments: “The business disruption due to COVID-19 is causing cancellations and holds from a majority of large customers. We are looking at the possibility of heavy losses for the coming months until the national health emergency stabilizes.” 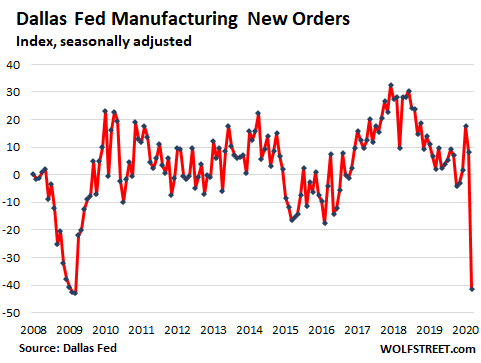 This is starting to have an impact on employment: As 26% of the companies in the survey reported net layoffs in March (only 3% reported net hiring), the Employment index plunged to -23 from the already beaten-down near-zero reading in February.

One of the executives explained it in the comments this way: “The coronavirus impact primarily will hit contractor populations in the short term. Longer term, it will hit company employees.” 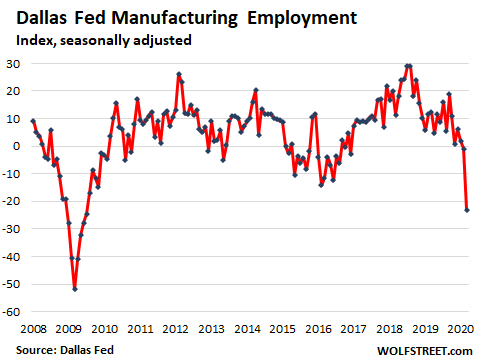 These types of surveys (which include the PMIs) are among the early indicators as to what companies are up against. And what they’re up against is that the health crisis now reverberating through the economy came on top of numerous other issues.

On top of these other issues is the record indebtedness of US businesses that made them more vulnerable and more fragile even under a regular mild run-of-mill business-cycle downturn.

Then came Oil Bust 2, which started in late 2018, just as the industry thought it was already recovering from Oil Bust 1, which had started in mid-2014. In early March 2020 came the Saudi-Russian price war that directly attacked the US shale oil space.

Texas is an economic power-house. And the oil-and-gas industry is a huge customer of manufactured goods and equipment, including tech equipment; it powers construction from high rises to pipelines; it drives numerous services, from technology services to transportation services, such as trucking.

Other economic power-house regions in the US also already struggled with different economic factors in 2019 – such as the deflation of the unicorn-startup bubble in San Francisco and Silicon Valley. And now on top of it all, there’s the COVID-19 health crisis, the shutdowns and the mindboggling uncertainties that come with it. And the early data shows just how tough this is going to be.

And this is just the first inkling of what’s in store for home sales. Read…  How Will Coronavirus Lockdowns Impact the US Housing Market? First Data Points Are Out. They’re Ugly

124 comments for “How Will COVID-19 Impact US Manufacturing? First Indications Are Ugly. Exacerbated by Underlying Conditions”