And it’s just the first inkling of what’s in store for home sales.

Most of the housing market data that we’re going to see over the next month or two – such as median price indices and sales volume indices — or four-plus months for the Case-Shiller Index – will reflect the era before the Covid-19 fallout. But on Tuesday last week, March 19, the real-estate world changed brutally. The five-county San Francisco Bay Area went into lockdown, followed in some form or other by the states of California, New York, New Jersey, Illinois, Indiana, Florida, Louisiana, and many others, each in its own way, more or less stringent.

Today, about one-third of the US population is under some kind of lockdown directive. And even in places where there are no official lockdowns, more and more people have started to practice some sort of “social distancing.”

Mortgage applications to purchase a home plunged in states where lockdowns went into effect, the Mortgage Bankers Association reported today. And those lockdowns aren’t even fully reflected yet as they went into effect during the last part of that reporting week, ended March 20, or just after the reporting week, and what you see here is the prelude. This is the drop from the prior week, seasonally adjusted:

Across the US, purchase mortgage applications dropped 15% in the week ended March 20, from the prior week, the MBA reported. And this is just the first few days into the lockdowns: 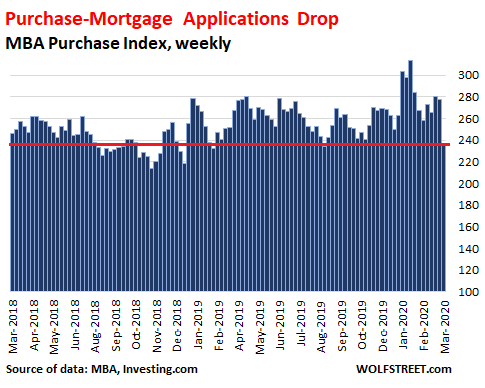 During the same week, ended March 20, the average 30-year fixed mortgage rate was 3.82%, according to the MBA. This was up sharply from the record low two weeks earlier due to the turmoil in the mortgage-backed securities market that caused four mortgage REITs to collapse this week. But it was still much lower than the 5% mortgage rates in late 2018.

Given “the widespread economic disruption and uncertainty over household employment and incomes,” the MBA’s report said, “potential homebuyers might continue to hold off on buying until there is a slowdown in the spread of the coronavirus and more clarity on the economic outlook.”

Mortgage applications to refinance existing mortgages (refis) went through spectacular gyrations. As mortgage rates plunged to historic lows a few weeks ago, refis spiked to the highest level since 2003, having multiplied sixfold from a year earlier.

Then two things happened: Mortgage rates snapped back as all heck broke loose in the MBS market, and the coronavirus threw uncertainty over everything. Refis in the reporting week, ended March 20, plunged 34% from the prior week and 41% from the phenomenal spike two weeks ago: 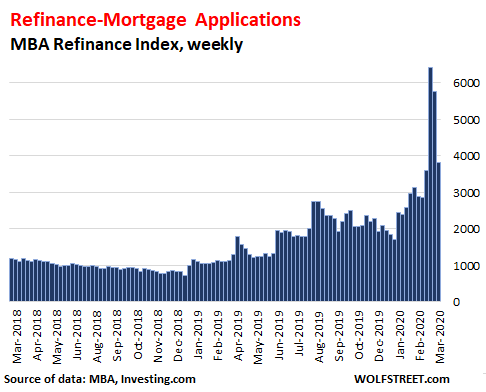 This data is based on a weekly survey by the MBA that covers over 75% of all US retail residential mortgage applications at nonbanks, banks, and thrifts.

Purchase mortgage applications are not a great indicator of home sales because a portion of buyers, including investors, buy homes without obtaining a mortgage. Large investors pay cash and borrow at the institutional level. Foreign nonresident investors often pay cash as a way to get money out of the country. If foreign buyers borrow, they may do so offshore. Also, some people who’re tired of earning nothing on their money while paying interest on a mortgage are paying cash.

But purchase mortgage applications are a gauge of local demand by regular folks. That demand had been strong, and is now collapsing under the lockdowns.

Over the next few weeks, more states and cities will impose lockdowns. And demand for purchase mortgages will hit horridly low levels: It is difficult to shop for a home in areas under lockdown, and home sellers are reluctant to show homes to people who are potentially infected. There will be some activity, sure, including via online platforms, such as open-house videos. But much of the activity will come to a halt. And mortgage applications will be early data points that document this trend.

223 comments for “How Will Coronavirus Lockdowns Impact the US Housing Market? First Data Points Are Out. They’re Ugly”