This morning, the US Dept. of Labor announced that 3.283 million people had filed initial unemployment claims in the week ended March 21. We were warned yesterday that today’s initial claims would be horrid. In his press conference yesterday concerning the coronavirus, California Governor Gavin Newsom said that California by itself had “just passed the 1 million mark” in unemployment claims since March 13 — and this might include claims to be reflected in the next reporting week.

And it’s going to get worse. The five largest counties of the San Francisco Bay Area were the first major region in the US to go into lockdown on March 17. The State of California followed on March 20, toward the end of the unemployment-claims reporting week (through March 21), and many other states followed within days – and many of those claims were filed after this reporting week had ended.

This is the mind-blowing effect what started to happen in the week ended March 21: 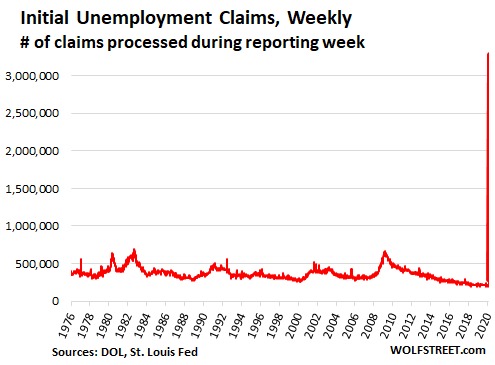 The report by the Department of Labor this morning listed some sectors that were particularly hard hit by “COVID-19 virus impacts”:

However, this horrid spike in claims only shows a partial picture.

Since the end of that reporting week, lockdowns have spread to many other states, and companies in those states are now struggling with how to cope. Many companies had already laid off people before the lockdowns – and this is reflected in today’s unemployment claims. But much of the fallout from those lockdowns and their secondary effects will be reflected in future reports.

The gig economy, as the US economy has been called due to the growth of business models that shift labor from employees to contract workers, is unprepared for this. Under current rules, gig workers cannot file for unemployment claims – though the stimulus package will change this. And for now, they have not filed for unemployment claims. But their hours of many have been cut, and others lost their gigs entirely.

This includes musicians whose gigs were eliminated when bars, restaurants, and clubs shut down. It includers actors and singers and artists. It includes Uber and Lyft drivers whose business has dwindled. It includes self-employed vacation-rental entrepreneurs with some units on Airbnb that no one is booking because the travel industry has shut down. It includes tech workers whose projects have been put on hold. It includes instructors and coaches of all kinds – such as figure skating coaches, language coaches, and corporate coaches. And so on. Many millions of people.

Those who are self-employed and the rug suddenly got pulled out from under them could not file for unemployment, and they’re not included in these unemployment claims.

But these gig workers, freelancers, and the self-employed may find new help: Under provisions in the stimulus bill, some of them (not all) may become eligible to file for unemployment compensation. If this comes to pass, it will be a form of life-support for those that qualify, and it will produce an additional tsunami of unemployment claims over the next few weeks.

Then there is this: this unprecedented and sudden explosion of unemployment claims caused a number of state websites for unemployment claims to crash intermittently, delaying the claims. The difficulties people had getting through the system at the end of the reporting week likely pushed a number of claims into the next reporting week. States that had intermittent crashes of their sites reportedly included New York, Oregon, Colorado, Kentucky, and other states.

The stimulus plan in Congress and various efforts by states and municipalities have provisions that would encourage and pay companies to not lay off their employees if the company is under lockdown. If a company, such as a restaurant or a manufacturer retains its employees or hires them back, it would pull these people off the unemployment rolls and back into the universe of the “employed” – even though they’re not working.

The details of these programs will become clearer over the next few days, and it will be interesting to see how many companies follow through in not laying off people or hiring them back.

A side effect is that there will be many ways for companies to game these programs as the rules are being cobbled together at breakneck speed, under heavy influence of lobbyists, and smart folks are already trying to figure out how companies can benefit from it without retaining those jobs.

Nevertheless, and despite the gaming to be expected, those efforts will be immensely welcome by companies and will soothe the pain of some of the employees, and if and when eligible, of gig workers, freelancers, and the self-employed.

Here is the first inkling of what’s in store for home sales. Read…  How Will Coronavirus Lockdowns Impact the US Housing Market? First Data Points Are Out. They’re Ugly