All eyes are on China to see how air transport will change in the aftermath of the crisis.

Airbus CEO Guillaume Fleury and CFO Dominik Adam issued a joint statement on March 23, regarding the European aerospace giant’s plan to power through the Covid-19 crisis. These new provisions include a new €15 billion credit facility, cancelling the proposed €1.80 per share dividend, and “cutting operational costs where possible.”

This gave Airbus €30 billion in liquidity to burn through. While Messrs. Fleury and Adam seem confident Airbus will not need a government bailout, they stressed the rest of the environment will need as much help as possible to get through the crisis.

This “environment” includes dozens of airlines who are now asking Airbus to “defer” deliveries. While Chinese airlines have started accepting new aircraft once again and the Airbus assembly line in Tianjin is already back at full at full capacity, the rest of the world is not in such good shape. Mr. Fleury in particular warned that while “recovery has already started in China” “it’s difficult to assess where the low point will be.”

For the moment Airbus production is unaffected: The main facilities at Toulouse re-opened on Monday, as did all the Spanish operations. The helicopter assembly plants (formerly Eurocopter) near Marseille and Augsburg are both operating at full capacity, and even in the “worst case scenario,” their maintenance facilities will remain operative to ensure emergency services can still operate at full capacity.

This means that Airbus’ galaxy of vendors and contractors has been so far mostly unaffected, but it’s pretty obvious that at some point production will be reduced or even idled as undelivered aircraft fill up all available space.

Key vendors, such as Mecachrome of France, have invested heavily over the past five years to help Airbus increase their production to meet the flood of new orders, chiefly from Asia. For example, starting last Summer, production of the best-selling A320 narrowbody increased to 60 units per month, a tremendous achievement. Production was to be further increased to 63 aircraft in 2021 and 65 in 2023.

One of the bottlenecks is caused by the engines, specifically hard and expensive to manufacture components such as turbine blades and shafts that can ensure the level of performance and reliability airlines require. A single turbine blade used in the first stage of a CFM-56 (a common engine used by many airliners such as the Boeing 737NG) cost the aircraft owner about $8,000, and according to the specific engine model there are between 22 and 44 of them.

While this may sound ridiculously expensive, one needs to remember turbine blades need to operate at prohibitive temperatures (at 35,000 feet, average air temperature is -51°C while combusted gases have temperatures running well north of 1,500°C), with shaft speeds of over 10,000 rpm (here is a discussion of some of the issues of turbine blades), and with maximum reliability.

The facilities, foundries, and equipment to manufacture turbine blades to these exacting standards are expensive. If aircraft production stops, engine production stops as well, and with it the need for components. This means zero cashflow to service the loans with which this plant was funded and cover other expenses.

I suspect this highly alarming prospect is what convinced the French and Spanish governments to greenlight the restart of production at Airbus facilities and at their vendors albeit with many precautions in place, as it should be.

But what about the aircraft already in service? Airlines have grown to dislike the Airbus A380 due to lack of flexibility, high fixed costs, and the difficulties of filling it to capacity. Some of the highest-hour hulls were already being withdrawn from service and scrapped last year after Airbus announced the end of production.

The present crisis will most likely accelerate the A380 demise. Airlines such as Air France never really took to the type, and it’s likely that only a small portion of their A380 fleets will emerge from storage.

Now all eyes are on China to see how air transport will change in the immediate aftermath of the crisis and beyond.

Freighter aircraft are busier than they have ever been in peacetime. Ironically, the excess capacity that has plagued the air-cargo industry is now coming in very handy. Lufthansa has even started pioneering the use of ordinary passenger aircraft to carry cargo without conversion. All airliners have some cargo capacity in addition to the ordinary luggage hold, but Lufthansa has started to pile light bulky emergency medical supplies on the seats of its airliners as China emerges from the crisis and can afford to ship healthcare supplies abroad (image via Lufthansa): 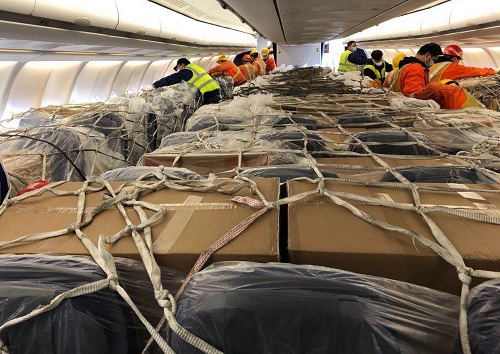 As Airbus CEO Fleury said, “not all airlines will go bankrupt,” but beyond doubt, many marginal players with little in government backing won’t emerge from this crisis.

The many airlines of Egypt and Turkey in particular are likely to be savaged. These companies completely depend on steady revenues in hard currency (chiefly euro) to stay afloat. With tourism pretty much dead for 2020, and with the large Egyptian and Turkish expat communities either already back home or under lockdown in Europe, there isn’t a whole lot left for them to do.

Egypt and especially Turkey cannot afford a general bailout of their aviation sector. While the existence of their two flag carriers is unlikely at risk, only a fraction of the other airlines may survive. They took on too much debt to fuel their explosive growth, and as most of this debt was incurred in foreign currency, local central banks will only be able to do so much to help.

This scene will likely repeat itself in many other countries, even those that are hopefully the least affected by the pandemic.

But the Civil Aviation Authority of China (CAAC) has already been tasked by the government in February, at the height of the healthcare emergency, to come up with a massive reorganization and support plan for the industry. This plan will likely include a wave of forced mergers and acquisitions at “pennies to the dollar” valuations.

Hong Kong Airlines, already in serious financial difficulties following the collapse of HNA Group, was originally set to receive a bailout worth RMB 2 billion (about $290 million) through state-owned conglomerate Citic and a group of HK magnates. But the deal was scuttled for reasons unknown. Now quasi-bankruptcy administrators, the “HNA Group Risk Management Committee,” seem to favor handing Hong Kong Airlines over to state-owned carrier Air China for what will most likely be a symbolic sum.

As air traffic in China is cautiously but steadily picking up by the week, the CAAC restructuring and support plan will make itself felt. And what are our Western governments doing apart from throwing money around like confetti? By MC01, a frequent commenter, for WOLF STREET

130 comments for ““Not All Airlines Will Go Bankrupt”: How Will Coronavirus Travel-Bans Impact Airbus, Suppliers, and Airlines?”