Even after the bottom is perceived to be in, “buybacks may be slow to come back” as companies struggle for cash amid potential government restrictions on buybacks and their dismal public image: S&P Dow Jones Indices.

Share buybacks by companies in the S&P 500 Index in the fourth quarter 2019, before the Coronavirus was even a factor, fell 18% from a year earlier, to $181.6 billion, after falling 13% and 14% year-over-year in the prior two quarters, from the blistering tax-cut records set in 2018, according to S&P Dow Jones Indices today. For the full year, buybacks fell 9.6% from the tax-cut record in 2018, to $729 billion in 2019, the second highest annual total ever. 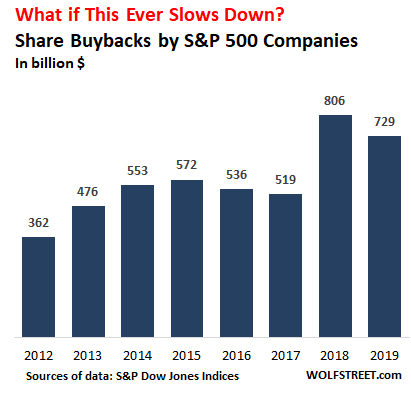 Since the beginning of 2012, these companies have bought back $4.6 trillion with a T of their own shares. To provide a comparison of how big this T-number really is: It blows past the magnitude of Germany’s annual GDP.

Share buybacks were considered illegal market manipulation until 1982, when the SEC issued Rule 10b-18 which provided corporations a “safe harbor” to buy back their own shares. The only thing that share buybacks are supposed to accomplish is to manipulate up share prices.

The four biggest US banks were among the 10 biggest share buyback queens in terms of the amount of capital they wasted on share buybacks in Q4 2019. Combined they incinerated $95 billion in capital last year, and $275 billion over the past five years (if your smartphone clips the 6-column table, slide the table to the left):

The banks could have used those funds to shore up their capital, which would have been useful now as the bubbles in corporate debt and commercial real estate, that the Fed was so worried about, are coming unglued.

But aside from generating fees for Wall Street, share buybacks do zero for the economy. What would have happened in the US economy if that $4.6 trillion in capital that companies incinerated by buying back their own shares since 2012 would have been invested in equipment, structures, expansion projects, and people, or would have been used to reduce debt so that companies, such as Boeing and the airlines, wouldn’t be in such a precarious situation today? 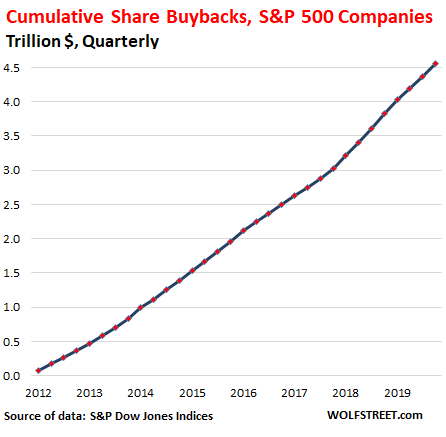 That capital that was incinerated by companies buying back their own shares would come in handy for companies that are now begging for and getting mega-bailouts from taxpayers and to an even larger extent from the Federal Reserve.

“COVID-19 has significantly changed the 2020 landscape, as dividends are under pressure and buybacks appear to be gasping for air,” said the report by S&P Dow Jones Indices, adding that “buybacks must now compete with other corporate priorities as uncertainty over liquidity is at its highest since the 2008 financial crisis.”

The report says that for 2020, most companies have moved buybacks “to the backburner,” having “reordered their short-term priorities:”

For Q2 2020, buybacks are “expected to be dismal,” and for the rest of the year, “buybacks may see a complete reversal of the 2018 buyback bonanza.” And the report by S&P Dow Jones Indices adds, even after the bottom is perceived to be in, “buybacks may be slow to come back” as companies, struggling for cash, limit spending amid potential government restrictions on buybacks and their dismal public image.

So the biggest buyer in the stock market, the one that never sells and only buys, the relentless bid that wants to buy high to drive the share price even higher, well, this relentless mega-buyer that blew $1.5 trillion over the past two years buying the shares of the largest companies in the S&P 500 got burned and, now screaming in pain, jumped away from the market at the worst possible moment.

Chapter 11 bankruptcy that wipes out shareholders is the correct solution for collapsing share-buyback queens. US airlines already know this from experience. It works. Read...  After Blowing $4.5 Trillion on Share Buybacks, Airlines, Boeing, Many Other Culprits Want Taxpayer & Fed Bailouts of their Shareholders

113 comments for “Share Buybacks Are Toast for 2020: Oops, that was the $4.6 Trillion Driver of the Stock-Market-Bubble”