Companies buying back their own shares has “consistently been the largest source of US equity demand.” Without them, “demand for shares would fall dramatically.” Too painful to even imagine.

Goldman Sachs asked a nerve-racking question and came up with an equally nerve-racking answer: What would happen to stocks “in a world without buybacks.” Because buybacks are a huge deal.

In the fourth quarter 2018, share repurchases soared 62.8% from a year earlier to a record $223 billion, beating the prior quarterly record set in the third quarter last year, of $204 billion, according to S&P Dow Jones Indices on March 25. It was the fourth quarterly record in a row, the longest such streak in the 20 years of the data. For the whole year 2018, share buybacks soared 55% year-over-year to a record $806 billion, beating the prior record of $589 billion set in 2007 by a blistering 37%! 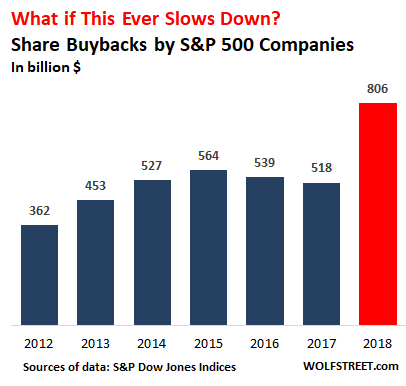 Share buybacks had already peaked in 2015 and ticked down in 2016 and 2017. Then the tax reform act became effective on January 1, 2018, and share buybacks skyrocketed.

The record buybacks in Q4 came even as stock prices declined on average 5.3%, according to S&P Down Jones Indices. On some bad days during the quarter, corporations were about the only ones left buying their shares.

For the year 2018, these were the top super-duper buyback queens:

But who, outside of corporations buying back their own shares, was buying shares? Goldman Sachs strategists answered this question in a report cited by Bloomberg, that used data from the Federal Reserve to determine “net US equity demand.” These are the largest investor categories other than corporate buybacks, five-year totals:

So it all worked out. As investors were selling, companies were buying back their own shares. And markets boomed. But what would happen to stocks in a “world without buybacks?”

Share buybacks were considered securities fraud under most conditions until 1982 but then became legal under a new set of loose rules. Now some folks in Congress from both parties, who are worried about corporate governance and the like, have targeted share buybacks in some of their speeches and have proposed some legislation. Goldman is apparently worried that they might get some traction. And so it created its scenario of a world without buybacks.

It would be a truly unspeakably, nay, unthinkably gruesome nightmare that no politician would want to be responsible for: a world in which stock prices would decline!

“Repurchases have consistently been the largest source of U.S. equity demand,” the Goldman strategists wrote in their note. “Without company buybacks, demand for shares would fall dramatically.”

They note that over the past 15 years, for the median S&P 500 company, earnings-per-share growth, powered by the reduction in the stock outstanding, was on average 2.6 percentage points higher than actual earnings growth.

In this manner, in a world without buybacks, “forward EPS growth could be trimmed by 250 basis points,” they said. This type of reduction, they said, has historically corresponded to a 1-point decline in forward price-earnings multiples.” In other words, valuations would fall.

And then there is the biggie: The question of just “demand,” no matter what earnings or earnings-per-share may be.

“Eliminating the largest source of equity demand could lower the demand curve if other investor categories do not replace the corporate bid from buybacks,” they warned. And the bull market would lose the force that powered it.

Share buybacks are the relentless bid, buying at any price, buying not to acquire assets at a low price but buying with the specific purpose of pushing up prices.

Letting the stock market fend for itself and embark on its own price discovery without the relentless bid of share buybacks would be a true nightmare. No one would be ready for it. This type of world is just too painful to even imagine these days.

104 comments for “What Would Stocks Do in “a World Without Buybacks,” Goldman Asks”