81% of the vehicles are exported; they can be built anywhere. Honda is leaving. Nissan may be too. Vauxhall may be shuttered. Jaguar Land Rover offshored some production. But EV production soared.

Auto production in the UK slumped by 14.2% in 2019 to 1.3 million units, the lowest since 2010 when the industry was grappling with the fallout of the Global Financial Crisis. Five years ago, UK car production was growing and on target to hit 2 million units a year by 2020, beating the record set in 1972. Instead, it has slumped for the past three years in a row, in total by 24% since 2016, according to the industry group, the Society of Motor Manufacturers and Traders (SMMT): 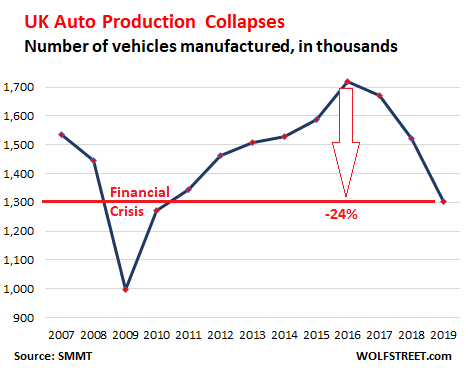 The industry faces a litany of problems, including the broad, ongoing shift away from diesel across Europe, shifting production to other countries, significant model production changes, low confidence in the UK economy, sliding demand at home and overseas, and Brexit-related issues.

81% of the vehicles are exported; they can be built anywhere.

Production for domestic sales dropped 12.3% in 2019, to 247,000 vehicles. Production for export dropped by 14.7% to 1.056 million vehicles, with overseas orders still accounting for 81% of the vehicles assembled in UK plants.

The manufacturers with the sharpest production declines in 2019 compared to 2018, were:

Honda and Nissan have plants around the world and can build vehicles anywhere.

Even JLR has plants in multiple countries, including in the EU (Slovakia), India, China (joint venture with state-owned Chery Automobiles), and Brazil. In 2018, JLR shifted production of its Land Rover Defender from the the UK to its assembly plant in Slovakia, where it cashed in €125 million of investment aid from the Slovakian government.

Toyota was the only major manufacturer to increase production. It builds the Corolla in the UK, and output rose 15% to 148,106 vehicles.

The uncertainty surrounding the long-dragged-out Brexit process bore much of the blame for the downturn. Fresh inward investment in the sector has plunged while factory shutdowns in April and November, timed to deal with expected disruption from the UK’s departure from the EU (which in the end didn’t happen until Jan. 31, 2020), also had a “marked effect” on production. In April alone, output tumbled by 45% year over year.

EU countries remain the UK car industry’s most important market. Although exports to the bloc fell by 11% in 2019, its share of exports actually increased by 2 percentage points, to 55%, since exports to the UK auto industry’s other three biggest markets fell by either a similar amount or more: the U.S. (-10%), China (-26%), and Japan (-17%).

“Given the uncertainty the sector has experienced, it is essential we re-establish our global competitiveness and that starts with an ambitious free trade agreement with Europe, one that guarantees all automotive products can be bought and sold without tariffs or additional burdens,” said SMMT Chief Executive Mike Hawes. “This will boost manufacturing, avoid costly price rises and maintain choice for UK consumers.”

Hawes is right, of course: the more that further disruption to the industry’s connections with mainland Europe can be avoided, the better. But the problems and challenges facing the UK’s car industry go far beyond Brexit. They include the broad consumer shift in both the UK and the EU away from diesel vehicles to gasoline-powered cars and to a smaller extent, to EVs. And EV production has taken off a few years ago: in 2019, EV production surged by 35% to 192,304 units — now accounting for 15% of total UK production.

The diesel backlash is the legacy of the 2015 Dieselgate scandal, with prosecutors dragging ever more manufacturers into court. The UK government’s response was to pledge that by 2040 all diesel and gasoline powered vehicles will have been replaced by electric vehicles. Some cities have already passed local legislation either banning some or all diesel vehicles, or making it much more expensive to drive them. Demand for diesel cars has collapsed on both sides of the English channel. And car companies, left with little other choice, are halting their production.

This shift is causing mayhem for global automakers. In the last couple of years alone, UK-based manufacturers have axed the following models, three of which — the Vauxhall Corsa, Honda’s CR-V and the Toyota RAV4 — were hugely popular:

Although Britain’s largest automaker, Jaguar Land Rover, is not on the list, it is more exposed to the diesel market than just about any other company. In 2017, 90% of its sales in Britain, its largest market, were diesels. Last May, the company declared its biggest ever annual loss, of £3.6 billion, partly due to a sharp slowdown of sales in China. Global retail deliveries fell 5.8% to 578,900 vehicles, and global revenues fell 6.1% to £24.2 billion. The company has since laid off 5,000 workers, most of them in the UK (after shifting production of its Land Rover Defender to Slovakia).

Which automakers are on the way out?

Honda, which suffered the biggest slump in UK production in 2019 (-31%), unveiled plans to exit the UK completely by 2021, leading to the loss of 3,500 jobs and ending a manufacturing relationship that began in 1989. Its exit will remove a key element of the Japanese manufacturing influx that filled the void left behind by the collapse of stalwart UK manufacturers in the ’70s and ’80s.

Concerns are rising that Nissan, whose production in 2019 plunged by 21% and whose massive plant in the North East accounts for almost one third of UK auto production and employs over 7,000 people, could follow Honda out of the UK. The struggling company has already announced that it will not be building the X-Trail sport-utility vehicle at its Sunderland plant. In October, it suspended all overtime at the plant.

Fears are mounting that Vauxhall could shutter its Ellesmere plant after its owner, France’s PSA Group, agreed to merge with Fiat Chrysler. And Ford is also expected to reduce its UK workforce.

Honda’s sudden exit from the UK and Nissan’s gradual retreat are likely to be as much a result of the trade treaty Japan signed with the EU in 2018, which includes a commitment to gradually reduce EU car duties on imports of Japanese cars from current 10% to zero in 2027, as they are of Brexit. The UK was always seen by Japanese car firms as a strategic stepping stone into the EU market, but with Brexit taking place at virtually the same time as the passage of the EU-Japan trade deal, its usefulness as a manufacturing base has significantly diminished. By Nick Corbishley, for WOLF STREET.

President AMLO put it this way: “There may be no growth but there’s development and well-being, which are different.” Read…  Global Slowdown, Internal Issues Hit Mexico: GDP Drops for First Time Since 2009

58 comments for “Why Has UK Auto Manufacturing Collapsed 24% in Three Years?”