“Probably the largest demand shock the oil market has suffered since the global financial crisis, and the most sudden since the Sept. 11 attacks.”

The measures imposed by Chinese authorities, by authorities in other countries, and by businesses and consumers to counter the spread of the coronavirus have slammed the demand for crude oil and petroleum products. In parts of China that now span an area producing nearly 70% of its GDP, many transportation systems have been shut down. Traffic has radically fallen off as people stay at home. Countless flights in China, and to and from China, have been cancelled. As I pointed out in my podcast on the economic effects of these measures, this comes at the worst possible time for the already beaten up US shale oil industry.

Now some numbers have emerged from “Chinese and Western oil executives, speaking on condition of anonymity because they aren’t authorized to discuss the matter publicly,” to what extent demand in China for crude oil has collapsed. They told Bloomberg that oil demand, as measured against normal levels in China for this time of the year, has currently dropped by 3 million barrels per day, or by 20% of total consumption.

“The drop is probably the largest demand shock the oil market has suffered since the global financial crisis of 2008 to 2009, and the most sudden since the Sept. 11 attacks,” Bloomberg reported.

The sudden drop in demand in China – the world’s largest oil importer – wiped out hopes that growing global demand for crude oil in combination with production cuts by OPEC could overcome surging US production in 2020.

In reaction, crude oil prices dropped across the board, starting in early January. Today, West Texas Intermediate (WTI) fell another 3.5% and is currently trading at $49.80, down 21% from January 6 and at the lowest since January last year: 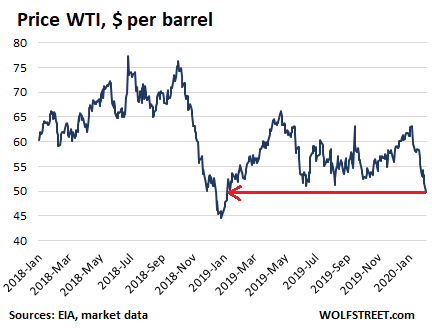 The plunge in Chinese demand has already rippled across suppliers. Bloomberg, citing industry sources, reported last week that sales from Latin America to China have ground to a halt:

Zero sales have been reported since last week for March-loading cargoes from Brazil and Colombia and unsold cargoes are piling up, according to people familiar with the matter. Interest from buyers has been sluggish. China hasn’t so far canceled or postponed any cargoes set to load in February, the people said.

Brazil has become the main Latin American oil supplier to China, surpassing Venezuela, which is plagued by sanctions and an economic and humanitarian crisis. Brazilian oil Lula is, after Russian ESPO, the most sought-after grade by China’s independent refineries, known as teapots. The teapots are the most exposed to a drop in domestic consumption and are likely to be hit the hardest by the impact of the coronavirus, according to oil traders in Asia.

But stockpiles are growing every day, and some refineries may soon reach their storage limits. If that were to happen, they would have to cut the amount of crude they process. One executive said that refinery runs were likely to be cut soon by 15-20%.

There are signs that’s already happening. Sinopec Group, the nation’s biggest refiner, is in the process of reducing runs at its plants by an average of about 13-15% and will review whether further cuts are needed Feb. 9, according to one of the people.

China has about 40 teapots, accounting for about a quarter of China’s refining capacity. Of them, about 18 are facing storage capacity that is filling up or has already filled up, and they may cut the rate at which they process crude oil or may shut down processing completely, traders familiar with operations at the plants told Bloomberg.

In the US shale oil industry, all hopes are now ironically on OPEC and Russia to cut production further, after the production cuts late last year that had come before the demand swoon in China.

There are now efforts underway to move the March 5-6 OPEC meeting forward to February 14-15. Under consideration are two options, according to the Wall Street Journal: additional cuts of 500,000 barrels a day, or a temporary cut by Saudi Arabia of 1 million barrels a day, which, according to officials, would be  “aimed at creating a shock in oil markets.”

But the problem is that in China demand at the moment has dropped by 3 million barrels a day, while US production is still growing. And any OPEC cuts are just window dressing until Chinese demand resumes at a somewhat normal pace – and that is not yet on the horizon.

In the US shale oil patch, Texas is at the epicenter not only of oil production but of the destruction of money that loosey-goosey monetary policies encouraged. Read… The Great American Shale Oil & Gas Bust: Fracking Gushes Bankruptcies, Defaulted Debt, and Worthless Shares