Remittances to Mexico is a $36-billion-a-year business.

Remittances from workers of Mexican descent based mostly in the US, but also in other countries, are a lifeline for Mexico’s economy, accounting for almost 3% of GDP. Millions of people depend on relatives working in the U.S. In some Mexican states, they can represent as much as 10% of total revenues. Most of that money gets spent very quickly in the Mexican economy, often on rents or building costs.

This year, Mexico is on target to receive about $36 billion in remittances, an increase of around 7% on the previous record high of $33.4 billion in 2018. To put that figure into perspective, it’s more than the $29.3 billion in revenues that state-owned oil company, Pemex, obtained from its exports of crude oil and other hydrocarbon products in 2018, and is also more than the $30.7 billion Mexico received in foreign direct investment. 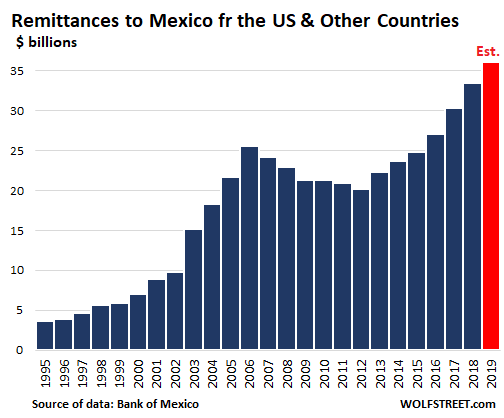 Mexico is the third largest recipient of remittances worldwide, behind India ($82 billion forecast for this year) and China ($70 billion), both with populations more than ten times larger than Mexico’s. This year, remittances are nearly ten times larger than they were in 1995. So $36 billion a year is big business for the money transfer companies, and everyone wants to get a slice of it.

Now Mexico’s government has publicly lambasted a number of financial companies for overcharging on “remittances” made by workers of Mexican descent based mostly in the US to individuals in Mexico. And it piled pressure on banks to lower the charges or to remove them altogether.

The average commission for sending remittances from the United States to Mexico is $9.22, the fifth highest in Latin American (after Colombia, the Dominican Republic, Costa Rica and Cuba), according to the the World Bank. The problem is not just the upfront fees the firms charge but also the delusive exchange rates they bake into their transfer calculator.

The two worst offenders when it comes to fee gouging, according to Mexico’s consumer protection agency Profeco, are PayPal Holdings Inc.’s Xoom and Western Union Co. For instance, for a money order of $300 from Chicago the two firms charge between $5-$8 and use exchange rates that are sharply lower than any of their competitors.

“They are the two worst options for sending your money to your mother or your wife,” said the director of Profeco, Ricardo Sheffield, in a press conference on Monday. The companies that currently offer the best deals include Cloud Transfer, PagaPhone and Banorte, Sheffield said, adding that Profeco will start publishing monthly data on the best and worst money order firms in the U.S. and has set up an online portal that consumers can check.

The Mexican government’s decision to name and shame the highest charging money transfer companies comes at a time of intensifying competition in the sector, as newcomer digital services like TransferWise and WorldRemit enter the fray, often with lower fees and better exchange rates.

Big banks are also sniffing around for opportunities. Last month, Spain’s largest bank, Grupo Santander, which also controls Santander Consumer USA, announced it will no longer be charging fees on remittances to Mexico from account holders sending money from its U.S. branches. Besides being free of fees, Santander’s new remittances program will “offer a competitive exchange rate” as well as transfers that will usually finalize on the same day as the deposit is made.

“We have great confidence in Mexico and Mexicans, and given the complex global situation and [the country’s] own internal challenges, we want to tell the authorities, our teams, customers and communities: we are here,” said Grupo Santander CEO Ana Botin during a sit down with Mexico’s President Andres Manuel Lopez Obrador (AMLO for short). Thanking Botin, AMLO added, “With their example, other banks are sure to follow.” Which was a nice promo for Santander.

The deal offers mutual benefits for Mexico’s government and Santander. AMLO can say to his supporters that he’s fulfilling his manifesto pledge to curb the massively inflated bank fees in the country, when in actual fact his government has done precious little to address the problem. As for Santander, while its remittances gambit may hit its fee income, it stands to lure new clients on both sides of the U.S.-Mexico border while also gaining brownie points with the new administration.

But not everyone has access to fee-free transfers yet. Dubbed “One Pay,” the initiative will at first be available only to customers of the 600 branches Santander has in the eight northeastern states it operates in. Some time next year, it will be expanded to include digital transfers that can be processed via mobile phone platforms. Then, some time in 2021, it will be opened up to clients of all U.S. banks. But the program is available only to those with bank accounts. The “unbanked” in the US will continue to pay the biggest fees and get the worst exchange rates.

And in Mexico there are an estimated 42 million people who are “unbanked,” for a slew of reasons including usurious fees, even for the most basic of financial services, and past scandals. They include many of the people who receive regular remittances from family members in the U.S. They may struggle to qualify for Santander’s “One Pay” program, or similar programs launched by other banks. And they too will be stuck with the biggest fees and worst exchange rates. At least, thanks to Profeco’s new web portal, they might be able to identify which ones to avoid at all cost. By Nick Corbishley, for WOLF STREET.

61 comments for “PayPal, Western Union Named & Shamed for Overcharging the Most on Money Transfers to Mexico”