Conn’s – a retailer with 137 stores in 14 states that sells household goods and electronics to subprime customers preferably financed at blistering interest rates or on a lease-to-own basis – had a five-year anniversary of a crash on December 10.

Its shares plunged 33% on Tuesday after it reported earnings, on issues that included credit deterioration among its subprime customers. Suddenly rising 60-plus-day delinquencies and first-payment defaults, where not even the first payment is made, caused the company to become “prudent” and “tighten credit,” which caused same-store sales to drop 8.5%. And shares plunged (stock data via YCharts): 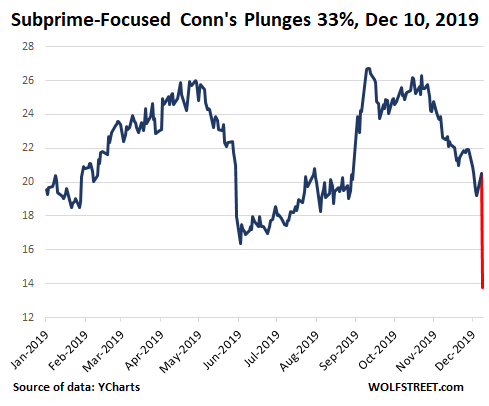 The company cited several reasons, including the dropping prices of TVs, with the average selling price for all TVs down 8% during the quarter, and for large-screen TVs down “nearly 22%,” according to chief operating officer Lee Wright during the conference call (transcript via Seeking Alpha). But what spooked investors was the warning about the deterioration in its subprime credit portfolio and the actions Conn’s undertook to get a grip on it. 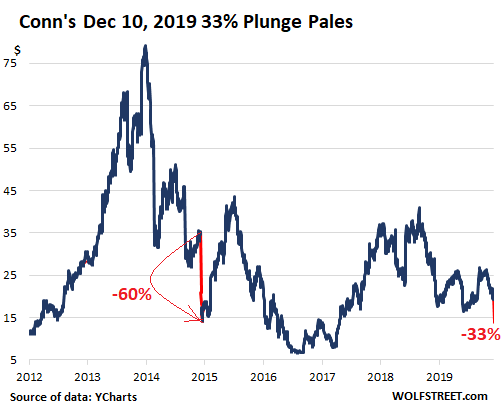 “During the third quarter, we began to see deteriorating performance of certain segments of the portfolio,” said CEO Norm Miller during the earnings call.

New customers and customers who applied for credit online earlier this fiscal year, that’s where first-payment defaults and 60-plus-day delinquencies were suddenly increasing, he said. So the company made “prudent underwriting adjustments” – tightening credit – which cut into same-store sales.

“I mean, when we tighten, we tighten by increasing down payment, we tighten from a lever standpoint, we tighten by just declining outright,” Miller said. “All three of those are actions that we take to impact the credit availability that we provide. And ultimately, that will reduce sales.”

And COO Wright warned: “Our near-term provision and allowance will be higher as we account for charge-offs associated with accounts originated prior to the third quarter.”

The company increased its store count by 13% year-over-year, adding 16 stores over the past 12 months to a total of 137 stores.

And despite the big increase in stores, product sales (not finance charges) fell 1.3% year-over-year to $280 million.

In its 10-Q filed with the SEC on December 10, the company explained where this increase in credit revenue came from:

“New customers have historically – and we’ve communicated that many times, and this isn’t a Conn’s phenomenon, this is a subprime phenomenon – they’ve defaulted twice the rate of existing customers,” said CEO Miller.

While the company “had the best credit performance in six years,” that is a “lagging indicator,” said CEO Miller.

The “leading indicators” are first-payment defaults and 60-day delinquencies, he said. “And we see that typically in 60 to 120 days from an underwriting standpoint.”

It’s the new customers, particularly those the company picked up via its website – “We’re getting an abundance of customers there,” he said – where the problems now are, not the established credit accounts.

“We start to see those vintages come in, we take action. And we do it regularly, but we saw more of a softening on the new side of the house, new web, especially,” he said. And “we have to be very prudent.”

He didn’t “think” it was a “macro” issue, because in a recession with unemployment rising, delinquencies among existing accounts would begin to rise. But it has been “fairly stable there,” he said. The issue is in new accounts.

But that’s where the growth is. Or rather, was. Since the company tightened credit due to the first-payment defaults and delinquency issues by new accounts – the leading indicators – retail sales have taken a hit, despite the steamy expansion of stores.

So the previous sales growth came from taking on the riskiest customers that stretched the most to get there, and once underwriting becomes more prudent, sales decline? This is a broader phenomenon in the current economy, including in subprime auto sales.

In the 10-Q, Conn’s explains how this business works – and this is not for the faint of heart:

We provide in-house financing to individual consumers on a short- and medium-term basis (contractual terms generally range from 12 to 36 months) for the purchase of durable products for the home. A significant portion of our customer credit portfolio is due from customers that are considered higher-risk, subprime borrowers.

Our loan contracts generally reflect an interest rate of between 18% and 36% … [depending on the state].

We offer qualified customers a 12-month no-interest option finance program. If the customer is delinquent in making a scheduled monthly payment or does not repay the principal in full by the end of the no-interest option program period (grace periods are provided), the account does not qualify for the no-interest provision and none of the interest earned is waived  [so all of the waived interest suddenly becomes due].

We regularly extend or “re-age” a portion of our delinquent customer accounts as a part of our normal collection procedures to protect our investment. Generally, extensions are granted to customers who have experienced a financial difficulty (such as the temporary loss of employment), which is subsequently resolved, and when the customer indicates a willingness and ability to resume making monthly payments. These re-ages involve modifying the payment terms to defer a portion of the cash payments currently required of the debtor to help the debtor improve his or her financial condition and eventually be able to pay the account balance… [re-aged loans are then no longer considered delinquent].

Re-ages are not granted to debtors who demonstrate a lack of intent or ability to service the obligation or have reached our limits for account re-aging.

To a much lesser extent, we may provide the customer the ability to re-age their obligation by refinancing the account, which typically does not change the interest rate or the total principal amount due from the customer but does reduce the monthly contractual payments and extends the term.

These are the good times, but why are subprime credit cards, auto loans, and short-term installment loans blowing out? Read… What’s Behind the Subprime Consumer Loan Implosion?