Hedge-fund manager Steven Cohen and Michael Bloomberg are among those ruing the day they bought the crushed shares of the UK bank touted as a “bargain.”

Even by its own recent standards, Metro Bank has had a torrid week. On Monday, shares of the British retail bank tumbled 5%, on Tuesday, 25%, on Wednesday, 5%, and on Thursday, 4.5%, before staging a brief comeback in the final hours of trading on Friday, to end the week 35% lower. By Friday morning, it was the second most-shorted stock on the FTSE all shares index, behind the collapsed travel & vacation-giant Thomas Cook.

The main trigger for this week’s rout was the bank’s failure on Monday to raise a much-needed £250 million by issuing non-preferred bonds that deeply skeptical investors spurned. Despite trying to lure buyers with an interest rate of 7.5%, double the rate of similar offerings, Metro only attracted £175 million worth of orders, prompting the embattled lender to pull the plug on the bond sale.

“Failure to get enough support for a product that is yielding 7.5% is quite remarkable when you consider how investors are struggling to find generous levels of income in the current market,” said Russ Mould, the investment director of AJ Bell. “It suggests that investors don’t trust the bank or they believe the 7.5% yield is simply not high enough to compensate for the risks of owning such a product.”

Metro Bank opened for business in 2010, becoming Britain’s first new high street bank in over 100 years. One of a handful of so-called “Challenger Banks” — new retail lenders created after the crisis to provide a little more banking competition in a country where the five biggest banks control a staggering 85% of the market — Metro Bank proved particularly adept at luring disillusioned clients from the big banks.

A large part of its attraction was its focus on physical branches while the big boys were frantically closing theirs. It grew faster than any other high street bank while picking up accolades for its customer satisfaction along the way.

But that was before a misreporting scandal in January this year decimated investor confidence in the bank. Investors — led perhaps by well-connected insiders — had already been smelling a rat since March 2018. From March 2018 until just before the initial disclosure on January 22, 2019, shares got whacked down in bits and pieces by 45%. Upon the disclosure, shares plunged. And they have gotten crushed every step along the way since then. As of today, they’re down 95% from March 2018, and the sell-off over the past few days reduced the shares from nearly nothing to almost nothing, from 288 pence to 192 pence, giving it market capitalization of just £332 million: 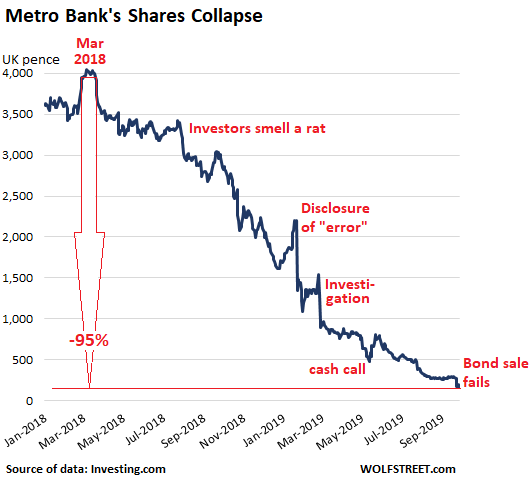 Metro blamed this week’s failed bond sale on tough market conditions. To a certain extent, it has a point: selling unsecured bank bonds just a month before another Brexit deadline is hardly ideal. Bank of Ireland was already forced to cancel a £300 million bond in early September due to the low level of demand; and luxury automaker Aston Martin — which S&P downgraded to deep-junk CCC+ over concerns about its ability to service its big pile of debts debts — had to offer interest rates as high as 12% to convince investors to buy $150 million of bonds due in 2022.

Most of Metro’s problems have been self-inflicted. By assigning a lower risk weight to its mortgage lending portfolio, whether by accident or intentionally, Metro left investors thinking it was safer than it actually is. Once trust is broken, it’s hard to win it back. Flagged up by regulators in January, the “error” left a gaping £900 million hole on its balance sheet, prompting managers to announce plans for a £350 million rights issue. The cash call was successful at 500 pence a share.

But the sell-off continued, leaving some very rich investors, including hedge fund manager Steven Cohen and Bloomberg-founder Michael Bloomberg, nursing heavy losses after they bagged shares at 500 pence during the cash call in May, which had been touted as a “bargain.” And now they’re at 192 pence.

In May, Metro Bank suffered a mini-bank run at some of its London branches. Big business clients withdrew some £2 billion of deposits in the first half, though last week’s bond prospectus showed it recovered much of that over the summer. In July, the lender reported an 80% drop in pre-tax profits for the first half of 2019. Then, last week it disclosed that a Financial Conduct Authority investigation into the bank’s mis-categorization of risk-weighted assets had been widened to include “certain senior members of management”.

Now, it has a new problem on its hands: How to raise fresh capital by the end of the year without having to pay interest rates it can’t afford, just as markets are, by its own admission, getting tougher. It needs the money for two main reasons: First, to comply with the first stage of the so-called MREL (minimum requirement for own funds and eligible liabilities) directive; and second, to roll over the £3.8 billion it drew from the Bank of England’s Term Lending Scheme in 2016. The scheme was ostensibly intended to boost affordable loans to families and businesses.

The interest rate on those extra-cheap loans is around 0.25%. Given that Metro this week failed to raise more than £175 million of four-year senior non-preferred bonds, despite offering 7.5% interest, it’s evidently going to have its work cut out rolling over the loans it took out from the Bank of England. At the very least, it needs more time to get its finances in order. To do that, it will probably need to sell some of its more valuable assets, including part of its mortgage book, which will hit its profitability.

According to the Financial Times, speculation is already growing that Metro could end up being bought by one of its more established rivals. In the ultimate irony, the first British high street bank to be handed a license in over 100 years in the hope it would provide a little extra competition to the big five banks that dominate the sector, may end up being bought out by one of those big banks. By Nick Corbishley, for WOLF STREET.

Thomas Cook collapsed after a rescue deal fell through. China’s Fosun and other shareholders are toast. Creditors get to fight over the debris. Read… Thomas Cook Collapses, up to 600,000 Travelers Stranded in Hotel & Airline Chaos, Triggers “Biggest Peacetime Repatriation in UK History”