But (well-connected?) investors started smelling a rat 10 months before the first disclosure.

Shares of the UK’s fastest growing high street lender, Metro Bank, are in free fall. They tumbled 16% on Tuesday, 25% on Wednesday and 6.86% on Thursday, to come to rest at a price of 889 pence, the lowest since the London-based bank went public in 2016. In the last five weeks the lender has lost 60% of its market cap and is now worth just £866 million, down from £4 billion a year ago.

The crisis began in earnest on January 22 when Metro’s shares crashed almost 40% — the worst one-day fall suffered by any British lender since the financial crisis — following an announcement by the bank’s management that it had incorrectly classified a huge chunk of commercial property loans and loans to commercial buy-to-rent operators that should have been among its “risk-weighted assets”. The “error” left a gaping £900 million hole on Metro’s balance sheet.

On Tuesday this week, things got even worse when the bank revealed that the Prudential Regulation Authority (PRA), the institution that had first flagged up Metro Bank’s accountancy error, and the Financial Conduct Authority (FCA) are investigating the circumstances behind the error. The bank also announced plans for a £350 million rights issue, after raising £303 million from investors last July. But investors — led perhaps by well-connected investors — have been smelling a rat since March 2018. By the time the initial disclosure whacked the shares on January 22, 2019, they’d already dropped 45%. Now they’re down 77% from March 2018: 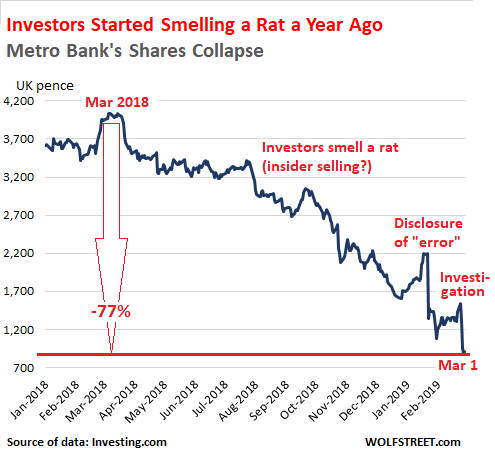 Metro’s tribulations are a timely reminder of how important a force trust can be in the financial markets, particularly when it comes to banks. To gauge how much of a credit risk a bank could pose to market participants, including the bank’s bondholders and counterparties, investors rely on the bank’s capital ratio, which itself depends on the amount of risk assigned to each portfolio. By assigning a lower risk weight to its mortgage lending portfolio, whether by accident or intentionally, Metro left investors thinking it was safer than it actually is.

Now it needs to win back the trust it has lost. That could be an uphill slog for a lender that opened for business just nine years ago, becoming Britain’s first new high street bank in over 100 years. Metro is one of a handful of so-called “Challenger Banks” — small, nimble retail lenders created after the crisis to provide a little more banking competition in a country where the five biggest lenders control a staggering 85% of the market. Metro has had particular success at luring disillusioned clients from those banks. More than 100,000 new customers joined in the fourth quarter of 2018 alone.

Part of its appeal is its focus on physical branches — or “stores” as the company calls them — while most large banks are frantically closing theirs. Metro is also open seven days a week, and has longer working hours than other high street banks.

The lender even recently topped a Competition and Markets Authority (CMA) survey based on whether customers at the UK’s 16 largest current account providers would recommend their bank to friends and family, with 83% of Metro customers saying they would. Not one of the UK’s big four banks (HSBC, Lloyds, Barclays, RBS) made it into the top five while largely state-owned RBS came in rock bottom with a 49% customer satisfaction rate.

Unlike RBS, Metro Bank’s big problem is not with its customers; it’s with investors, counterparties and regulators. According to Bloomberg, Fidelity Investments, Metro’s second largest shareholder, has already reduced its stake in Metro Bank from 8.53% to 7.9%. Other big shareholders may follow. Another big risk is that other bank counterparties get cold feet, and refuse to make loans or close out existing credit lines.

Metro says it has already secured a standby underwriting agreement with RBC Capital Markets, Jefferies and KBW for the capital expansion, meaning the investment banks will have to make up the difference if investors are unwilling to pour more money into the lender. Metro also plans to issue around £500 million of bonds later this year to help ease capital concerns.

Metro hopes that this will be enough to calm investors’ nerves and stem the rout. It may be far too small a bank to pose any kind of systemic risk if it does go down, but its accounting blunder should serve as a timely reminder that when it comes to bank balance sheets, what you see is not always what you get. And if Metro does pay the ultimate price for its transgressions, its presence will certainly be missed on the UK high street.  By Don Quijones.

The banks claim they’re complying with anti-money laundering regulations, but their customers beg to differ. Read…  All Heck Breaks Loose After Spanish Banks Block Thousands of Accounts with Chinese Names & Folks Can’t Get to Their Money

Dotcom Bust 2 has begun. Only bigger.