Fifth deal croaked in August. Moody’s has a cow over Ancestry.com’s deal. Deals had to be sweetened to find buyers. Retail investors bail out.

Despite the Fed’s warnings over the years about leveraged loans – including in its Financial Stability Report and in the minutes of its July meeting – the leveraged loan market has only gotten bigger and riskier and has ballooned to $1.3 trillion globally by a narrow definition, or to $3.2 trillion by a broader definition. But first signs are appearing that it’s getting rougher.

Ancestry.com, a heavily indebted, junk rated DNA-tester – owned by private-equity firms Silver Lake Partners and Spectrum Partners and by Singapore’s sovereign wealth fund – was able to complete a $1.385 billion leveraged loan, according to “sources” cited today by LCD of S&P Global Market intelligence. The loan’s primary purpose was to fund what was supposed to have been one of the largest special dividends back to its owners. But the way the loan was originally pitched ran into a wall of resistance, forcing the company to make concessions.

Five other leveraged loan deals have gotten pulled in August because they failed to find reception in the market. For now, it’s just the beginning of a crack. In total, $28 billion in leveraged loans have been priced in August, according to Bloomberg, and those five loans that got pulled so far amounted to only $1.3 billion. But it’s a sign that investors are starting to open their eyes a teeny-weeny bit.

The way the Ancestry loan was originally pitched, the special dividend back to its private equity owners was supposed to be $912 million. In addition, the PE firms were trying to get creditors’ consent for a clause in the debt covenant that would allow it to extract another $150 million in special dividends by the end of the year.

So the already heavily leveraged company was going to be loaded up with an additional $1.15 billion in debt and use $387 million in cash on hand to allow its PE firm owners to strip out $1.06 billion in cash. The remaining proceeds of the loan would be used repay some existing debt.

Moody’s had a cow.

Moody’s credit rating for Ancestry is already a highly speculative B2, which is five notches into junk (my plain-English cheat sheet for the corporate credit rating scales by Moody’s Fitch, and S&P)

So on August 8, Moody’s announced that, based on the size of the debt-funded dividend and some other factors, it would change its outlook for Ancestry to “negative,” from “stable,” putting another credit downgrade on the table. It also withdrew its Speculative Grade Liquidity Rating of SGL-2.

“The dividend is a clear step-up in the aggressiveness of the company’s financial policy,” Moody’s wrote. “Recent declines in DNA kit sales and subscribers have made future prospects more uncertain, making this an inopportune time to raise leverage aggressively.”

“Given our expectation for little to no earnings growth, debt-to-EBITDA leverage is likely to remain elevated above 7.0x while free cash flow could quickly deteriorate should subscriber weakness continue, hence the negative outlook,” Moody’s wrote.

And the market too balked.

When the loan was being shopped, potential investors’ reluctance was palpable. So by August 15, the dividend was reduced by $200 million to $712 million. The pricing of the loan was increased from the original Libor plus 400 basis points to Libor plus 425 basis points, according to LCD. And some protections for creditors were added into the covenant, which is still “cov lite” and leaves creditors exposed. And the loan size was increased to fund a larger repayment of part of an existing loan.

Those new terms soothed Moody’s, which on August 19 changed its outlook back to “stable,” from “negative.” But it added that “the debt-funded dividend remains aggressive.” So that deal got done, as of today.

But five other leveraged loan deals got scrapped in August.

So far in August, five loan deals were pulled, for a total of $1.3 billion – the last one being a leveraged loan proffered by streaming-service provider Vewd Softare, according to Bloomberg today. Vewd is owned by New York-based PE firm, Moore Frères & Company.

Other deals had to be sweetened to become palatable, including the $367 million leveraged loan by Total Safety Inc. The provider of industrial safety services is owned by PE firm Littlejohn & Co. It needed the money to fund the acquisition of Sprint Safety. The deal got done only after it was priced at 93 cents on the dollar.

But retail investors bail out.

Loan mutual funds and loan ETFs used to be popular – especially with retail investors. Leveraged loans normally have floating rates. For example, Ancestry’s loan was issued at a rate of Libor plus 425 basis points. In a rising interest-rate environment, such as 2018, the interest rate on those loans adjusts, and so the yield rises, but the price of the loan remains roughly stable. Bonds on the other hand experience falling prices as yields rise.

But the market got the jitters late last year. Leveraged loans are notoriously slow to sell, creating a potentially treacherous liquidity mismatch in a fund that allows for daily withdrawals. Fear of the liquidity mismatch, and the potential for a run on the fund, caused investors to try to get out the door first.

And this year, markets figured that interest rates would fall, instead of rise, and more investors withdrew their money from loan funds, leading to 40 weeks in a row of net withdrawals, now totaling about $36 billion (data via LCD, citing Lipper): 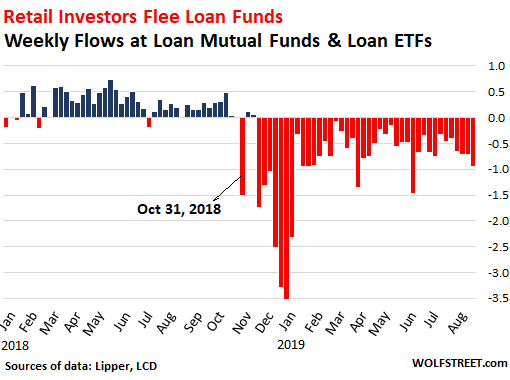 However, CLOs have remained popular. After a blistering record of new issuance in 2018, the year 2019 started out with even more issuance: Through mid-July, $77 billion in CLOs were issued, according to LSTA, up from $57 billion from the same time in 2018. But there are now doubts that this pace of issuance will continue.

Who holds these CLOs? According to a Bank of England’s most recent Financial Stability Report, banks are big holders of A or higher rated tranches, including US banks ($160 billion), European Banks ($32 billion), and Japanese banks ($96 billion). Insurance companies hold $160 billion of CLOs, and hedge funds $96 billion.

But there is murk everywhere. There isn’t even an agreement what “leveraged loans” are. And banks are not off the hook. They hold 57% of these instruments in various forms, the Bank of England found. Read…  Who Holds the $3.2 Trillion in “Leveraged Loans” and CLOs?