Last time was during the Financial Crisis. Now it’s happening in a kinder and gentler way, but there is no crisis. 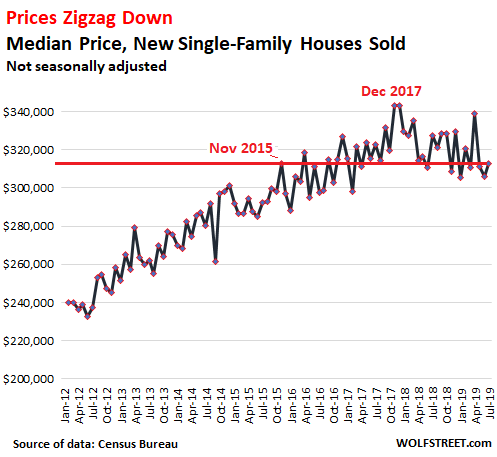 These price changes do not include the incentives – the free upgrades of finishes, counter tops, and the like – that homebuilders dangle in front of potential buyers to make deals. With incentives, buyers get a little more for the same price. The price declines in the chart are on top of that.

The trend via the three-month moving average.

As you can see from the chart above, this data – produced jointly by the Census Bureau and the Department of Housing and Urban Development – is, let’s say, a little “volatile” on a month-to-month basis. It also gets revised (up or down) in the following months. The three-month moving average smoothens out some of those effects and allows for longer-term trends to become clearer. 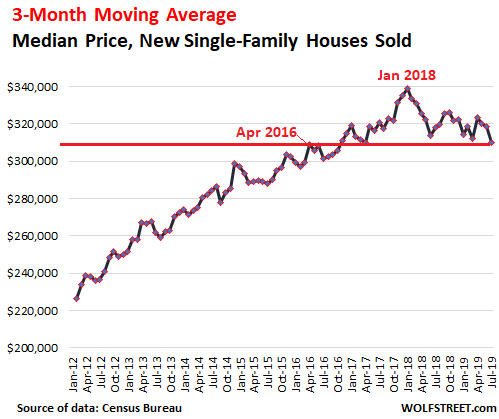 The price trend peaked in November and December 2017 and then broke. Due to the volatility of the data, this became clear only with the benefits of substantial hindsight, but it has been clear for a while.

The long-term chart of the median price, based on the three-month moving average going back to 2000, shows the significance of the 9% decline: From peak to trough during Housing Bust 1, prices dropped 18%. So about twice as much. But back then, it happened during the middle of the Financial Crisis and the mortgage crisis and the collapse of Housing Bubble 1. Now it is happening – but in a kinder and gentler way – without crisis: 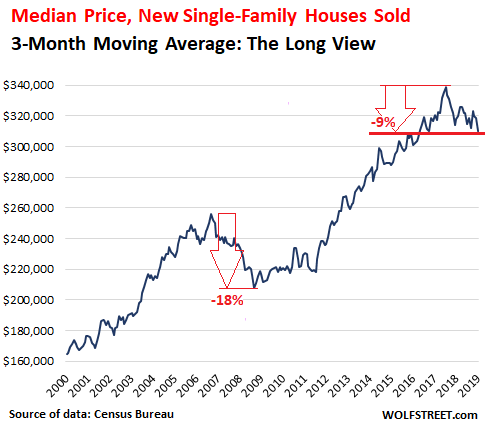 Despite near record-Low mortgage rates.

So why would prices start falling even with the labor market being in the best condition since about early 2000, with consumers spending fairly eagerly and borrowing to do so, and with mortgage rates having plunged to the lowest level since November 2016 to only a quarter percentage point above the historic low of 2012? 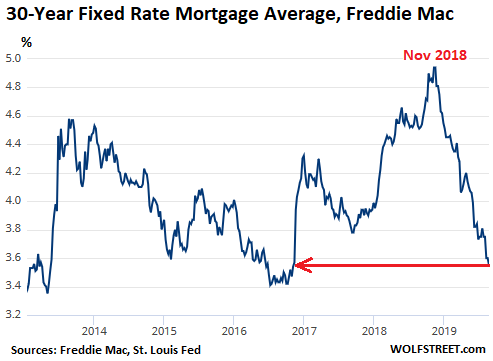 The plunge in mortgage rates has been touted for months as the thing that would kick the housing market into high gear, and send sales volumes soaring, and send prices chasing after volume. So why is it not happening: Because in many markets, prices have hit a ceiling, and buyers just don’t feel like paying so much for so little? Maybe.

Homebuilders are the pros in the housing market. They have to build homes and sell these homes no matter what the market does. That’s their business. They cannot sit it out. They have to go where the market is going. For them to maintain their sales volume, they have to do whatever it takes – including throwing in big incentives, lowering prices on their speculative inventory, and building houses that can be sold at lower price points, with the goal of selling the houses they built.

Sales of single-family houses in July rose 4.3% from July 2018 to a seasonally adjusted annual rate (SAAR) of 635,000 houses. Although this is only about half the rate of crazy 2005, by the standards of recent years going back to 2012, this is fairly high. So homebuilders are doing what they must to maintain sales volume: 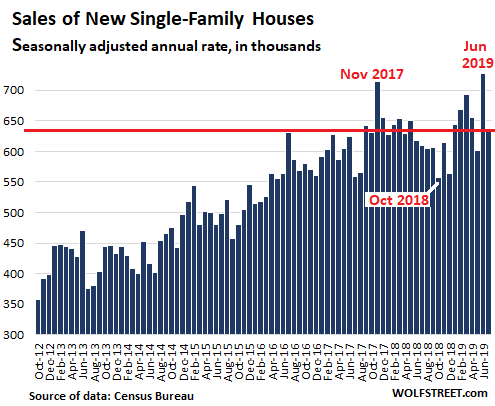 The relationship between prices and sales.

The pros (the homebuilders) know that when sales start falling, it’s time to cut prices and see what happens. Sales started falling in 2017; and the price cutting started in tiny increments, and sales continued to fall through much of 2018. But in 2019, as prices continued to decline, sales perked up and are back to 2017 levels.

This becomes clearer by comparing the three-month moving average of the median price (red line) to the three-month moving average of sales volume (blue columns). It shows how the drop in sales in late 2017 was stopped a year later, and how sales have since picked up, due to a combination of lower prices and lower mortgage rates. But after the initial burst in early 2019, sales volume is now back on the decline, exerting further downward pressure on prices: 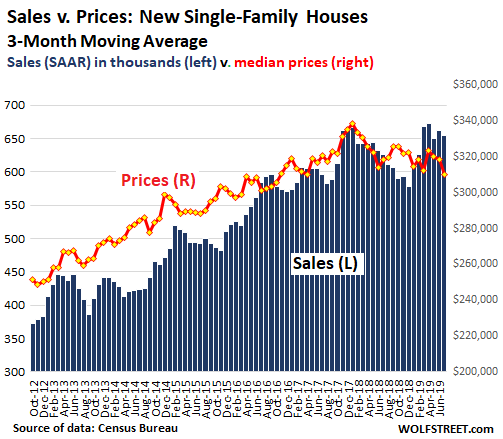 And the inventory of new houses for sale rose to 337,000 houses, providing 6.4 months of supply at the current rate of sales. This measure of supply has remained stubbornly high and is about 3% higher than the already high levels of July a year ago. Four months’ supply would be more than plenty. This 6.4 months’ supply is at the same level as in June 2006, at the beginning of Housing Bust 1: 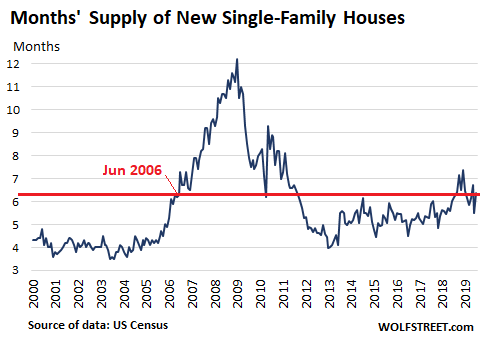 With this quantity of inventory for sale, homebuilders will be motivated to do what they can to keep supply from rising further or worse, spiking – as seen during the housing bust. And what they can do is offer incentives, cutting prices, and making deals, which is putting more downward pressure on prices going forward.