House prices dropped again – and ironically the most in San Francisco and Silicon Valley.

In the San Francisco Bay Area overall, house prices dropped again in July compared to July last year. They dropped in eight of the nine counties on a year-over-year basis: Silicon Valley (Santa Clara and San Mateo), San Francisco, Marin, the Wine Country of Napa and Sonoma, and the East Bay (Alameda and Contra Costa). The only county where house prices ticked up year-over-year was in the least expensive county, Solano.

The drops pushed the median house price for the Bay area 3.1% below where it had been in July 2018, and 9.5% below the peak in May 2018, according to the final data by the California Association of Realtors (C.A.R.). The median price is now back where it had first been in June 2017: 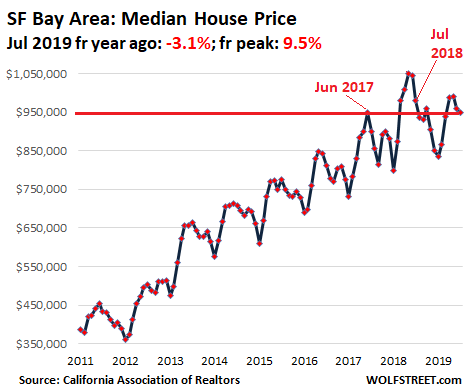 Sales volume of houses in the SF Bay Area ticked down 0.6% in July from the already depressed levels a year ago.

“The market will continue to be challenged by an overarching affordability issue, especially in high cost areas such as the Bay Area, which requires a minimum annual income well into the six figures to purchase a home,” the CAR’s report said.

In California overall, there is now a bifurcation: Condo prices are already falling on a year-over-year basis, and house prices are still rising. The median condo price in California fell 3.1% in July compared to a year earlier. But the median house price rose 2.8%.

The median house price by major region other than the Bay Area, in July year-over-year:

But some parts of the Bay Area are starting to have a wild ride. This is a vast region with a population of nearly 8 million people, separated by the various Bays. The big convoluted body of water with just a handful of infamous bottle-neck bridges has a hefty impact on congestion and commute times, and therefore on the dizzying magnitude of home prices. These prices get less dizzying the more time the commute to San Francisco and Silicon Valley takes during morning rush hour.

In San Francisco and in Silicon Valley, house prices were supposed to explode, fueled by the lowest mortgage rates in nearly three years and by the IPO billionaires and millionaires from Uber, Lyft, and other companies that would suddenly be buying homes, a time-honored real-estate hype that had been proven wrong before (here is my take: Why the Wave of Mega-IPOs Won’t Bail Out the San Francisco & Silicon Valley Housing Bubbles). And little by little, the results are trickling in.

In San Francisco, the median price of single-family houses plunged 9.2%, to $1.6 million, from the record in June that had beaten by a hair the last record set in February 2018. The median house price is now 3.0% below where it had been a year ago and 9.2% below the peak. It’s back where it had first been in October 2017: 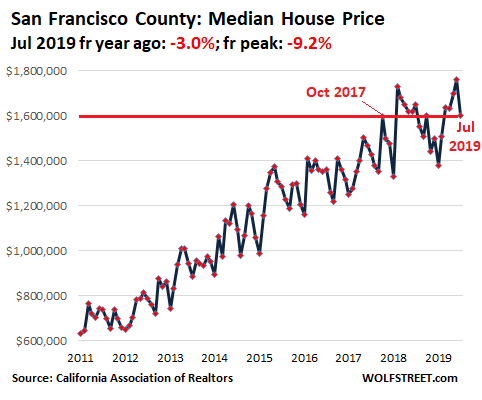 In San Mateo County, the northern part of Silicon Valley, the median house price in July fell 3.0% year-over-year, to $1.56 million. House prices are now down 11.7% from the peak in April 2018 and just above where they had first been in October 2017: 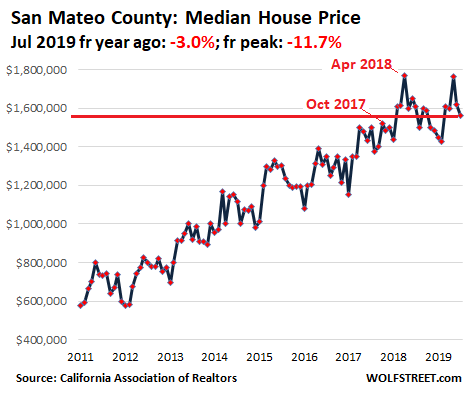 In Santa Clara County, the southern part of Silicon Valley and the most populous county of the Bay Area, the median price of single-family houses dropped 3.9% year-over-year, to $1.298 million. It is down 10.8% from the peak in April 2018 and just below where it had first been in December 2017: 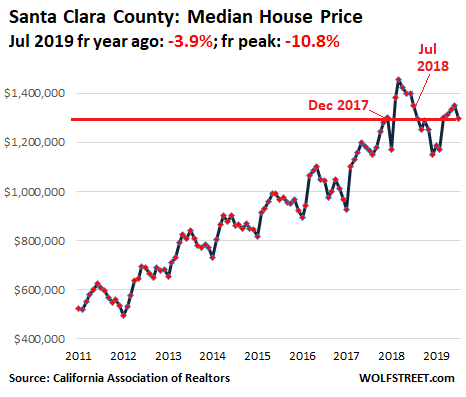 Marin County – think Sausalito, Mount Tamalpais, National Monument Muir Woods, Stinson Beach, and Highway 1 along the Pacific Coast – connected to San Francisco via the Golden Gate Bridge and ferry service, ranks among the most expensive places in the Bay Area. The median house price fell 5.1% in July from a year ago, to $1.257 million. This is down 13.3% from the peak in October 2018, is below where it had first been in March 2017, and is just 1.6% above where it had been in May 2016: 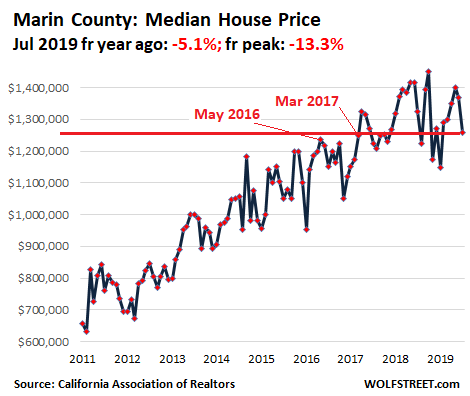 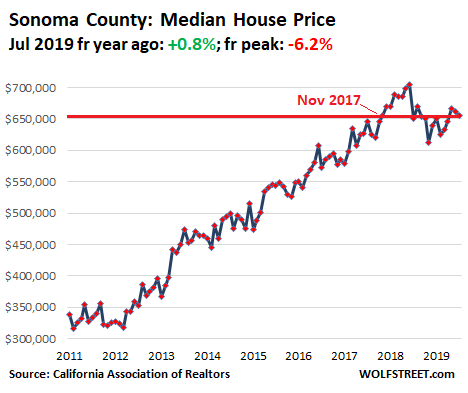 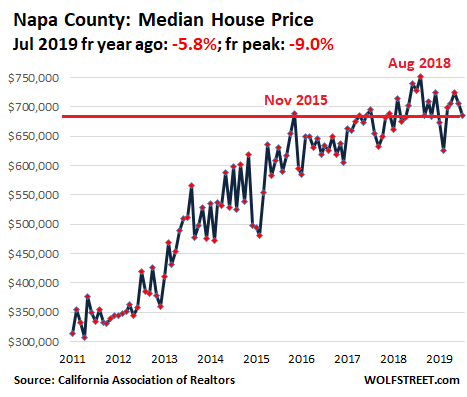 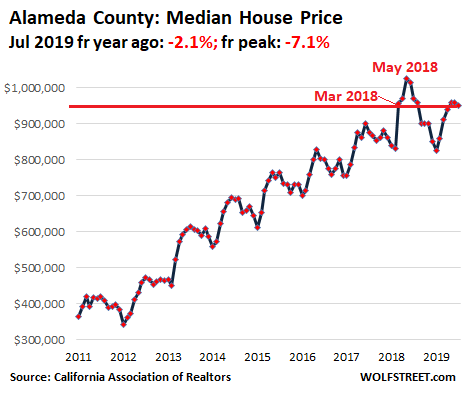 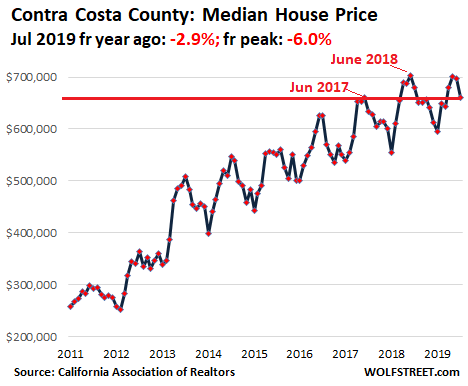 In Solano County, which extends inland toward Sacramento and is the least expensive county in the Bay Area, the median home price rose 2.4% year-over-year, to $465,000, a new record: 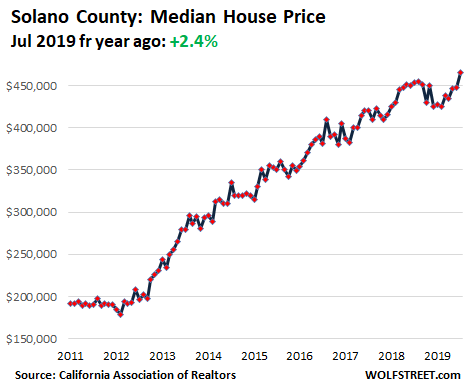 Cash-out “refi” hype is back full-blast. And for the first time since early 2006, people are doing it in large numbers. Read… Fuel for the Next Mortgage Bust?