My fancy-schmancy Fed Hawk-o-Meter, which analyzes the minutes of the Fed’s meetings for tell-tale signs of how the Fed sees the economy, jumped 5 points for the meeting on July 30-31, indicating that a further rate cut – even a cut of just a quarter percentage point – was not set in stone during the meeting: 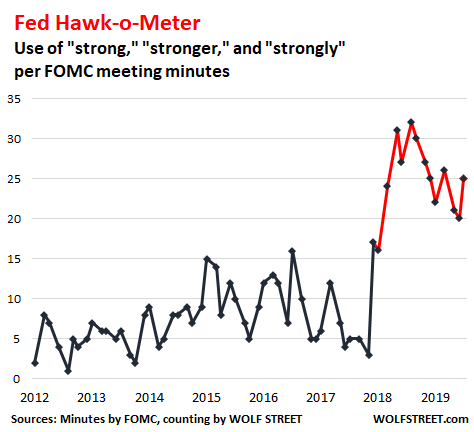 The Fed Hawk-o-Meter counts how often “strong,” “strongly,” and “stronger” appear in the minutes to describe the current economy. The meeting minutes are one of the Fed’s communication channels to the markets to avoid surprises on meeting day. The Hawk-o-Meter attempts to show in a chart what the Fed wants to communicate to the markets.

The words “strong,” “strongly,” and “stronger” appeared 28 times in the minutes of the July meeting. But three of them were “false positives” because they were used in a clearly different context, including a reference that a couple of participants “favored a stronger action.” I removed those three from the tally. Leaves 25, up from 20 at the prior meeting.

“Strong,” “strongly,” “stronger” appeared in phrases such as these:

Fed Chair Jerome Powell had already used “mid-cycle adjustment” during the post-meeting press conference to the confusion of the markets – instead of the expected iron-clad serial rate-cut promises. This kicked off a 5.6% five-day dive in the S&P 500 from its 3,027-point perch. And the S&P 500 remains 100 points below that perch.

In the minutes, the message, “we’re not on a serial rate-cut binge,” took this form:

Most participants viewed a proposed quarter-point policy easing at this meeting as part of a recalibration of the stance of policy, or mid-cycle adjustment, in response to the evolution of the economic outlook over recent months.

A number of participants suggested that the nature of many of the risks they judged to be weighing on the economy, and the absence of clarity regarding when those risks might be resolved, highlighted the need for policymakers to remain flexible and focused on the implications of incoming data for the outlook.

And trouble in the repo market made it into the minutes.

The minutes described a presentation on money markets and the Fed’s open market operations, and the issues now bubbling up in them (underscore added):

The spreads of the effective federal funds rate (EFFR) and the median Eurodollar rate relative to the interest on excess reserves (IOER) rate had increased some and become more variable over recent months, with a notable pickup in daily changes in these spreads since late March. Moreover, the range of rates in unsecured markets each day had widened.

Market participants pointed to pressures in repurchase agreement (repo) markets as one factor contributing to the uptick in volatility in unsecured rates. These pressures, in turn, seemed to stem partly from elevated dealer inventories of Treasury securities and dealers’ associated financing needs.

Dealers need to fund these inventories, which may be putting pressure on the repo market, according to the Fed’s minutes. Dealer inventories of Treasury notes with maturities between 1 and 2 years (top black line in the chart) quadrupled from $20.6 billion in October 2018 to $86.6 billion on August 7, 2019: 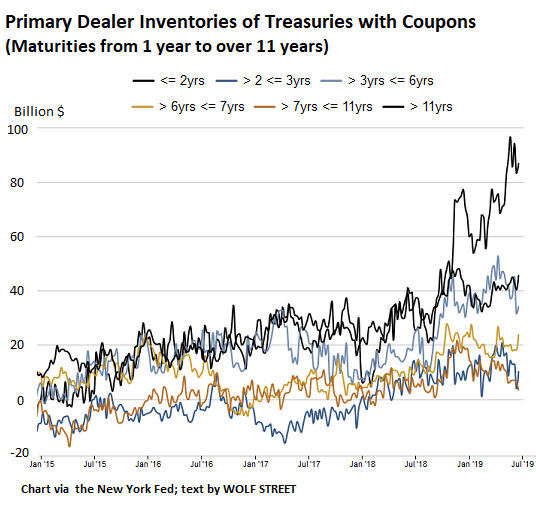 The Fed warns about business debts and leverage.

The Fed now rarely misses an opportunity to warn about business debt levels and particularly leveraged loans, and the “vulnerabilities” these high debt levels entail. Instead of doing anything about it, such as raising rates, it just warns about it. So here we go again:

The staff viewed the buildup in nonfinancial business-sector debt as a factor that could amplify adverse shocks to the business sector and the economy more generally. Within business debt, the staff also reported that in the leveraged loan market, the share of new loans to risky borrowers was at a record high, and credit extended by private equity firms had continued to grow.

The Fed also rarely misses an opportunity these days to warn about “elevated” asset prices and their potential impact on “financial stability” – meaning financial instability, such as a financial crisis:

Among those participants who commented on financial stability, most highlighted recent credit market developments, the elevated valuations in some asset markets, and the high level of nonfinancial corporate indebtedness.

Several participants observed that valuations in equity and corporate bond markets were near all-time highs and that CRE valuations were also elevated.

A couple of participants noted that the low level of Treasury yields—a factor seen as supporting asset prices across a range of markets—was a potential source of risk if yields moved sharply higher. However, these participants judged that in the near term, such risks were small in light of the monetary policy outlooks…

But there’s nothing to worry. Financial institutions, from bond funds to banks, are “viewed as resilient,” and leverage and funding risk were “still viewed as low despite some signs of rising leverage and continued inflows into run-prone funds.”

The last item – “rising leverage and continued inflows into run-prone funds” – is now regular feature on the Fed’s worry list. These are bond funds and leveraged-loan funds with illiquid assets that offer daily liquidity to their investors, who can buy and sell the funds on daily basis — a liquidity mismatch that makes these funds dangerous in uncertain times. And many of them experienced a run on the fund during the Financial Crisis and imploded. At least now the Fed can say afterwards, we told you so, which embarrassingly, they couldn’t say last time.

Now they’re clamoring for this NIRP absurdity in the US. How will this end? Read… How Negative Interest Rates Screw Up the Economy

113 comments for “Repo Market Problems & Ballooning Inventories of Treasuries at Primary Dealers Make it into the Fed’s Minutes. My Fancy-Schmancy “Fed Hawk-o-Meter” Jumps”